Democrats get the Gun Control They Voted For 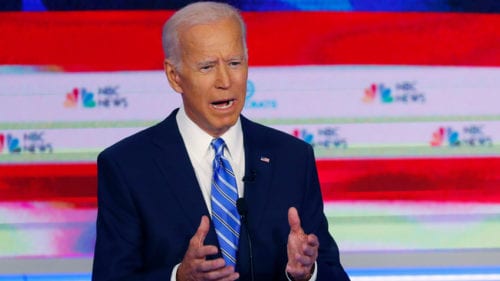 U.S.A.– -(AmmoLand.com)- Some of my friends are democrats. Many are gun owners. They call themselves “pro-gun” Democrats. I’m struggling to figure out what that means. So far, Democrat politicians are keeping their promise to disarm honest gun owners.

On the debate stage, presidential candidate Beto O’Rourke said, “Hell, yes, we’re going to take your AR-15, your AK-47. If it’s a weapon that was designed to kill people on the battlefield, we’re going to buy it back.” The crowd of democrat supporters at the debate cheered. The news media never corrected O’Rourke that despite sharing some parts, the guns owned by US civilians are not used by either the US military or by the combat arm of any other military on the planet. Biden said O’Rourke would be put in charge of gun-control. Biden said he fought the NRA and is coming for them (the NRA) again.

Vice President Harris fought for gun-control as the Attorney General of California. She fought for laws denying the right to carry in public. She said the second amendment applies to the militia but does not protect the right of individuals to keep and bear arms.

These are more than a few off-hand remarks that a candidate might make while trying to raise funds at a late-night cocktail party. Gun-control and confiscation is now a pillar of the democrat party. Hilary Clinton asked for it. Joe Biden and Kamala Harris promised it. Billionaire Democrat donors demanded it.

There was a time when we saw pro-gun democrats in office. Today, not a single democrat congressman has an “A” rating by the NRA. That begs the question of what it means to be for the right to keep and bear arms while you vote Democrat.

Politicians enact laws. That is what they do. Democrats enacted the gun-control legislation they promised. It wasn’t as if they had much of a choice. The Democrat party took hundreds-of-millions of dollars in campaign funds from anti-gun billionaire Michael Bloomberg. That wasn’t a donation; that was an investment to secure a political goal. Bloomberg funds the anti-gun industry across the US. Bloomberg expects a return on his investment.

This bill, H.R. 8, is designed to disarm you, not them. A single Democrat congressman voted against it.

You now have to ask the government to exercise your rights. Congress passed H.R. 1446. That bill said the government has 10 days to check on your criminal history. After those 10 days, you may apply to the FBI for an exemption and ask to receive your firearm. In theory, you may receive your firearm after an additional ten days if the FBI does not reply. We don’t know how the Federal Bureau of Alcohol, Tobacco, and Firearms will react when gun shops issue a firearm without FBI approval.

Democrat politicians said that H.R. 1446 would stop mass murderers. I have to remind us all that background check bills look backward in time. Mass murderers may plan their attack for years, but they never plan to repeat their atrocity. This bill would not have stopped mass murder, but it might disarm you.

If you don’t follow current events, then you might have missed how governments routinely breaks their own laws. By law, the Illinois State Police are required to issue Firearm Owners Identification cards in 30 days. In practice, they have stopped issuing them. There are similar laws in New Jersey and California. There is no penalty when the government breaks its own laws. In these cases, they seldom follow the law. Now, Democrats want the federal government to have the same power to do the same thing.

This isn’t an obscure matter of legal procedure. Politicians brag to the news media about the good a bill might do. We must study the harm the bill will cause when misused by corrupt special interests. Women have died at the hands of stalkers while they waited for government permits to protect themselves. The media never holds those politicians accountable. Democrats say they support working men and women, yet the gun-control bills they passed grant rights only to those who are willing and able to pay for them.

Criminals don’t apply for background checks. You do. Prohibition fails…every time. When this law fails to reduce crime, Democrat politicians will say we need more regulations to disarm you.

Politicians care only how you vote.

You may vote democrat and yet want to keep and bear arms. The politicians you elected don’t care what you want. Politicians don’t care how you feel or what you say. In fact, politicians care only how you vote.

This is the firearms prohibition that democrats across the country voted for. Unfortunately, this is only the beginning. There are many more gun-control bills to come.

The original article with sources is posted here. Rob Morse writes about gun rights at Ammoland, at Clash Daily, and on his SlowFacts blog. He hosts the Self Defense Gun Stories Podcast and co-hosts the Polite Society Podcast. Rob was an NRA pistol instructor and combat handgun competitor.

The post Democrats get the Gun Control They Voted For appeared first on AmmoLand.com.