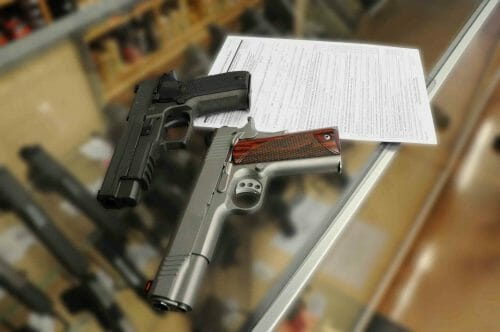 WASHINGTON, D.C. –-(Ammoland.com)- Leaked documents supplied to AmmoLand News from Gun Owners of America (GOA) show that discretion that Bureau of Alcohol, Tobacco, Firearms, and Explosives (ATF) agents have in recovering firearms from buyers that the FBI initially delayed in the National Instant Criminal Background Check System (NICS) then denied after the seller transfers the gun to the buyer has been curtailed.

If NICS doesn’t return a result (approve/deny) after three days, the federal firearms licensed dealer (FFL) can legally transfer the gun to the buyer. If, after the three-day period, the FBI determines the buyer that has taken possession of the firearm is a prohibited person, the agency notifies the ATF. The ATF agent reviews the results and determines if it is worth the time and effort to recover the transferred gun.

One example given to AmmoLand was a case of a 70-year-old man who had a non-violent felony conviction at 18. The agents determined that the man did not pose a threat and had a very low chance of committing a crime with the firearm. Since taking the gun would do nothing except strip the man of his right to bear arms, they decided not to take any further action.

Although ATF agents still technically have discretion, ATF Assistant Director of Field Operations, Thomas L. Chittum, III, sent a one-page memorandum to all Special Agents in Charge (SAIC) changing the process. According to the notice, the new regulations now require agents to update the case every 30 days within the month’s first ten days. Even if the ATF agents determine confiscating the firearm would not affect public safety, the agent still has to explain their reasoning every month, even if their reason never changes.

This change means the ATF agent that received the case of the 70-year-old man mentioned earlier in the article will have to update the case every month, explaining over and over why he decided not to confiscate the rifle. The only way the agent can stop updating the case is to recover the gun. The updating of the case is mandatory, and there is no way to close it out without taking the firearm.

Not only is updating the case mandatory, but the computer system requires it to be updated for the agent to do real work that does affect public safety. The system showed to AmmoLand News by the source doesn’t seem to have a way to bypass the updating of the case in the Case Management System. The agent must select the “NICS Delayed Denial Monthly Update.” From the drop-down management log tab.

The more delayed denial enforcement cases that the ATF gets, the more backed up the Case Management System and the agents get. The amount of work will increase over time, and the amount of busywork will be ever-expanding. The only way for the agents can stay on top of the requirement is to reclaim every gun from every delayed denial. The process removes the agent’s discretion without officially removing it.

Chittum does indicate why he thinks the old system was inadequate. Gun rights advocates see this move as an attempt to force ATF agents to confiscate firearms from people who made a single mistake decades ago. They worry this is a backdoor control method.

The ATF did not respond to our request for comment at the time of publication.