If President Biden Is in Charge, Why Would America Need a Gun Czar? 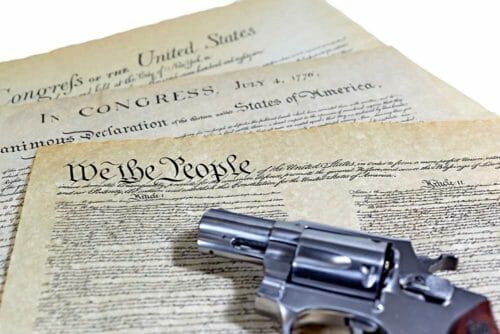 U.S.A. -(AmmoLand.com)- Congress is lining up behind billionaire-backed gun control groups demanding that President Joe Biden appoint a gun control czar to dictate to America just who, when, how, and how much gun rights they can actually exercise.

It begs a question, though. Isn’t President Biden supposed to be in charge? If he is, then it should be his policies for which he needs to answer to the American public. If he needs to appoint a political appointee, why?

The entire notion opens up a can of worms that Democrats who signed onto a letter should answer to the American people. When did fundamental pre-existing rights, that are protected by the Constitution, become something that needed to be parceled out by a partisan bureaucrat?

U.S. Reps. Joe Neguse (D-Colo.) and Lucy McBath (D-Ga.) led a letter to President Biden that was signed by 34 additional Members of Congress, demanding he “appoint a National Director of Gun Violence Prevention and empower this newly appointed official to create and chair an Interagency Task Force on Gun Violence Prevention.”

It would seem the president has the assistance to fight criminal misuse of firearms already. He’s got an attorney general, who oversees the Department of Justice. Within that, he’s got an FBI director to investigate federal crimes and an acting director of the Bureau of Alcohol, Tobacco, Firearms, and Explosives (ATF), which regulates firearms and the firearm industry and has law enforcement authority.

There’s been smashing success on operations by the Department of Justice to fight criminal misuse of firearms. The DoJ is still running Operation Legend, a sustained and cooperative law enforcement effort to fight crime. There’s also Operation Relentless Pursuit, a law enforcement initiative aimed at cracking down on crime in seven major U.S. cities. Those operations run alongside the DoJ’s Project Safe Neighborhoods, a collaboration between federal, state, and local law enforcement to identify violent crime and develop comprehensive answers to stopping it.

There’s not a shortage of initiatives to fight crime or create pathways for combine federal resources with local law enforcement. The call for this “gun czar” isn’t about crime. It’s about guns.

The intent of appointing a “gun czar” isn’t to combat crime. Clearly, the resources and infrastructure are there and the Department of Justice is doing this. The calls are to control guns and to have it be done by a partisan political appointee who isn’t accountable to the people. Members of Congress are merely echoing what the gun control group March for Our Lives has already demanded. That group, funded by antigun billionaire Michael Bloomberg, demanded a “gun czar,” along with $1 billion of taxpayer money to enact their radical gun control agenda that was actually captured in a “demand list” for the Biden-Harris administration. The group’s policy director Max Markham said he wanted a cabinet-level position to “Highlight the executive side over the legislative side.”

The problem with their entire demand is that they are attempting to ration a right that’s not theirs to measure. The right to keep and bear arms is a pre-existing right. It’s one that every American has as their birthright, endowed by their Creator. The Constitution’s Second Amendment recognizes this right existed before the founding of the U.S. government and it isn’t for lawmakers, the President, or an appointed “czar” to measure out. No such bureaucrat would be tolerated to tell Americans when they’ve had enough free speech or enough free exercise of their religion.

Delegating the Second Amendment to a second-class right or a privilege that a bureaucrat would be able to turn off the spigot to is an abdication of the responsibilities of the President of the United States. It’s also ceding a right that belongs to the people to an unelected and unaccountable “czar” or king of guns.

Americans threw off a king once who attempted to seize guns and powder in Lexington and Concord. There’s no room to invite one back.

The post If President Biden Is in Charge, Why Would America Need a Gun Czar? appeared first on AmmoLand.com.