The NSSF On The Moronic Myths of Microstamping 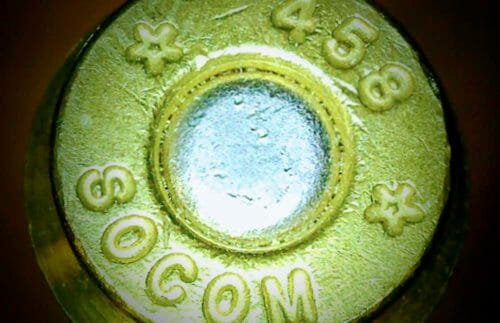 U.S.A. -(AmmoLand.com)- Microstamping has reared up as gun control schemers elevate it as a sophisticated means of “gun safety,” a sly euphemism for gun control. Proponents of the unworkable, unreliable, and ineffective concept keep their heads in the sand regarding the feasibility of microstamping mandates because they can’t face the truth. It doesn’t work.

Microstamping is unproven and unworkable technology, using a laser to imprint a shallow unique identifying code on a handgun’s firing pin, transferring the mark to a spent cartridge casing once it has fired. Gun control politicians push the “technology” to “reduce gun violence.” In their minds, microstamping connects the dots on crime, a criminally misused firearm, and the criminal. Except that’s not realistic and forcing gun manufacturers to implement microstamping on new guns, or retrofit existing firearms, only limits lawful firearm ownership.

Todd Lizotte, who holds the patent for the sole-source microstamping technology, recognized this reality in a peer-reviewed study. “Legitimate questions exist related to both the technical aspects, production costs, and database management associated with microstamping that should be addressed before wide-scale implementation is legislatively mandated.”

Third-party researchers agree. Forensic firearms examiner Professor George Kristova wrote, “Implementing this technology will be much more complicated than burning a serial number on a few parts and dropping them into firearms being manufactured.” The University of California at Davis, hardly a gun-rights redoubt, reported, “At the current time it is not recommended that a mandate for implementation of this technology be made.”

A National Academy of Science study concluded that “the durability and survivability of markings on the bullet are still major concerns. Bullets would also be likely to suffer the corrosive effects of blood and other substances.” An Iowa State University study stated that “legitimate questions exist related to the technical aspects, production costs, and database management associated with microstamping that should be addressed before wide-scale implementation is legislatively mandated.”

That bottom line is microstamping doesn’t work. Lizotte himself agreed that alphanumeric codes are often illegible under even perfect conditions. Electron microscopes couldn’t detect legible codes in testing. Even under perfect conditions, it would take at least 10 spent cartridges to make an “educated guess” to piece together a legible code. More practically, this technology can easily be defeated with sandpaper or a nail file as the microstamping mark is only 25 microns (half the diameter of a human hair). Criminals already obliterate serial numbers etched into a firearm frame.

California ignored these impossibilities and passed a dual-placement microstamping mandate in 2007, despite the firearm industry testifying the technology doesn’t work. Then-California Attorney General and now Vice President Kamala Harris certified the law in 2013, along with California’s Roster of Handguns Certified for Sale. Since then, firearm manufactures have introduced no new handguns to California. Democratic Gov. Gavin Newsom signed AB 2847 into law in 2020, reducing the microstamping requirement to a single place, but speeding up the number of handguns falling off the list of those approved for sale in California. For every new handgun added to California’s Roster of Handguns Certified for Sale, three older models must be removed. When the initial microstamping law took effect, there were 953 pistols on the roster. As of November 2020, there are only 497, as any modification to a model even to improve the safety and reliability of a handgun constitutes a new model requiring microstamping.

California is the only state to enact microstamping, but other states are considering it. Connecticut tried once before in 2009 but the bill was defeated. Democratic state Rep. Jillian Gilchrist introduced HB 5584, trying to require the impossible technology in her state again this year.

California’s considering going back to dual-placement requirements, which it just rolled back a year ago. Democratic Assemblyman David Chiu, who wrote the single-placement law, introduced a bill just weeks ago to up the requirement back to two places on a cartridge. It’s still unworkable and the requirement to speed up the removal of handguns off the roster remains. It was never about solving crime. It has always been about eliminating handguns.

On the federal level, microstamping legislation was introduced in the U.S. House of Representatives in 2008 by then-Congressman Xavier Beccera (D-Calif.), who became California’s attorney general after Vice President Harris won election to the Senate. Becerra is now President Joe Biden’s Health and Human Services Secretary nominee awaiting U.S. Senate approval. He would join an administration itching to throw roadblocks in front of the firearm industry and deprive law-abiding Americans of the ability to exercise their Second Amendment rights.

NSSF is the trade association for the firearm industry. Its mission is to promote, protect and preserve hunting and shooting sports. Formed in 1961, NSSF has a membership of thousands of manufacturers, distributors, firearm retailer s, shooting ranges, sportsmen’s organizations, and publishers nationwide. For more information, visit nssf.org

The post The NSSF On The Moronic Myths of Microstamping appeared first on AmmoLand.com.