Is It Time to Replace Romney? 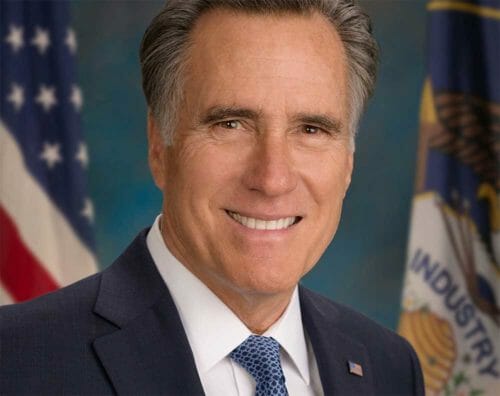 Utah/Washington, DC – -(AmmoLand.com)- Senator Mitt Romney (R-UT) has drawn the ire of many Second Amendment supporters with votes to convict President Trump during both impeachment trials. But what about his track record on the Second Amendment? During the 2012 primary campaign, his track record as governor of Massachusetts came under fire, particularly from Gun Owners of America.

The reality of Romney’s tenure as governor is somewhat more complicated than GOA’s release paints it. As governor, Romney did not have a very strong hand. How bad was his position in political fights? According to Ballotpedia, the Massachusetts General Court, consisting of a state House of Representatives of 160 members and a State Senate of 40 members, was controlled by Democrats, with the statehouse seeing a roughly 7-to-1 ratio of Democrats to Republicans after the 2002 and 2004 elections, while the state senate had a ratio of 5.66-to-1. Historically, the only time Republicans held even a quarter of the seats in a legislative chamber was when they had 10 seats in the State Senate after the 1994 elections. These are clearly veto-proof margins, and the margins have been that way for almost three decades.

Gun Owner’s Action League, the Massachusetts State Affiliate of the National Rifle Association, takes a different view. In a February 2007 report, they noted some “rather serious political missteps” early on his single term as governor, but noted how he started to overcome them by the end of his first year in office. So, given the situation Romney faced, he did pretty well, making some marginal improvements in the Bay State’s onerous gun laws. Sometimes, the best Second Amendment supporters can do is to limit the damage when the political situation is bad.

As a presidential candidate, Romney was miles better than Obama on the issues, although in some cases, it was clearing a pretty low bar. He didn’t raise the BATF gunwalking scandal on the campaign trail, but he did confront Obama on it during one of the debates. Did it contribute to his defeat? Maybe, but the IRS targeting of the Tea Party may have had a bigger role, according to an AEI scholar. His track record in the Senate is frankly disappointing, coming from a solidly “red” state like Utah.

Romney has not co-sponsored legislation like concealed carry reciprocity or improvements to the protections for travelers enshrined in the Firearms Owners Protection Act. The only bill he co-sponsored that was even tangential to Second Amendment issues was the John D. Dingell, Jr. Conservation, Management, and Recreation Act. He voted to confirm Amy Coney Barrett and some appeals court judges, but that is a bare minimum. It would be one thing if he were representing a not-so-safe Senate seat the way Susan Collins is in Maine, but Utah is not likely to replace a pro-Second Amendment Senator with an anti-Second Amendment extremist.

The fact is, Mitt Romney, while not outwardly hostile, has been a huge disappointment. Normally, a non-hostile incumbent would deserve re-election, but given the state he represents, it is very understandable that Second Amendment supporters would want an upgrade. Furthermore, Second Amendment supporters should support the NRA’s Institute for Legislative Action and Political Victory Fund to ensure that the current anti-Second Amendment regimes in the House, Senate, and White House are defeated at the ballot box as soon as possible.

The post Is It Time to Replace Romney? appeared first on AmmoLand.com.