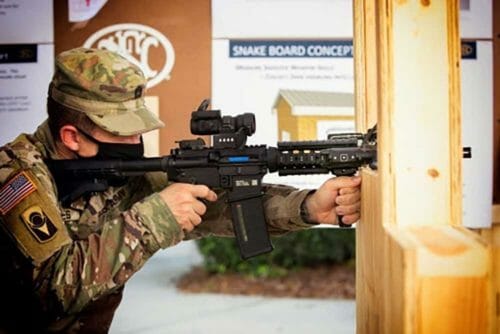 U.S.A. –-(AmmoLand.com)- FN America, LLC, maker of the world’s most battle-proven firearms, is pleased to announce that the company has been selected to participate in the U.S. Army’s Expeditionary Warrior Experiment (AEWE), taking place March 9, 2021, at Fort Benning, Georgia.

Following a highly successful AEWE demonstration of the company’s emerging technology last December, FN will further exhibit their e-Novation suite of revolutionary weapon enablers that provide innovative and disruptive technology that resonate and align with the U.S. Army’s modernization efforts.

“For the past 130 years, FN has delivered small arms solutions to militaries worldwide. At the heart of our business is the goal of improving and enhancing solider capabilities,” said Mark Cherpes, President and CEO for FN America, LLC. “This demonstration for AEWE allows us to further showcase our newest technology that facilitates training solutions and enables new possibilities in battlefield situational awareness. We are looking forward to demonstrating these emerging technologies for the U.S. Army.”

“We are extremely proud to have been invited to demonstrate our e-Novation solutions,” said Todd Smith, Vice President for FN’s military operations. “FN leads the way in integrating enablers onto the weapon platforms and the technologies we are demonstrating at AEWE directly meet the U.S. military’s requirements and approach to Soldier as a System.”