What’s Up and Coming at EAA Corp 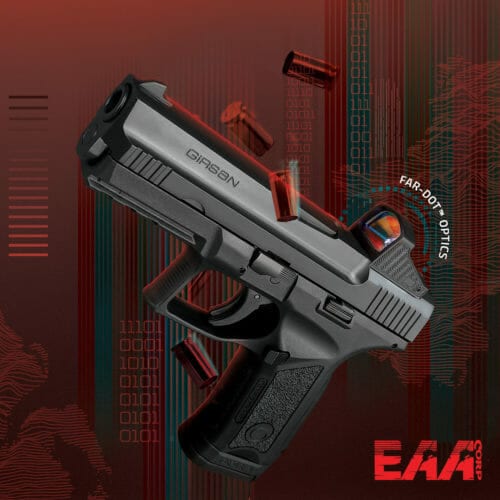 Cocoa, Fla. (February 2021) – EAA Corp.’s CEO Keith Bernkrant returns to the CloverTac podcast to update host Chris Dover and his audience on how EAA Corp. is doing during the pandemic and what’s on the radar for new products in 2021 and 2022.

Business in the firearms industry has been brisk due to a perfect storm of events: the COVID-19 pandemic, increasing protests and riots across the country, and the presidential election. As a result, new gun ownership is exponentially on the rise. For the gun and ammo companies, this has resulted in unprecedented sales figures and empty shelves at most retailers’ stores. Bernkrant discusses how logistics during this high-demand period has kept EAA Corp. busy and assures listeners that EAA Corp. has been highly adaptable and capable of meeting its distribution channels’ needs.

From the popular MC312 Sport Shotgun with optics to Tanfoglio and Girsan products, Bernkrant discusses products in the works, including Girsan’s new MC9 Optics pistol with FAR DOT. EAA Corp.’s future plans for the Girsan line include producing Girsans (exception will be the Regard pistol line) with no optics adaptor plate; instead, the slide will be machined for optics. The MC9 Optics pistol is the first product of the new production change that incorporates the proprietary optic solution in the FAR DOT sight. Bernkrant spoke to how EAA Corp. is extremely involved in the design of products, including the new sights and how they integrate with the guns. The FAR DOT sight system has resolved the problem of finding the dot; therefore, the user does not have to raise their head off the gun sightline, making for quick target acquisition and repeat shots. Bernkrant also alluded to the future of FAR DOTs being illuminated for low to no light use.

EAA Corp. continues to supply its distribution partners with popular, affordable firearms for hunters and sport shooters. Although 2021 promises to be challenging, Keith Bernkrant informed the CloverTac listeners that EAA Corp. was busy working on a new optic pistol and long gun options, double-stack 1911’s and new 10mm pistol models.

To listen to the CloverTac podcast, tune in on YouTube, iHeartRADIO, or Spotify.

Based in Florida and founded in the early 1990s, European American Armory Corporation (EAA Corp.) has brought value to firearms owners with an array of right-priced, affordable handguns, rifles, and pistols from respectable international manufacturers. EAA Corp’s mission has always been “good quality products at reasonable prices.” www.eaacorp.com

The post What’s Up and Coming at EAA Corp appeared first on AmmoLand.com.