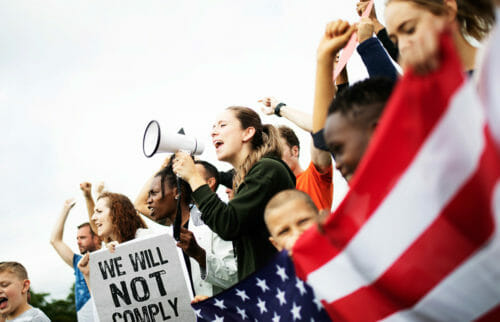 USA – -(AmmoLand.com)- On Saturday, February 20th, 2021, I had the honor of once again addressing the Riders USA Second Amendment Rally at the State Capitol in Phoenix. This is the second year I’ve helped MC the annual event and the third year that I’ve been a speaker.

With the events at the US Capitol last month, some people were concerned about our rally, but I never had a doubt. We had a great, record turnout, and no problems at all.
Below is the text of my speech, and you can watch a video of it on The Firearms Coalition Facebook page. If you enjoy it, please share it on your social media.

It’s such a pleasure to be with you once again this year.

The forces arrayed against us are formidable: The whole of the traditional media, big tech, billionaires, politicians, academia, and a plethora of political organizations… They have money, influence, and a voice that reaches into virtually every corner of our society. They also have the combined advantages of ignorance and emotion. But there’s one thing that they don’t have and that cannot be replaced.

They don’t have your voice, your vote, your knowledge, your sphere of influence, or your commitment to liberty and a righteous cause.

You are the Gun Lobby! You are the guardians of the Republic, defenders of the Constitution, the Sons and daughters of Liberty, and the keepers of the flame of freedom.

Ronald Reagan warned that freedom is always just one generation away from extinction, and he was sadly right. Today we see the proof as freedom teeters on the brink, with a cadre of confused, ignorant, “useful idiots,” pushing as hard as they can to tip the balance and send freedom toppling down into the same pit of despair that brought death, destruction, and hopelessness to tens of millions in the Soviet Union, China, Cambodia, Cuba, Venezuela, El Salvadore, and so many other places around the world.

But there’s something standing in their way and keeping liberty from crashing over that cliff – YOU, the Gun Lobby.

You and I don’t agree on everything. We might not even agree on most things. But we do agree on one thing, that the right of the people to keep and bear arms, shall not be infringed. And as long as we agree on that, we can work out everything else. The real problems start when the people are disarmed and there is one contingent with a monopoly on the tools of violence.

The old saying; “An armed society is a polite society,” is absolutely true, and as long as we all have the potential to be armed, we can rationally discuss and debate our differences and philosophies. But if We the People allow ourselves to be disarmed, then our positions and beliefs no longer matter. We can be silenced. Canceled… Our ideas, beliefs, and desires, become irrelevant, because “they” no longer have to listen to us. Like the people of Hong Kong, we’ll no longer have the means to demand that our voices be heard.

Of all the movements and philosophies that drive politics today, the Gun Lobby is unique, because we aren’t asking for anything other than to be left alone and that the Constitution be respected. We don’t want government funding. We don’t want special privileges. We don’t want tax breaks… We just want our rights, as spelled out in the Bill of Rights.

Our opponents want restrictions, limits, tracking, investigation, taxation, stigmatization, and control. Not just on our guns, but on ourselves, our future, and our posterity.

Joe Biden is busy talking with gun control zealots about what sorts of restrictions and limits he can get away with implementing through Executive Orders, and what legislation he’s going to try to force through Congress, but he’s not asking US what new laws and regulations we’ll put up with and obey. He’s not paying attention to the thousands standing up every day and to join millions of others in declaring; “I will not comply,” and “Not one more inch.” He assumes that today’s American gun owners are just like yesterday’s American gun owners, who blustered and postured, but then made concessions and just swallowed more restrictions, with nothing more than complaints in response.

I’ve got news for you Mr. Biden: You’re dealing with Gun Culture 2.5 now, and if you think you can steamroll us like you steam-rolled our predecessors, with nothing more to pay for it than a good finger-wagging from Wayne LaPierre, you’ve got another thing coming.

Let me be clear — This is not a threat of insurrection.

This is a warning, that actions have consequences. As someone famous once said; “Don’t start nothin’, won’t be nothin’.” No sane person wants a civil war, and we’re no exception. But those who would trample our rights, limit our freedom, interfere with our ability to protect ourselves and our families, need to understand that we won’t just quietly acquiesce to their unreasonable demands. We’re generally among the most law-abiding people in the country, but that will only be true as long as they don’t pass laws that we can’t and won’t abide by. And I promise you, Mr. Biden, when you start making martyrs of our people who refuse to obey your unconstitutional edicts, you will unleash the whirlwind and reap what you have sown.

My fellow Americans, you are the Gun Lobby. You are our front line of defense against idiot politicians pursuing destructive policies based on lies, distortions, and irrational fears. It’s up to you to educate your elected servants about the fact that gun control only hurts the good guys, and if those elected servants refuse to listen and learn, then it’s up to you to replace them.

You are the Gun Lobby. The future of the republic is in your hands.

Make sure your elected servants hear you and know your name. Not just the ones that agree with you, but the ones who will never agree with you. Don’t threaten or insult, but make sure they understand that what they’re talking about would turn our nation’s best into criminals, and we won’t stand for that.
You are the Gun Lobby. The future’s in your hands, and I am proud to be counted among you.

Thank you. God bless you, and God Bless the United States of America.