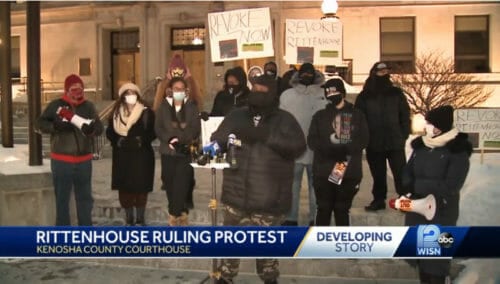 U.S.A. –-(AmmoLand.com)- On Friday evening, 12 February, a group of about a dozen far-left protestors, allied with the DA’s office in Kenosha, called for the removal of Judge Bruce Schroeder, because the Judge followed the rule of law and refused to facilitate the political persecution of Kyle Rittenhouse.

Rittenhouse is being tried for the self-defense shooting of three men who attacked him as he fled from mobs during the Kenosha riots. Judge Schroeder required the DA to follow the rule of law.

Far Left activist Erica Ness, who is white, made these incendiary claims:  From kenoshanews.com:

“Yesterday’s (Thursday) hearing sent a clear message to violent white supremacists: come to Kenosha to kill protestors, and you’ll be supported by the police and the court system,” said Erica Ness, an organizer with Leaders of Kenosha. “Meanwhile, Black and brown folks are having their doors kicked in and are dragged back to jail for the smallest infractions against their bond. This is a gross display of bias, and we’re calling on Judge Schroeder to resign and for Kyle Rittenhouse to be prosecuted to the full extent of the law.”

If you wish to understand the protest, watch the hearing for the full 52 minutes.

Ness does not want the rule of law followed. She does not want due process. She wants Kyle Rittenhouse to be punished before any trial, because, apparently, he dared to defend himself against a violent mob that attacked him as he fled. Ness is quoted here.  From WISN.com:

“The judge has said, ‘OK sure, you broke that condition, you didn’t tell us your address, you lied, you don’t have to give people your address anymore.’ That is unprecedented,” Ness said. “This is someone who killed two people in our community and this is someone who continues to galivant around and flash white supremacist symbols and embolden more of this violence.”

At the hearing, Judge Schroeder repeatedly showed these claims (also made by the prosecutor) were false. People routinely forget to file the change of address for the postal delivery, which is the only thing that was missed by Kyle Rittenhouse’s legal team. People who do so are never arrested and jailed for this error, especially when they always appear at court as required.

Ness appears to believe that because her political prosecutor allies have claimed a person has violated the law, that person no longer has any rights. She wishes the Constitution to be ignored when she wants someone she hates to be punished.

Judge Schroeder refused to be intimidated by the mob.  From radio.com:

Though Schroeder ordered Rittenhouse to give the court his address, which would be kept under seal but refused to increase his bail and have him jailed. The judge also acknowledged Friday’s protesters.

“This case is not going to be decided by demonstrators of one type or another. And, frankly, it’s not going to affect anything that I do,” Schroeder said.

The left does not accept the rule of law and due process are how Western civilization has achieved the enormous progress it has made in the last 250 years.

The abandonment of the rule of law and due process leads, inevitably, to Venezuela, Cambodia, and the old Soviet Union.

Judge Schroeder ordered Kyle’s physical location be kept secret from the District Attorney’s  Office, so as to prevent physical violence against Kyle and his family.  The District Attorney Binger was told necessary contact with Kyle can be made through the Court, or by the Sheriff’s department.