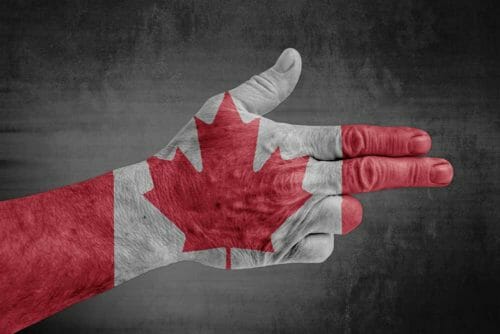 U.S.A. -(AmmoLand.com)- The Great Northern Gun Grab is about to begin.

The United States’ northern neighbor is bracing for firearm confiscation. What would seem unthinkable just a couple of years ago is now planned to radically shift gun ownership on America’s doorstep in just weeks.

Prime Minister Justin Trudeau announced that sweeping new gun control laws would be coming “in months” that would drastically change how firearms are controlled in Canada. The Liberal Party leader made the unilateral announcement that the government would confiscate more than 1,500 makes and models of firearms under an expanded “assault weapon” definition. It’s an estimated 150,000-200,000 firearms.

Prime Minister Trudeau fulfilled his ill-advised promise by announcing the introduction of a bill in Canada’s Parliament, labeled C-21, that would usher in crushing gun restrictions. Included in the bill is everything from a provision to allow anyone to petition a police chief to revoke a firearm license and the courts to seize firearm for up to 30 days. The bill includes a magazine ban for handguns with a capacity greater than 10 rounds and centerfire rifle magazines with a capacity greater than five rounds. It would impose a strict regimen for those who choose not to participate in the confiscation program with onerous and nearly impossible requirements to keep their firearms. A two-year amnesty period for owners of these now-banned firearms will expire in April 2022.

The biggest concern of this gun control push is the outright confiscation of firearms by the government. Prime Minister Trudeau and his allies are labeling it as a government “buyback.” However, this is using Canadian taxpayer funds for the government to buy back something it never owned in the first place.

More shocking is that no government official will put a price tag on what this would cost. Public Safety Minister Bill Blair said the government will have a better picture of the cost when it knows how many owners want to “sell” their firearms and for how much, according to Canadian Broadcasting Channel  (CBC) report. Minister Blair guessed it would run between $300-400 million dollars, if 150-200,000 gun owners demand $1,300 per firearm. Minister Blair earlier pegged the cost at $600 million.

Critics argue the cost would be much higher. Those critics were right about Canada’s previous gun registration scheme being a colossal failure with an enormous price tag. That was pitched at costing only $2 million but ran over $2.7 billion before being scrapped. The same critics are pointing to New Zealand’s confiscation model and saying realistic estimates put the Canadian cost at $1.6-$5 billion in just the first year. That’s just administrative costs, not including the bounty Prime Minister Trudeau would pay for each firearm.

Canadians who don’t participate in surrendering their firearms to the government will be forced to endure a rigorous set of rules and inspections to keep their firearms – while they can and while they’re alive. Those who don’t hand over their firearms could keep them under strict conditions to not use, import, further acquire, sell or bequeath them. Those individuals would also be required to complete the Canadian Restricted Firearm Safety Course and upgrade their licenses to a “Restricted Possession and Acquisition Licence.” Of course, this would incur all associated course and license fees, along with registering any firearms with the Firearms Registrar, complying with enhanced storage requirements and periodically providing information on firearm storage to ensure compliance.

The proposed confiscation law would be so much more than just a gun grab. It would also give municipalities the option of enacting their own local ban on handguns. Some local laws might not go that far. Local laws might only regulate home storage of handguns, requiring them to be stored at shooting clubs and ranges. This would create a patchwork of differing gun control laws and pitfalls for Canadian gun owners. Enforcement would become a nightmare.

Matt DeMille of Ontario Federation of Anglers and Hunters, told the CBC, “Adopting measures across the province in a patchwork is going to be very difficult for people to understand.” Conservative public safety critic Shannon Stubbs added, “This part of the bill doesn’t address the major problem, which is the illicit use of illegal guns in crime.”

Another provision in the bill would make it illegal to advertise a firearm that depicts violence against a person. Read strictly, that would make it a crime to advertise a gun as a self-defense tool. Instead of taking on the criminals who misuse firearms, Prime Minister Trudeau would lock up advertisers who tell his citizens they don’t have to be willing victims and can use firearms to defend themselves.

No Right, Not Right

This sounds like a dystopian fairy tale, but the reality is this is happening on the doorstep of the United States. Minister Blair made it clear why Prime Minister Trudeau is able to get away with it.

“Gun ownership in Canada, in this country, is a privilege and not a right,” Minister Blair explained to Canada’s Global News. It’s a privilege that’s predicated on the strict adherence to our laws, our regulations, and our restrictions.”

That’s not stopping opponents from saying Prime Minister Trudeau is overstepping. The Canadian Association of Chiefs of Police said it won’t support a plan for handgun bans. Vancouver police chief Adam Palmer heads the organization and previously said there are laws against the illegal use of handguns. Further gun control laws won’t solve this problem.

In light of President Joe Biden’s gun control wish list, it’s worth noting the importance of the 27 words of the Second Amendment. It’s also worth watching the cost of dollars and rights an out-of-control gun control agenda can do to a nation’s citizens.