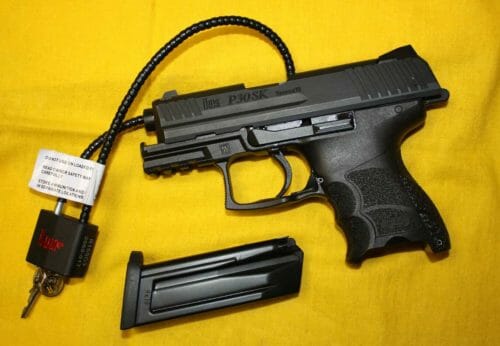 U.S.A. –-(AmmoLand.com)- A three-judge panel for the Washington State Court of Appeals, Division 1 has ruled unanimously that a so-called “safe storage” mandate adopted by the City of Edmonds violates the state’s 36-year-old preemption statute, in a lawsuit filed by the Second Amendment Foundation and National Rifle Association.

SAF founder and Executive Vice President Alan Gottlieb called the win a “significant victory for Evergreen State gun and privacy rights.” The case is known as Bass v. City of Edmonds and the ruling may be read here.

“Today’s ruling is an important victory for the people of Washington,” said Lars Dalseide, NRA Washington state spokesman. “Hopefully jurisdictions like Edmonds will realize that violating the Washington State Constitution is neither legal nor in the best interest of personal protection.”

The unanimous 16-page ruling was authored by Acting Chief Judge Beth Andrus, with Judges Bill Bowman and Lori Kay Smith concurring. It strongly upholds Washington’s preemption statute, first adopted in 1983 and strengthened in 1985. This law has been used as a model for similar preemption laws in other states. According to the anti-gun Giffords Law Center, more than 40 states have preemption laws.

“Washington lawmakers wisely adopted state preemption more than 35 years ago, Gottlieb observed. “The language is clear and unambiguous. Local governments cannot adopt or enforce their own firearms regulations that are more restrictive than state statute. The City of Edmonds knew this when the council adopted the storage requirement.”

His observation squares with what Acting Chief Judge Andrus stated in the ruling:

“We…conclude that the legislature’s express preemption of ‘the entire field of firearms regulation’ is unambiguous and necessarily extends to regulations of the storage of firearms.”

Edmonds adopted the ordinance after the City of Seattle passed an almost identical mandate, apparently emboldened by an earlier victory in a legal challenge to their gun and ammunition tax, which last year brought in revenue of $184,836, the highest total in the six-year history of the tax, but far short of original revenue forecasts.

Former Seattle Councilman Tim Burgess championed the tax, declaring in mid-2015 it would bring in an estimated $300,000 to $500,000 annually but it has never come close. The tax was supposed to fund efforts to reduce so-called “gun violence,” and in that regard, it has been a complete failure.

Last year, the tax brought in $184,836, but Seattle’s body count soared to 52, according to Seattle Police Department data.

So far, no Seattle official has acknowledged the gun tax failure. The 2020 murder count—not all of which involved firearms—was the highest number of killings in many years.

SAF and NRA are suing Seattle over the storage requirement, and the same appeals court last year allowed that lawsuit to move forward. The Edmonds ruling sends a pretty clear signal Seattle has overstepped its authority.

“Let’s be clear about something,” Gottlieb emphasized in a prepared statement. “Edmonds didn’t adopt this safe storage mandate in the interest of safety, but rather to challenge and erode, if not irreparably dismantle the state preemption law. The city has no business dictating to citizens how they should store firearms in their own homes.”

Gottlieb has a point. How can such a mandate be enforced? Some years ago, when a state lawmaker proposed legislation that included unannounced visits by police to the homes of gun owners to determine whether firearms were being safely stored, a columnist for the typically anti-gun Seattle Times took the idea to the task. At the time Gottlieb observed, “This is the United States, not a police state.”

Evergreen State gun prohibitionists are not happy with the Edmonds ruling. Gottlieb rubbed a little salt in their wounds noting, “State preemption is the most common-sense approach to firearms regulation there is. It provides uniformity on gun laws from one state border to the other. Whether you live in Edmonds or Ephrata, the gun laws are the same.”

Still, the Everett Herald quoted Edmonds Councilwoman Adrienne Fraley-Monillas offering a familiar emotional argument, “Any time you lose in court it is a disappointment. If this ordinance may have saved a child’s life because a parent locked away a gun it is worth it.”

State legislators from Seattle have been attempting for several years to unravel state preemption, but they’ve repeatedly failed.