Theresa Inacker This Week on Riding Shotgun With Charlie #96 ~ VIDEO 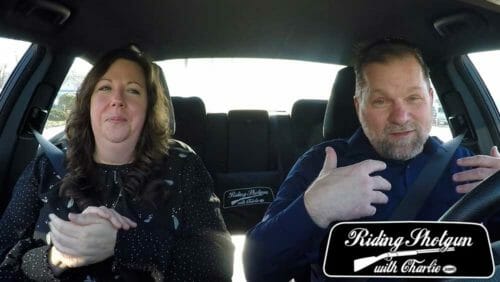 U.S.A. -(AmmoLand.com)- Theresa Inacker has done some cool things…I mean besides coming Riding Shotgun! She hunts pheasants.  She hangs out with Dick Heller. And she puts CNN”s Chris Cuomo in his place.  And it’s all in a day’s work for her.

I was heading down to New Jersey for a couple of other interviews and reached out to Theresa and she agreed to be on the show. Like many people, Theresa didn’t grow up in a household with or around firearms, but she had an uncle that would take her shooting to bust clays when she was young. Later in life, she decided it was time to be a gun owner. She lives in a rural area with a number of wildlife around her property. Once she learned how difficult the process is to buy a gun, how much red tape, and some of the nonsense you have to go through, she got involved.  The process in New Jersey is very unjust and that got her interested in being an activist.

The process in New Jersey is supposed to be 30 days. But that almost never happens, even pre-covid. It would take months. She said in New Jersey, that you own firearms on your own peril. After you find out that 30 days is not 30 days in a row, the outrage of denying your Rights takes over. Besides the regular process, the NCS check is not instant.  New Jersey does their own background checks when they get to them, which is never a rush. The truth is that New Jersey does not want its law-abiding, background check passing citizens

Shooting shotguns in a trap, sporting clays, and 5-stand, lead Theresa into a pheasant hunting trip with the Coalition of New Jersey Firearms Owner (CNJFO).  Her connection to CNJFO’s founder David “Rosey” Rosenthal (RSWC #049) led her to The DC Project with Dianna Muller (RSWC #059).  The connection to Dianna Muller led her and other DC Project members to sitting behind Dianna when she testified in front of Congress and proclaimed “I will not comply”.  Which led to Theresa meeting and hanging out with Dick Heller.

Theresa did get a chance to attend and ask a question at a CNN Town Hall with Chris Cuomo.  After hearing from the anti-gun side, she asked the producers if she was going to be able to ask her question.  When she did, she kind of let them have it. Kind of.  They weren’t sure how to reply to her.

It is beneficial for everyone to hear about the 2A Rights battles in states like New Jersey and Massachusetts so that people in ‘free America’ learn that our Right to own, purchase, and even carry is under attack.  And we can’t just run to a different state to avoid the fight. The fight needs to be in these battleground states so we hold the line.

Favorite quotes:
“People don’t think of us as the gun-owning people. We’re definitely not the gun-toting people because we’re not allowed to do that.”
“Someone has to stand and fight. You can’t run away.’
“They’re (Moms Demand) are operating by a lot of fear. There’s a lot of misinformation.”
“Their feelings don’t trump my ability to defend my life and my daughter’s life.”

The post Theresa Inacker This Week on Riding Shotgun With Charlie #96 ~ VIDEO appeared first on AmmoLand.com.