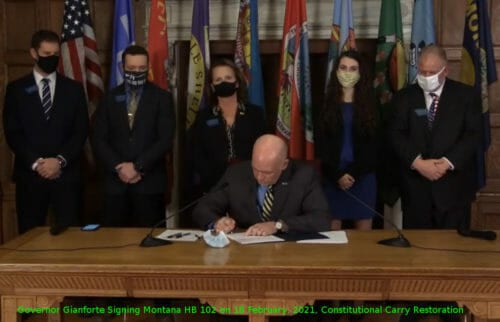 U.S.A. –-(AmmoLand.com)- On 18 February 2021, Governor Greg Gianforte signed Montana HB102 into law. The bill is the largest, most comprehensive reform of Montana gun laws in the history of the state. A previous AmmoLand article discussed the details of the law.

Many of the reforms in the law have been sought for decades, but have been thwarted by Montana Governors. Democrat Governors vetoed Constitutional Carry bills three times in the last 15 years.

In 2021, Governor Gianforte said he was looking forward to signing  HB102 on February 4th, in an interview on KGVO.com:

“There are a number of pieces of legislation moving through the Montana legislature,” said Gianforte. “I’m looking forward to getting them on my desk. One of those bills is HB 102, which would provide for constitutional carry here in the state. I’m looking forward to signing that bill, and if there are attempts to infringe on our state’s rights as it relates to our constitutional rights, know that I will work side by side with our Attorney General to oppose any of those efforts.”

HB102 passed the legislature on the 9th of February and was sent to Governor Gianforte on 11 February. A week later, on 18 February, the bill was signed in a video-recorded ceremony.

When a governor publicly signs a right to keep and bear arms bill, it indicates they actually support it, rather than are ashamed of it.

Montana becomes the 18th State to restore Constitutional Carry. Constitutional Carry is a reasonable approximation of a return to the state of law when the Second Amendment was ratified in 1791. At that time, no permits were required to carry arms either openly or concealed.

The carry of arms was essentially unregulated in the first thirty years of the new republic. Early gun laws were designed to prevent slaves from carrying arms without their owners’ permission.

The regulation of concealed carry by states gained ground after the Supreme Court ruled the bill of rights did not apply to the States in 1833.

A study published in the Journal of American College of Surgeons showed no effect on violent crime rates over the 30 years previous to 2019, as nearly all states removed significant restrictions on the legal carry of firearms. From the abstract:

During the study period, all states moved to adopt some form of concealed-carry legislation, with a trend toward less restrictive legislation. After adjusting for state and year, there was no significant association between shifts from restrictive to nonrestrictive carry legislation on violent crime and public health indicators. Adjusting further for poverty and unemployment did not significantly influence the results.

This study demonstrated no statistically significant association between the liberalization of state level firearm carry legislation over the last 30 years and the rates of homicides or other violent crime. Policy efforts aimed at injury prevention and the reduction of firearm-related violence should likely investigate other targets for potential intervention.