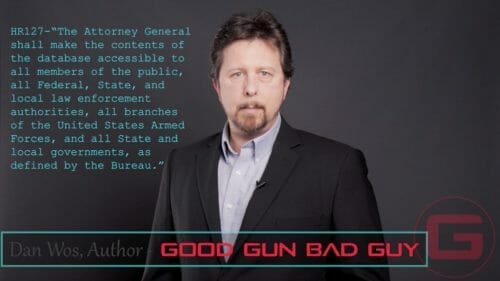 USA – -(AmmoLand.com)- HR 127 is an anti-gun bill that was introduced to the house committee and sponsored by Democrat Sheila Jackson Lee.

The bill has many concerning things in it but most importantly is the intent behind the bill. The bill includes age requirements, storage requirements, and a national firearms and ammunition database through the ATF. The database would be accessible by every person in the United States. The bill states:

“The Attorney General shall make the contents of the database accessible to all members of the public, all Federal, State, and local law enforcement authorities, all branches of the United States Armed Forces, and all State and local governments, as defined by the Bureau.”

Why would Democrats want your neighbors, co-workers, and social media contacts to know where your guns are located? Anti-gunners have always liked the idea of turning in their fellow gun-owning citizens. We saw this early on with SWATting. SWATing was a strategy used to turn in gun-owners on false claims of serious gun-related incidents, often resulting in the death of innocent, unsuspecting people. SWATting evolved into the red flag law, where states encouraged people to anonymously turn in fellow citizens who owned guns under nothing more than an accusation that they could be a danger to themselves or society. The red flag law is a violation of due process rights because guns can be confiscated without a hearing. Now, Democrats in Congress want to make it even easier by letting the angry, irrational, anti-gun crowd know exactly who owns guns and the home addresses where they can be located.

The bill also includes another attempt at banning commonly owned semi-automatic rifles, magazine capacity restrictions and the requirement of a psychological evaluation of the gun-owner and “other members of the household” before the government will allow you to exercise your God-given right. Along with the mandatory psychological evaluation, at least two or more family members or associates including spouses and “former spouses” would be interviewed on behalf of the gun owner.

The fines and penalties for violating some of these restrictions would be anywhere between fifty to a hundred thousand dollars and ten to twenty years in prison or both.

So why are Democrats so intent on violating the rights of their fellow citizens? Could it be, they understand their policies and ideology go against the will of the vast majority of Americans? Do Democrats understand that real Americans don’t want socialism in their country? Are Democrats afraid that they’re about to get a major political push back? Are they concerned that if they don’t gain legislative leverage over American citizens now, they may get voted out of office forever?

Democrats made a big mistake when they allowed radical AOC and the like to publicly voice their intentions of implementing socialism in America. They had been working very hard, up to that point, to keep it quiet while trying to eliminate the Second Amendment under the guise of public safety. They know the vast majority of Americans do not want the policies they’re pushing, but by the time Democrats publicly embraced the radical, Marxist ideology, they realized that they had made one big mistake. They were supposed to get the guns first. Now they’re up against a wall. They’ve made their intentions known. They’ve already started pushing socialism in a free country and on people who want nothing to do with it but unlike other countries, American citizens still own guns. More guns than people. At this point, they are desperate to pass gun-restrictions because they’re scared to death of an American uprising.

Stand strong America, there is an evil in our government, the likes of which we’ve never seen before. the 2nd Amendment is not a privilege. It’s your right. Never give it up because it’s the only thing that ensures our freedom and Democrats hate that.