Judi Wells This Week on Riding Shotgun With Charlie #93 ~ VIDEO 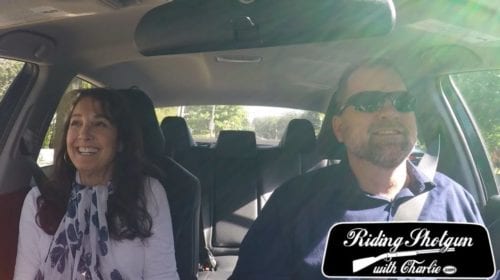 U.S.A. -(AmmoLand.com)- Judi Wells is more than just an “accidental activist”.  She’s an unexpected gun owner, too. She’s a vegetarian, does yoga, and doesn’t like killing spiders, let alone other animals. Go down the checklist of everything you’d expect as an anti-gunner and that’s her, too. Growing up in Canada and California, no one in her family liked shooting or went hunting. They hated guns.

Four years ago, it was her husband’s “bucket list” that changed everything. He wanted to buy a gun in California and she took lessons with him. During these lessons, Judi cried at the thought of holding and using a gun. She thought the gun was going to jump out of the safe and shoot her, but it didn’t.  When she learned about the Winchester Marksman Program through the National Rifle Association, changed everything for her. The WMP challenged her and she knew she wouldn’t just be throwing ammo downrange. She would be working on marksmanship and she had a goal to get better at shooting.

She’s done a 180-degree change on the ‘gun issue’.  She’s started a group of similar and retired women to go shooting.  She still has, to this day, friends who don’t know she’s into shooting & she’s lost some friends, too!  Then she learned about A Girl & A Gun and merged with them.

At a National Shooting Sports Foundation (NSSF) Fantasy Camp did some training with several professional shooters including Dianna Muller.  A couple years later,  Judi & Dianna were on a squad for a 3-gun competition and Di asked her about being the California rep for the DC Project. That’s how much she’s changed. She’s now educating politicians about how gun rights are women’s rights.

One of the things I really liked is that with her background in yoga, she’s able to make parallels between shooting and yoga.  She teaches both shooters and yoga practitioners about breathing, slowing down, and focusing on your body. It’s certainly a benefit of both activities.

We spend some time talking about getting a license in California, some things about concerns with the women in her AGAG chapter, and their very busy schedule. Judi’s group has 70+ women from all walks of life and all ages, from a famous female athlete to a mom who makes soap for the family business. Please check the link below for their schedule if you’re in the San Diego area.

While we were driving, we wanted to drive by the Lincoln Memorial but ended up driving by Arlington National Cemetery. Next to Arlington, is the Iwo Jima Memorial where we grabbed a couple of selfies.  We also got caught by someone for parking in a non-parking area. (You can see that on the RSWC Facebook page.)
Since we filmed this episode, Judi and Tatiana Whitlock joined forces and they host Responsibly Armed Radio.

It’s really wonderful to see that someone can get into shooting sports even though they’ve been against gun ownership their entire lives. Please share this with someone who isn’t into firearms and maybe they, too, can make a change.  Let’s face it, shooting a .22 is a gateway drug to freedom.

Favorite Quotes:
“By my 4th lesson, my instructor brought out something called the the Winchester qualification”
“Once you get into the gun world, so much more information comes to you.”
“We’re here to educate and talk to our legislators about our Second Amendment Rights.”
“I want my congressmen to know, and my senator to know, what is going on in California and what the face of a normal gun owner looks like.”

The post Judi Wells This Week on Riding Shotgun With Charlie #93 ~ VIDEO appeared first on AmmoLand.com.