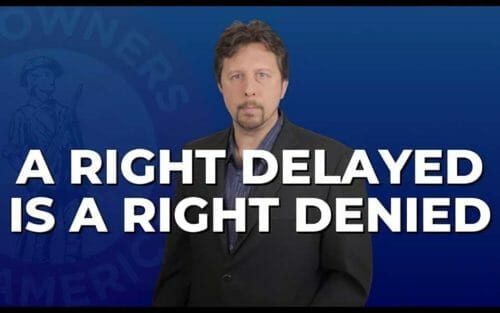 USA – -(AmmoLand.com)- Gun restrictions give killers the upper hand. Background check waiting periods keep good people unarmed for extended periods of time. So, while the anti-gun crowd is pushing for universal background checks and a lengthy and expensive licensing process, (that the bad guys will pay no attention to) good people are left defenseless because they’re subjected to unnecessary costs, waiting periods, and often avoidable delays.

Pamela Smith and Melissa Roberts from Kentucky are two examples of women who were able to defend themselves and save their own lives with a firearm. Carol Bowne was not so lucky. The State of New Jersey denied Carol the right to save her own life by implementing unnecessary waiting periods for her handgun purchase.

43 days after Carol applied for her handgun permit in her home state of New Jersey, she was stabbed to death by the very man she feared. New Jersey legislators decided that Carol should wait an extended period of time before being able to defend herself, even though she had previously reported her killer to police and even obtained a restraining order against him. Carol Bowne didn’t want to be a victim, and she did everything she could within the law to protect herself. But the State of New Jersey decided that they knew better.

The motivation behind these dangerous gun laws is often an irrational fear of guns, perpetuated by an anti-gun media, but most often, gun restrictions are politically driven. Universal background checks and extended waiting periods for firearm purchases are a perfect example.

According to the FBI, in 2019, an estimated 1,203,808 violent crimes occurred nationwide in America. With just over 320,00,000 people in America, we are each left with about a 1 in 300 chance of being the victim of a violent attack. Because of those odds, many have decided to defend their lives and the lives of loved ones with a firearm. There were over 8 million new gun owners in 2020. Many of the first-time gun owners were encouraged to become gun-owners, by the violent left-wing riots that continued throughout the summer.

Of the 2.5 million yearly defensive gun uses (DGUs) in America, 46% are by women. It’s obvious that the trend is moving toward gun ownership, but Democrats in Albany, New York are trying to stop that trend. Amy Paulin, a New York State Assemblywoman, has decided she would like to prevent New Yorkers from being able to purchase a firearm, despite the number of lives saved by possessing them. She has proposed a 10-day waiting period to purchase a gun and has drafted a bill to make sure that you and your family remain unarmed, defenseless, and dependent on local authorities for as long as possible. I thought we wanted to empower women. The gun-grabbers seem to want to make them helpless by the gun-laws they propose. Albany Legislators believe that they know best when it comes to firearm ownership, so they have drafted Assembly Bill A00449 as a way of undermining your 2nd Amendment right.

Amy Paulin’s Assembly Bill A00449 would make sure that violent attackers would be safe from people defending themselves. Should this bill become law, it is sure to embolden criminals by limit-ing their risk when confronting their victims.

Assembly Bill A00449 is described as:

The intended purpose of the bill is not explained. If it were, its results could be measured should it become law.

In the left-wing fantasy world, bad guys are victims of society and lawful American citizens are to be condemned. This dangerous Democrat bill would allow criminals to rule the streets, putting good people in a defenseless position. Albany Democrats show no shame in making New York more dangerous in pursuit of their anti-gun political agenda. Our founding fathers knew that people like this would maneuver their way into our government. That’s why the 2nd Amendment was written.