Hypocritical Giffords ‘Only One’ Throwing Stones from Glass House 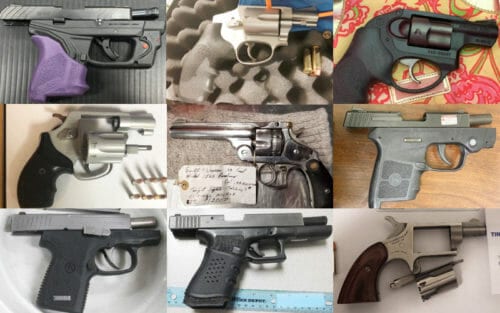 “As for the per-passenger upswing in guns found last year, it’s entirely plausible that it was tied to a massive increase in gun sales in 2020,” the Sun piece notes. “The spike, which was attributed to fears related to the coronavirus pandemic and Black Lives Matter protests, pushed the overall number of civilian-owned guns in the U.S. to nearly 400 million, according to one widely cited estimate.”

So far, no one has relayed any information that’s not supportable. And I’ll stipulate upfront, regardless of how some of us feel about TSA and mandated disarmament, that any gun owner who forgets that he is armed is being inexcusably negligent.

Confining the repercussions to them is not good enough for the gun-grabbers, who, having set up the argument by observing a problem and giving people a scare, then proceed to exploit it and swindle those people out of their rights.

“And keep in mind, these numbers didn’t include weapons packed properly in checked luggage,” the Sun hit piece continues. “Under federal law, guns can be placed in checked bags as long as they’re unloaded and placed in hard-sided cases…”

You get the feeling they’re against that, too? Oh, they’re against plenty more, and to help set the rubes up for the pitch, they bring in an “expert” who can wow the crowd with his credentials, former ATF special agent, and now special spokes-flack for the Giffords Gun-Grab Group, David Chipman.

AmmoLand readers may remember him. He’s the sleight of mind artist who says AR-15s should be regulated like machineguns, claiming them to be “weapon[s] of war, the same gun that was issued to me as a member of [the] ATF SWAT team.” And that con, of course, was devised years ago by Josh Sugarmann of the Violence Policy Center, who explained:

“The weapons’ menacing looks, coupled with the public’s confusion over fully automatic machine guns versus semi-automatic assault weapons—anything that looks like a machine gun is assumed to be a machine gun—can only increase the chance of public support for restrictions on these weapons.”

Having proven that he can say just about any damn thing they want and the DSM (Duranty/Streicher Media), incompetent or deliberately deceptive, or both, will have his back, Chipman offers another meme that sounds good to the fearful and the ignorant:

“There are probably a small percentage of people who carry and are trained, like we expect from law enforcement or military. The rest are untrained or irresponsible.”

You know, government enforcers are the “Only Ones” who can be trusted with guns. Remember the parable about the mote and the beam?

Remember how Chipman’s assertion worked out for DEA agent Lee Paige, who made the claim that he was “the only one professional enough” to carry a gun in front of a room full of schoolchildren and then proceeded to shoot himself in the leg?

Without setting out to, I’ve compiled quite the “Only Ones” archive over at my The War on Guns blog, and there’s also a growing one here at AmmoLand.  My purpose has never been to bash cops. I do it to amass a credible body of anecdotal evidence to present when those who would deny our right to keep and bear arms use the argument that only government enforcers are professional and trained enough to do so safely and responsibly. I also do it to illustrate when those of official status, rank, or privilege, both in law enforcement and in some other government position, get special breaks not available to we commoners, particularly (but not exclusively), and especially to expose law-breaking and corruption.

Since the topic the Sun introduces here is gun owners forgetting they have guns, let’s take a look at how much more superior Chipman’s “trained” and “responsible” professionals have proven themselves to be. Years ago I examined the ridiculousness of that contention by recalling some disturbingly common reports of officers leaving their sidearms in public restroom stalls (archived link may load slowly).

We also can’t overlook incidents of guns stolen from police vehicles, and reports of guns missing from police and federal agencies. Take, for instance, Chipman’s ATF, where lost and/or stolen agency guns have later been used in crimes. And don’t get me started on the guns they deliberately let “walk” to Mexico.

It’s hardly surprising that Chipman, a careerist with his snout in the disarmament trough, would want to point fingers at everybody else, and it’s hardly surprising that the Sun would help advance that agenda. They segued seamlessly from airline passengers forgetting the contents of their carry-ons into an attack on permitless carry, and a call for registration-enabling “background checks,” due process-denying “red flag laws,” and more. After all, there’s a well-financed elitist push for more Nevada disarmament edicts, and the media has always been more than happy to parrot narrative talking points on cue.

The airline angle being used here reminds me of a post I did years ago that illustrates how much we’ve lost from the way things used to be, or more accurately, how much we’ve allowed to be taken from us, which is never enough. Because it’s buried on my blog, I’m going to steal from myself and repost much of it here:

Turner Classic Movies has been playing a resurrected John Wayne film, just recently released to DVD and apparently seen on TV for the first time: The High and the Mighty.

I enjoyed it–from the soapy melodramas among the passengers to scenes that were obvious sources for the “Airplane” parodies, right down to Robert Stack thanking John Wayne for slapping him when he lost his cool: “I needed that.”

I half expected to see Lloyd Bridges declaring it a bad week to give up sniffing glue, or Stack warning “That’s just what they’ll be expecting!” when the control tower ordered the runway lights turned on.

But what really struck me were the assumptions of the time: A stewardess (before the pc days of “flight attendant”) lighting a passenger’s cigarette–indeed, the pilots smoking in the cockpit. Not that I miss that, but you know what?–that choice ought to be determined by the market rather than dictated by the fedgov.

And then there was the handgun–carried by a passenger who was stalking a man he believed to be his wife’s lover. He carried it right in his coat pocket.

He got on a plane without going through metal detectors. TSA didn’t grope him or wand him down or make him take off his shoes. The other passengers took it away from him. One kept it in his pocket for safekeeping, and gave it back when the guy promised to be good! And because there was no harm/no foul, no SWAT team was waiting to take the guy out when he got off the plane–he disembarked down the stairs and walked across the tarmac to the terminal. In San Francisco!

I was two years old when this movie came out. I see the changes in assumptions that have happened in my lifetime and wonder what assumptions will change when my sons are my age.

If the self-anointed high and mighty represented by hirelings like Chipman have their way, those changes will be total.

The post Hypocritical Giffords ‘Only One’ Throwing Stones from Glass House appeared first on AmmoLand.com.