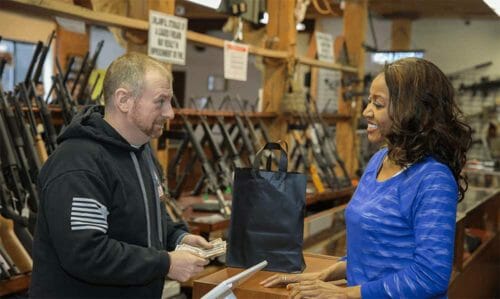 According to data from the National Instant Criminal Background Check System (NICS), 21 million background checks related to the sale of a firearm were conducted in 2020—a 60 percent increase over the previous year.

“NSSF estimates that 40 percent of those gun sales were for first-time gun buyers, totaling 8.4 million new gun owners in the United States in 2020,” said Joe Bartozzi, NSSF President and CEO. “That kind of growth validates the relevance and importance of the Second Amendment but also speaks to an increasing need for firearm safety education. As a community of firearm owners, we all have a responsibility to use, transport, and store firearms safely, and NSSF is committed to getting this information in the hands of all our newest community members.”

Firearm ownership is also increasingly diverse as sales among women accounted for 40 percent of all sales, and purchases by African Americans increased by 56 percent compared to 2019.

“We’ve seen a trend of more African Americans choosing to express their Second Amendment rights to own a firearm, especially for personal protection,” said Philip Smith, President, and founder of NAAGA. “Purchasing a firearm is one step to protecting your family, but it also means safely storing your gun away from children, so they don’t hurt themselves.”

Programs like NSSF’s Project ChildSafe are addressing this growing demand for firearm safety education by providing gun owners with the resources needed to keep safe storage practices top of mind and to help teach this information. These include:

“As parents, we all have ‘the talk’ with our kids about things like drugs, sex, and making good decisions,” Smith says. “Talking about gun safety and responsibility is just as important, even if you don’t own a gun.”