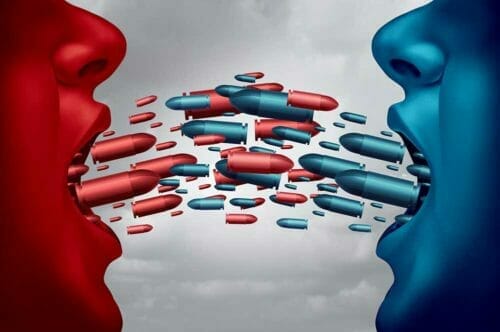 USA – -(AmmoLand.com)- It’s been three solid months since the election and most of us in the “gun-rights community” or “gun-rights activist community” have moved on to prepping for the fight ahead as a result of the outcome of said election.

Trust me when I tell you, that fight is coming.

How do I know? I know because I take them at their word when the Democrats and Joe Biden tell us what they want to do. I know the Democrat party is the party of gun control. It always has been and always will be. Don’t want to believe me? Here’s a taste of that gun-grabber wish list in their 2020 platform from page 47 and 48 as a reminder to those who think Biden is “no more of a threat than Trump was”:

“Democrats will ban the manufacture and sale of assault weapons and high capacity magazines. We will incentivize states to enact licensing requirements for owning firearms and extreme risk protection order laws that allow courts to temporarily remove guns from the possession of those who are a danger to themselves or others.” Page 48, 2020 Democrat Party Platform

Not enough for you? How about this from the Biden campaign website? Maybe this will convince you:

There’s much more where that came from in the Biden plan but this gives you an idea and a reminder that yes, it’s the Democrat Party that is the party of gun control.

My vote in 2016 and 2020 as the host of Armed American Radio and AAR Daily Defense national radio broadcasts was a vote against the Democrat hatred of my gun rights and I will never apologize for that vote. That holds true for every previous election.

Politics, and voting, in particular, is a choice between candidates and I was given a choice. (I will not get caught up in the tommyrot suggesting that Donald Trump wasn’t pro-gun enough. To even suggest Donald Trump posed a similar threat to the future of our gun rights as this current group of Swallwell, Biden, O’Rourke, Harris, Schumer, Durbin, et.al. now in control of the government, is a twisted joke, and frankly makes those who argue such appear foolish and disingenuous). Here’s a 2024 teaser, I will vote for the same choice in the next election. My guns!

Hint. I won’t be voting for a Democrat, because, (wash, rinse and repeat), it’s the Democrat Party that hates my guns. Got it? A vote for Democrats is a vote against gun rights, period. There is no gray area and frankly, I’m getting sick of the psycho-babble suggesting otherwise. This is about ideas, platforms, and agendas, not individuals. There are two major political parties in this nation and that isn’t going to change for the foreseeable future. Deal with it.

One runs on a pro-gun platform, the other an anti-gun platform. I don’t have time for, nor do I care to engage in some nonsense pseudo-intellectual blather about ending the two party system, changing the “duopoly” gibberish, etc. I’ll leave that up to the internet basement dwellers with too much time on their hands and a Unicorn in their bedroom closet. In the meantime in Realtyville, I’ll continue fighting, in my own way, on my own platforms, for gun rights, and today that means fighting the Democrats and their anti-gun agenda.

You ignore them at your own risk. I won’t. Here’s how it is, not the way I want to see it, but here’s the way it is: Biden is your president whether you like it or not and along with that fact comes page 47 and 48 of that Democrat Platform and the “Biden Plan to End Gun Violence” as outlined on his campaign website and his own words (see above). I choose to take them at their word. They want our guns, we’ve known it for decades, they’re playing the long game, they have control of the federal government, they are more well-funded than ever before, the legacy, establishment media is in their hip-pocket and we have one hell of a fight on our hands. Like it or not.

The question becomes, how do we deal with this all-hands-on-deck effort to gut the Second Amendment?

To answer that requires us to define who we are or at least get a somewhat clearer picture. I hear a lot of talk about “gun culture,” the “gun community,” and the words I used above, the “gun-rights community,” or “gun-rights-activist.” I also hear a lot of chatter about how we as a “community” need to “open our arms” to the millions of new gun owners. New gun owners in large part created from the threat a Biden administration poses to our gun rights and the violent and ongoing rioting that left a wake of destruction in many Democrat-controlled cities over the summer of 2020. (The riots that the legacy establishment media seems to have forgotten. Yeah, those riots.)

So what or who exactly is the “gun community” and is every gun owner in America a part of the “gun community?” I believe, for the most part, when folks hear the term “gun community,” they believe it to be encompassing the three terms mentioned above, community, culture, and activists. I disagree. They are, in my estimation, mutually exclusive of one another.

For example, I live in a nice community. A neighborhood if you will made up of diverse families of every color, creed, religion, similar economic backgrounds, but all with different beliefs and lifestyles, tied together by the fact that we share the same community. Some are Democrats, Republicans, Independents, some gun owners, others not, yet we’re all part of the same “community.” I would argue that the word community in this sense is very broad and may be all-encompassing. I could easily argue that any gun owner is a part of, or at the very least could be considered part of the gun community in that respect just as any neighbor that lives in my neighborhood is a part of my community.

Being a part of the gun “culture,” on the other hand is more focused. To be a part of the gun “culture”, one would have to be, in my estimation, not only a gun owner but someone more active in the gun “community.” The family that shoots clays on weekends, hunts, trains regularly (when ammo is available), carries a CCW, and more or less actually lives what I refer to as an armed lifestyle. Like those in the “gun community,” this is also a very diverse group made up of all walks of life, economic backgrounds, political beliefs, lifestyles, religions, etc.

Now we get to gun “Activists.” This is laser-focused. Drilled down to the core. This group of gun owners is the ones on the front-lines. Me. More than likely if you’re reading this, you. Not everyone is a part of this group. Many might like to believe they are activists simply because they own guns and believe in the right to bear arms but this group goes a step further. This group not only attends the rallies but helps plan them. This group attends lobby days, writes letters to the editors when they see their rights being attacked by gun prohibitionists, engages the “community” on behalf of the right to bear arms, donates hard-earned money to the groups that fight the gun-grabbers, and essentially becomes a part of the movement that fights against gun-grabbers and the political party that wants to deny us our rights. (Democrats)

This group is not made up of everyone who simply owns a gun and likes their guns. No way. This group has earned the right to call themselves activists by putting it on the line, every day. This group would never, and I mean never consider pulling the lever for any candidate representing any party that mentions the platforms quoted in this column. Never!

Now comes the part where panties get wadded. Hear me loud and clear. I’ve stated this on-air for years. There are many members of the gun “community” or gun “culture” who vote for gun-grabbing politicians. These gun owners are NOT and never will be “activists” and do not deserve to wear the label. They haven’t earned it. In my estimation, if you run your mouth about your gun rights being just as important to you as they are to me, for example, then pull the lever for the party that has stated intentions of infringing on those rights, you’re nothing more than a Democrat that likes guns. And that’s OK, just own it. You may (or may not) be fixable but you certainly haven’t arrived yet. You have other issues that are more important to you than our gun rights. When the chips come down, you’ll likely be willing to accept infringements that all of us will fight against.

The activist, on the other hand, is hardcore, single-issue and works their ass off to fight for their rights. That does NOT include voting for avowed gun-grabbers. Ever.

You gun owners that pull the lever for the folks we fight against at great monetary expense, time, and effort every single day, year after year, have not earned entrance into the club. I’m glad you’re a gun owner, yay for you. Now enjoy your guns, be responsible, get training and enjoy your freedoms, we’ll help you because that’s who we are, enjoy being American and I’m glad you have other issues that are more important to you than your guns. That’s your right as an American, but know this: While you enjoy your right to bear arms and protecting your family with the guns of your choice, a great many of us out here will be ferociously fighting against those gun-grabbers you voted for and not just on our behalf, but yours also.

Must be nice being that gun owner that gets the free pass of gun ownership while bearing none of the burden or responsibility of fighting for the right to do so. Spare me your excuse of working to “change your party from within.” As long as you’re voting for the enemies of our right to keep and bear arms at the booth, we’re not friends simply because we’re both gun owners. You may as well ride that Unicorn to your next range session.

No worries, we’ll have your back. We always do. And a reminder: When the Biden/Harris gun control agenda begins moving through the halls of congress or flowing from the ink pen of “sniffy” Joe Biden, or AG’s or cabinet members, or health officials, I will be here and on-air ready to remind you loud and clear who is responsible.

Yes, the truth is a harsh mistress.

The post Being Part of the Gun Community or Culture Does NOT Make You a Gun Activist ~ VIDEO appeared first on AmmoLand.com.