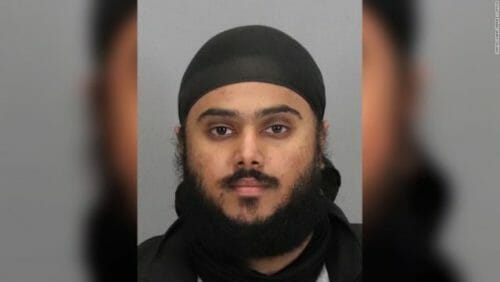 U.S.A. – -(Ammoland.com)- “A northern California sheriff’s deputy was ‘lucky’ to survive a gunshot to the chest after his body camera helped to block the bullet an unknown suspect fired during an ‘ambush’ attack near a reservoir,” Fox News and other news outlets reported a year ago.

“Anyone of those rounds could have hit him anywhere,” Santa Clara County Sheriff Laurie Smith said at the time. “He was very brave under fire.”

Except it’s now alleged the whole story was “fake news” based on a lie made up by the deputy.

“Sukhdeep Gill, a 27-year-old deputy with the Santa Clara County Sheriff’s Office in California, has been charged for allegedly filing a false police report about being ambushed by a drive-by shooter,” Newsweek and other news outlets report. “He was placed on administrative leave as investigators looked into his story. He has since been charged with felony vandalism and a misdemeanor charge of filing a false police report [and] placed in San Jose’s Main Jail.”

If anyone is surprised by pervasive indicators of blatant corruption in the Santa Clara County Sheriff’s Department, they shouldn’t be. Evidence suggests it starts at the top, with Sheriff Laurie Smith and her underlings the subjects of an ongoing probe into the awarding of “may issue” concealed gun carry permits in exchange for political campaign contributions and other considerations by well-connected elites seeking special “privileges and immunities.” Meanwhile, ordinary citizens risk being arrested by Smith’s enforcers for daring to exercise their rights without her permission.

This goes to the heart of “the right of the people to keep and bear arms,” the one with the mandate that it “shall not be infringed.” What level of corruption can we not expect from liars who swore an oath to uphold and defend the Constitution and then set themselves up as the “Only Ones” who can be trusted with guns, ready to obey unlawful orders (the Constitution being the “supreme Law of the Land”) and confiscate yours?

The question really is: Why wouldn’t deputy Gill think corruption is systemic, lies are rewarded, and the only rule not to break is to not get caught?

There’s another elephant in the room, one that the prevailing cancel culture will intimidate some from commenting on, but that nonetheless raises a point we must not be afraid to bring up: Some will note the deputy’s name and that he is a Sikh, and if they mention it they’ll be condemned and “canceled” as racists, white supremacists, extremists, Nazis, and worse.

That’s hypocritical, because it’s a human reaction, not limited — I guess if you listen to Democrats — to “Republicans.” Tell me someone considered by all to be of “traditional” American heritage, a white Christian with a “European”-origin surname, working as a cop in India, wouldn’t be the subject of much speculation and tell me people in the land of caste discrimination don’t have plenty of “tolerance” issues of their own. Not that we’re likely to ever hear of such a thing, because the flow between continents is pretty much one-way.

Curious, how many people from around the world are literally dying to come to a land that “progressives” insist is dominated by “haters.” It’s also curious how many foreign nationals come to this country, become citizens, and then vote Democrat and seek to impose more disarmament laws. Why does anyone think Joe Biden is turning the “pathway to citizenship” into a superhighway?

Resistance to and resentment of that is hardly bigotry or xenophobia. Rather, it is a reasonable expectation that all immigration laws enacted should uphold the principles of the Preamble to the Constitution, that is, that they will help, among other stated purposes, “to secure the Blessings of Liberty to ourselves and our Posterity.” At a minimum, foreign nationals welcomed into this country should understand and support its founding principles and the Bill of Rights. It makes no sense to open the doors to those whose beliefs are antithetical to those values, unless, of course, your purpose is to undermine and replace them.

And it’s not us imposing concealed permit-issuing policies that favor elites and discriminate against minorities.

It’s relevant to wonder about Mr. Gill. That said, we must also acknowledge there is no indication that he is not a citizen. I bring up the subject of assumptions to illustrate a pretty common trait of reacting differently to the familiar and the unfamiliar that is shared by people around the world. I mention it because — get real — would anyone feigning offense care to bet his defense will not exploit “systemic racism” as a motivating mitigator for his alleged inexcusable actions?

I also bring it up because many don’t realize Santa Clara County Sheriff’s deputies don’t need to be citizens to have the power to arrest those who are. A cadet, empowered under supervision to “apprehend law violators” can be a “permanent resident alien who is eligible for and has applied for citizenship.” Ditto for reserve deputies. In other words, foreign nationals are authorized to enforce disarmament edicts against American citizens on U.S. soil.

It’s fair to wonder how, before taking the oath of citizenship, they can legitimately take California’s required oath to qualify for employment as an officer. It’s also fair to ask if we can import disarmers, who needs UN blue helmets?

It’s a trend more police chiefs are trying to accelerate:

Why would we expect that those who see their function as law enforcers rather than rights defenders would balk at setting the new Hessian mercenaries against upstart citizens?