Right to Arms Amendment will be on Iowa Ballot in 2022 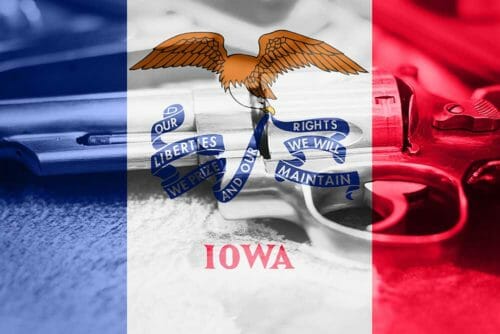 U.S.A. –-(AmmoLand.com)- Barring further misadventure, the Iowa Right to Keep and Bear Arms (RKBA) constitutional amendment will be presented to Iowa voters in the general election scheduled for 8 November 2022.

The amendment passed the Iowa Senate 29-18. It passed the House 58 to 41. The votes were on strict party lines.

The Senate approved the resolution Thursday afternoon in a 29-18 vote along party lines after about two hours of debate. Hours later, the House voted 58-41, also along party lines, to pass the same measure. Both chambers are controlled by Republicans. Every Republican present voted in favor of the amendment, while every Democrat was opposed.

There were a few members which were not present for various reasons.

Here is the amendment. From iowa.gov:

Right to keep and bear arms.

Sec. 1A. The right of the people to keep and bear arms shall not be infringed. The sovereign state of Iowa affirms and recognizes this right to be a fundamental individual right. Any and all restrictions of this right shall be subject to strict scrutiny.

Both Democrats and Republicans were willing to pass a constitutional amendment. The Republicans insisted the amendment actually protect the RKBA, by including the provision for strict scrutiny.

Other states, such as Hawaii, have the same language as the US Constitution, but the amendment in Hawaii has not prevented severe infringements on the RKBA in Hawaii.

Hawaii requires registration of firearms, special permission to purchase firearms, and refuses to allow open carry of firearms or to issue concealed carry permits to virtually all members of the public.

The Democrats were perfectly willing to pass an RKBA amendment, as long as it had no serious effect.

Iowa is one of only six states which do not have an RKBA amendment in their state constitutions. The other five states are: California, Maryland, Minnesota, New Jersey, and New York.

Several other states have passed RKBA provisions since 1997.

Wisconsin Constitution’s Section 25, which protects the right to keep and bear arms, passed in 1998 with 74% of the vote.

Louisiana passed an amendment in 2012 with 74% of the vote

No RKBA amendment, which has been presented to the people on a referendum, has been defeated in an election.

The post Right to Arms Amendment will be on Iowa Ballot in 2022 appeared first on AmmoLand.com.