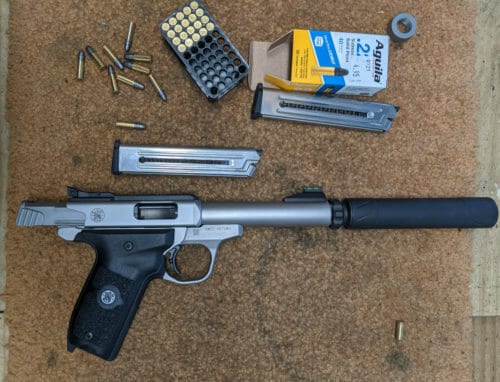 USA – -(Ammoland.com)- I put off buying a suppressor for a long time. They’re not cheap, Uncle Sam insists on taxation without justification, and then there’s the wait. In the spring of 2020, I decided that I had put it off long enough and bought my first suppressor. Actually, I bought three.

The three suppressors I went with were all from the BANISH line offered exclusively by Silencer Central. This review is of the BANISH 22 suppressor.

Made for Silencer Central by Mack Brothers, the BANISH 22 is made of titanium (hence the super lightweight specs), has eight baffles inside of it, uses a standard 1/2×28 thread pitch, is user-serviceable from both ends, and is even full-auto rated from .17HMR up to 5.7×28.

Some gun guys and gals won’t admit it, we can be kind of vain about our guns and gear. While function certainly outweighs form when it comes to a suppressor, it doesn’t hurt that I think the BANISH 22 is a good looking can.

I headed to the range with my BANISH 22, my Smith & Wesson SW22 Victory pistol, and a couple 50-round boxes of both super and subsonic .22LR rounds.

I was lucky enough to have the entire outdoor range to myself, so I was able to shoot the BANISH 22 the way I really wanted to: without any hearing protection.

Wow. I was not disappointed. I’ve shot suppressed before, but I’ve always had to wear some sort of ear pro even if it was just .22’s, so this was a real treat!

I started with the regular, supersonic rounds and the first thing I noticed was the sound. Not that of the suppressor, the gun cycling, or the “crack” – but of the rounds impacting the steel. I had never really, truly heard rounds hitting steel. The BANISH 22 brought the decibel level down to a point where that’s really the only sound that I noticed.

Then I switched over to the subsonic rounds, which is really what I wanted to check out. Yowza! Now this is what shooting suppressed is all about! Without the supersonic crack, shooting my pistol with this suppressor was, well, for lack of a better description, stupid quiet. I mean, this is about as close as you can get to “Hollywood quiet.”

Needless to say, it was an absolute blast. The gun, the ammo, and the suppressor all performed wonderfully together. I wish I had brought more ammo with me, but, well, we all know how that’s going right now.

Back at home, it was time to start cleaning. Everyone tells you how much fun it is to shoot suppressed. Almost no one tells you how much of a pain in the ass it is to clean both your gun and your suppressor – especially when you’re talking rimfire – when you don’t have an ultrasonic cleaner. So, I got to work with my solvents and an old toothbrush.

Carbon buildup is no joke, and even with the small amount of rounds I shot (approx. 100), my gun was filthy and the suppressor’s baffles were stuck. It took a good bit of work to get them out of the tube, but once I accomplished this, the baffles themselves weren’t that bad. Maybe I’ve just seen one too many rimfire suppressor baffle horror photos online?

A good scrubbing with the toothbrush and some Hoppe’s made quick work of the majority of the carbon. I let them sit with the solution for a bit and then gave them a final scrubbing and rinse under warm water in the kitchen sink.

Once dry, I put a light coat of oil on the baffles and lined them up for reinsertion into the tube. Unlike some suppressors where the baffles sort of clip together for indexing purposes, the ones on the BANISH 22 do not. Instead, they’ve got an indexing line engraved on the outside of them that you line up visually. It was a bit of a hassle keeping them lined up as well as I could while putting them back into the tube, but it wasn’t a huge issue.

If you’re in the market for a .22 suppressor, I’d definitely recommend looking at the BANISH 22. Plus, Silencer Central made the process super easy. I was able to break up the cost into four monthly payments while I waited for my paperwork to clear, and then once the ATF gave their blessing, the suppressor was sent to one of Silencer Central’s FFL in my home state, and then it was mailed right to my door. Payment, paperwork, fingerprints, trust setup, etc. was all done from my home office. Pretty convenient.