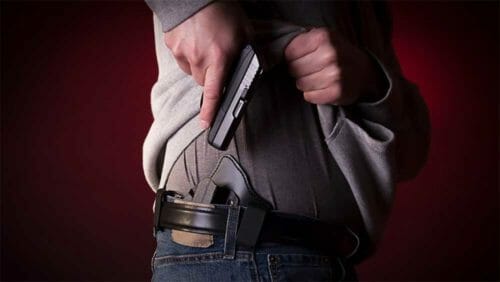 U.S.A. –-(AmmoLand.com)- We start with this news report from 10EBNS in Columbus, Ohio.

You left the market and are walking back to your car. It is dark outside. Two young men cross between the cars and move toward you. They shout at you. One of the men has his gun pointed. They want your money and your phone. Just that fast, you’re being robbed.

You have your Ohio concealed carry license. You own a gun. Fortunately, you are carrying tonight. The news story doesn’t say how, but you shoot the armed attacker who has his gun out. He shoots too. He is critically wounded. Fortunately, you are shaken, but unhurt. You and the other robber run away.

You call 911. Police arrive and take your attacker’s gun. EMTs transport him to the hospital. You give a brief statement to the police that includes a description of your other attacker. Police arrest the other attacker nearby.

Your first attacker dies in the hospital. Now, the second attacker is charged with murder. Your attackers were 17 and 18 years old.

Attacks like this happen every night. There is a lot we can learn and apply as we study this example of armed defense. Our defender did a number of things to save his life.

He had his permit so he could carry his concealed firearm in public. He dressed around the gun and was armed. He recognized a threat and defended himself. Witnesses say they heard three or four shots, but at least one of those shots was from the attacker. Despite being shot at, our good guy stopped shooting when the other attacker ran away. Our defender moved to safety and called 911. He returned to the scene in order to talk to the police. He gave a brief statement. When you read the linked news story and watch the on-scene video, it is clear that the defender did not talk to the news media.. and that is good too.

Getting that much right in so little time doesn’t happen by chance. The victim’s performance says the victim thought about his defense before it happened.

Now it is our turn to think about what might happen to us.

We can do better. Use a shopping cart so your hands are empty. If you can, have a flashlight in your hand at night and look around. Sure, the light will let you identify strangers, but a flashlight also makes you look different from the last victim these criminals robbed. With your hands-free, your head up, and your eyes open, you don’t look like prey! The bad guys move on to attack someone who looks like food. We win every fight we avoid.

Don’t be shy if someone comes up to you in a dark parking lot. Yell STOP while they are still 5 to 7 yards away. Yes, firearms instructors have their students practice yelling “STOP”. It feels silly, but it isn’t silly if it works.. and it does.

The bad guy fired his gun which brings up another important point. We don’t want to stand there and get shot. If we didn’t see the bad guys coming and the bad guy already has his gun out, then we want to create a distraction. That is really important because we don’t want to be involved in a gunfight where both sides press the trigger.

As a distraction, put your wallet in the shopping cart and push the cart away from you out into the street. Next, we want to move in the other direction. We’d like to move to the side and towards cover as we draw our handgun. If necessary, shoot your attacker until he stops being a threat. If he remains a threat, we can shoot the second attacker too until the second attacker runs away.. maybe.

It is important to articulate why each attacker was an immediate, lethal, and unavoidable threat. If the threat goes away or you can avoid the threat, then your firearm is the wrong solution.

As you’re running away, try to use a car as concealment. That means we’re crouched down behind the hood, the roof, or the trunk. Only the engine and some steel truck-wheels are solid enough to act as a cover and stop a bullet. Run to a safe place, and look around. Shout for help so everyone looks at you.

Shout, “HELP. CALL THE POLICE.” Shout it twice. Yep, we want to practice that too. When it is safe, then we holster our gun and we call 911.

Say, “I called you. I was attacked. I defended myself. The bad guys look like this.” Then say, “I’ll answer all your questions and file a complete report after I’ve spoken to my lawyer.” It is hard to shut up, but is important that we say little.

Here is why. You just defended yourself from a life-threatening attack. Even if you were not shot or hit, your brain is now suffering a chemical injury from adrenaline.

Think about it. You are as incapacitated as if you’d been hit on the head. Your ability to understand and answer questions is impaired. Your memory is faulty as you get things out of order. At the same time that we’re mentally impaired, everything we say will be compared to a perfect recording of the events in a court of law. Right now, you are in no condition to give an accurate statement.. so don’t.

Learn about this and more from your local firearms instructor and from a seminar on the legal use of lethal force. Until then, I want you to look and sound funny; practice making a distraction and shouting.