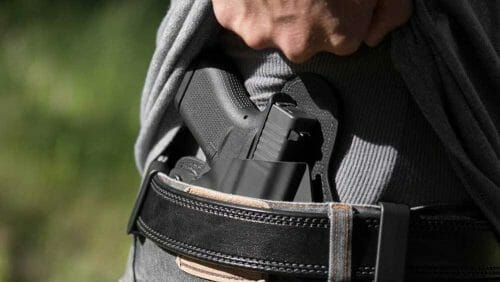 U.S.A. –-(AmmoLand.com)- Firearms Policy Coalition (FPC) and Firearms Policy Foundation (FPF) announced the filing of an amicus brief with the United States Supreme Court in the case of NYSRPA v. Corlett, a case involving the right to bear arms in public. The brief is available at FPCLegal.org.

New York State forbids ordinary law-abiding citizens to carry a firearm outside the home without a license. To acquire a licence, an applicant must demonstrate a “proper cause.” This requires more than just a desire to exercise the right protected by the Second Amendment. It requires more than a desire to protect one’s self or family, more than good moral character and the want to carry a weapon, and more than living or working in a high-crime area. Instead, “proper cause” requires an applicant to demonstrate “a special need for self-protection distinguishable from that of the general community or of persons engaged in the same profession.” So by its very definition, ordinary citizens are prohibited from exercising the right.

After the Second Circuit Court of Appeals upheld New York’s licensing scheme, the New York State Rifle and Pistol Association petitioned the Supreme Court to hear the case. FPC and FPF’s amicus brief supported the petition, which is the Court’s first opportunity to hear a carry case since Justice Barrett’s confirmation.

The brief was authored by FPC’s Director of Constitutional Studies, Joseph Greenlee. It is FPC’s second Supreme Court brief filed in the last week.

“By now, nearly every federal circuit court has addressed the right to bear arms in public,” said FPC’s Joseph Greenlee. “They have taken a variety of approaches in deciding the cases, and they have reached an even greater variety of outcomes. Currently, whether the right to bear arms exists, and what it protects, differs from state-to-state and sometimes even county-to-county. Constitutional rights should protect everyone equally, and we hope that the Court will use this opportunity to reinforce that.”

Firearms Policy Coalition (firearmspolicy.org) is a 501(c)4 nonprofit organization. FPC’s mission is to protect and defend constitutional rights—especially the right to keep and bear arms—advance individual liberty, and restore freedom through litigation and legal action, legislative and regulatory action, education, outreach, grassroots activism, and other programs. FPC Law is the nation’s largest public interest legal team focused on Second Amendment and adjacent fundamental rights including freedom of speech and due process, conducting litigation, research, scholarly publications, and amicus briefing, among other efforts.

Firearms Policy Foundation (www.firearmsfoundation.org) is a grassroots 501(c)3 nonprofit public benefit organization. FPF’s mission is to protect and defend the Constitution of the United States and the People’s rights, privileges, and immunities deeply rooted in this Nation’s history and tradition—especially the inalienable, fundamental, and individual right to keep and bear arms.

The post FPC and FPF Urge US Supreme Court to Restore the Right to Carry Arms appeared first on AmmoLand.com.