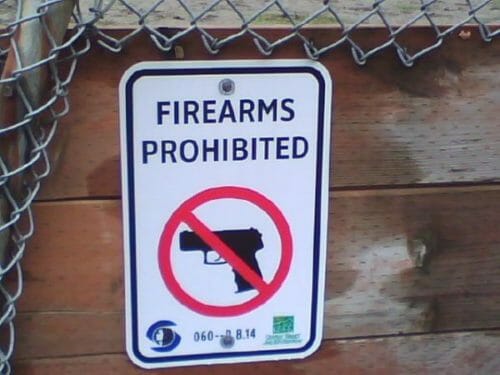 U.S.A. –-(AmmoLand.com)- Anti-gun lawmakers in at least three states are pushing legislation to undo state firearms preemption statutes in an effort to return to the days when gun owners could easily fall victim to legal rat traps by crossing an invisible line between two jurisdictions with gun laws that might conflict with one another.

Legislation has been introduced in Florida, Oregon, and Washington—all by Democrats—to repeal state preemption statutes that have been around for several years and have always worked.

The warning seems clear to gun owners in the rest of some 40 states with preemption laws: What is happening now in the Southeast and Pacific Northwest could be coming to your state.

Preemption statutes bring uniformity to state gun regulations, and perhaps that is why gun control zealots want to be rid of them. Confusing and contradictory gun laws almost amount to entrapment, according to some supporters of preemption laws, and that’s why many such laws were passed in the first place.

About 2,800 miles northwest, perennial anti-gun State Sen. Ginny Burdick, a Portland Democrat, has unveiled Senate Bill 535, which would undo the Beaver State law that has protected gun owners from Medford to Milton-Freewater.

North of the Columbia River, Seattle-area liberal Democrat Reps. David Hackney and Nicole Macri are behind House Bill 1313, which is not the first attempt to remove the Evergreen State’s 35-year-old model preemption law.

By contrast, the National Rifle Association notes at its website, “There are multiple arguments against local restrictions on basic firearm rights. Historically, some local jurisdictions have imposed clearly unconstitutional restrictions on gun ownership—the District of Columbia’s and Chicago’s since-overturned handgun bans being two recent examples. It also creates confusion when laws vary widely within a state, potentially placing otherwise law-abiding citizens at risk of violating an ordinance of which they were not previously aware, as they travel within their states, and more so when they travel outside their state of residence.”

The importance of state preemption statutes—which Everytown says exist in 42 states—cannot be overstated now that Joe Biden is in the White House. He made gun control a cornerstone of his campaign, and now the nation’s tens of millions of gun owners and the firearms industry are waiting for the worst. With Democrats in control on Capitol Hill, by admittedly thin margins, grassroots activists are being advised to stay focused and be ready to fight.

Over the years, state preemption laws have prevented anti-gun municipal governments from infringing on the rights of legally-armed citizens in Seattle and San Francisco. Presently, the NRA and Second Amendment Foundation are challenging a Seattle “safe storage” ordinance in state court on the grounds that it violates the state preemption law. About ten years ago, SAF and NRA, joined by the Citizens Committee for the Right to Keep and Bear Arms, and the Washington Arms Collectors took Seattle to court over an effort to ban firearms from city park facilities. That attempt also failed because of state preemption, and the city’s ultra-liberal city government hasn’t gotten over the defeat.

While the measures in Oregon and Florida are somewhat matter-of-fact, Washington’s Hackney and Macri open their legislation with a diatribe explanation of its necessity.

“The legislature finds,” their preamble declares, “that gun violence is a public health crisis in Washington state. For over 30 years, local towns, cities, and counties have been blocked from taking action on their own to prevent gun violence because of the statewide preemption of local regulations relating to firearms. The legislature intends to provide local jurisdictions the ability to build upon statewide standards and adopt responsible approaches to firearms regulations to help address the epidemic of firearm violence in their communities by restoring inherent local authority to adopt firearms regulations under the police power to protect public health, safety, and welfare.”

Washington has become something of a petri dish for anti-gunners wanting to experiment with various gun control proposals. Now, it appears, the gun control lobby and its state legislative allies are broadening their offensive.