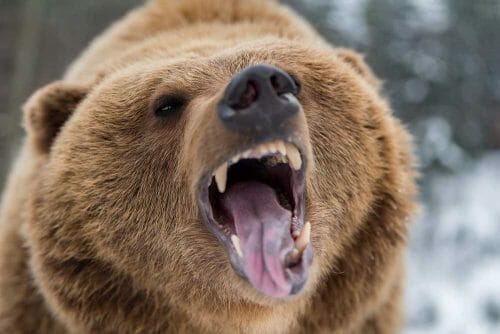 U.S.A. –-(AmmoLand.com)- Ken Ledeau is a semi-retired trucker who rented a cabin near Dupuyer, Montana. He loved the area, the views, and the wildlife he would see while walking for exercise. He would walk up and down a finger ridge on one side of Dupuyer Creek drainage. The land was mostly open on the ridge, while the creek had dense stands of willow trees and other vegetation.

Ken was 59 years old when the bear attacked him.

Neighbors in the Dupuyer area had warned him about the dangers of grizzly bears in the area. He had taken their advice and was carrying a Smith & Wesson 629 stainless steel .44 magnum revolver.  The revolver was loaded with 305 grain HSM cartridges. He had a can of bear spray.

On 8 April 2020, Ken was walking in the evening. It was cool and clear, in the low 40’s Fahrenheit.  Ken wore an old backpacking windbreaker over his holstered pistol, gloves, and carried a walking stick. His  629 Smith has a six-inch barrel and was carried in an Uncle Mike’s nylon belt holster with a thumb break retainer.

Ken hiked the ridge about a half-mile south of his rented cabin. He was returning down the ridge. Lower on the ridge, on the right, toward the Dupuyer drainage, there was a patch of snow and a brush patch.  As he passed the brush patch below him, he heard a noise.  He stopped and looked around, but did not see any animals.  He continued walking. For some reason, he looked back. A grizzly bear was emerging from the brush onto the snow and was charging up the slope toward him. The bear was 50-60 feet from him.

He yelled at the bear and threw his walking stick.  The bear was up on the ridge and coming at him in an instant.

He tried to get at the big Smith revolver. The windbreaker interfered with his draw. The bear closed very fast.  Time perception slowed, a common phenomenon in life and death situations, known as tachypsychia.

As the bear closed, in fractions of a second, Ken twisted and raised his left leg to protect his groin and femoral artery. The bear grabbed him by the thigh, a few inches above the knee, by the big muscles. The bear did not reach the bone. Ken said:

“When she bit me, it felt like a vise was closing on my leg.”

As the bear knocked him down and twisted him, he managed to free the revolver from the windbreaker, release the thumb break, and draw the revolver.

He could see the back of the bear, but not it’s head. He shot the bear in the back, into the shoulder/chest, with the muzzle of the revolver just inches from it.  Ken said, maybe he should have shot her in the head, but he did not want to shoot his own leg.

Ken says the first shot worked. It hurt the bear. The bear immediately let him go and retreated. As the bear turned and presented its side, he shot again at its chest. As the bear staggered away and paused, Ken emptied the revolver at it.

Then Ken attempted to reload with an HKS speed loader. The HKS is a handy way to carry spare ammunition. It seemed to take a long time to reload. He attributed the lack of speed to a lack of experience.

The bear staggered away. Ken finished reloading, assessed the damage, and limped back to his truck. He was able to drive to the hospital in Conrad. It took him four months to heal.

Before the attack Ken had fired his 629 Smith only once, to test it.

The Montana Fish Wildlife and Parks investigators told Ken he hit the bear four times out of six shots. One of the shots hit the bear in the eye socket and missed the brain. The bear was an adult female about 12 years old, weighing 350 – 400 lbs. Three cubs were later found and rescued by a rancher.

Ken has started to practice with his Smith & Wesson. He had a .357 and a .22 when he was younger. He says he is not an experienced pistol user.

Ken is considering a shoulder holster or a chest holster.  He has practiced drawing his revolver.

Ken said there had been nine bear attacks in Montana in 2020, as of the time of our conversation, late in the year. He says his experience and what he has observed in Dupuyer has changed his attitude about bears and how they affect the people living in areas where grizzly bears are expanding their range. He says many of those attacked were injured far worse than he was. The expense of recovery has been much higher for them.

He used to believe there should be more bears. Now he thinks the difficulties they present to people who are living where the bear population is increasing should be considered.