Minimal Barriers and Timing at the US Capitol, 6 January, 2021 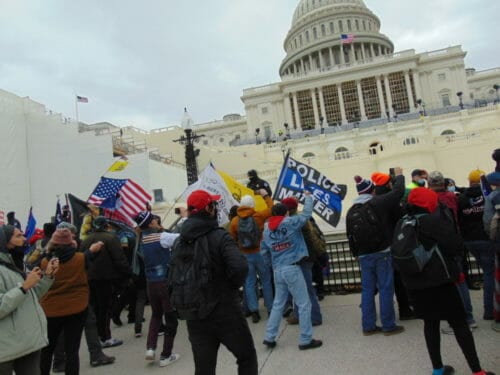 U.S.A. –-(AmmoLand.com)- The barriers put up to keep the crowds of protestors away from the Capitol building on 6 January 2021, were minimal and easily overcome. They were primarily psychological. An ordinary 10-year-old child could push their way through them, with minimal effort.

Physical barriers must be backed up by manpower if they are to be effective. This is especially true for such minimalist barriers as were placed between the massive crowds which came to the Capitol on 6 January 2021.

In the photograph, there are three widely spaced Capitol police officers in the broad grounds between the Ulysses S. Grant Memorial and the Capitol. The distance between the two is about 250 yards.

It is a significant distance. Being at the Ulysses S. Grant Memorial does not feel as if you are at the Capitol. You are hundreds of yards away from the Capitol building.

The first barrier encountered consisted of a line of the freestanding metal fencing pictured above. It is about three feet tall. Most of the individual sections were not connected with each other. A section can easily be lifted with one hand.

Another view of the Capitol from the West, before crowds of protestors, began to arrive. Notice the two Capitol Police on the grounds. The signs saying AREA CLOSED are attached to the second barrier encountered.

The second barrier consisted of green plastic mesh, attached to steel fence posts with what appeared to be plastic ties.

A few pounds of pressure on the mesh would detach the mesh from the posts and defeat the barrier. There were several of this plastic mesh on steel posts barriers. Once the inhibition of pushing them down was overcome, there were ineffective.

At 12:30, most of the protestors at the Capitol were on the east side. By 12:45, protestors coming down the mall and Pennsylvania avenue began to accumulate between the barriers and the Ulysses S. Grant Monument. The Monument had the steel stand-alone barriers surrounding it. The monument has a footprint of about 70 feet by 250 feet. Protestors jostled/moved the steel stand-alone fencing a foot or two, leaving gaps. This destroyed the psychological impact of this barrier. Protestors moved freely in and out of the Ulysses S. Grant Monument.

A significant psychological barrier had been breached. More and more protestors joined the people at the barriers. There seemed an inexhaustible supply of protestors coming from the Ellipse area, down the mall and Pennsylvania Avenue. Hundreds of thousands were coming from the rally at the Ellipse.

About five minutes later, I heard a shout and saw a person had gone past the plastic mesh barrier on the north part of the west side of the Capitol grounds. He shouted encouragement. He was followed by a couple of dozen others.

The psychological breach of the flimsy barriers was similar to an earthen dam being breached. The trickle of people became a flow. The flow became a flood.

Tens, then hundreds, then thousands flowed toward the west side of the Capitol.

This picture is from early in the process. You can see how ineffectual the plastic mesh was.

This picture was taken three seconds later. The flow of people is increasing.

12:56:31, 18 seconds later. The pressure of the mass of people is turning into a flood moving toward the Capitol. Only a tiny fraction of the hundreds of thousands coming from the Ellipse have reached the barriers at this time.

That small fraction is still hundreds of people, rapidly becoming thousands of people. This picture is five seconds later. The first protestors have not yet reached the Capitol or the scaffolding.

This picture was taken about a minute and a half after the plastic mesh barriers were pushed through. The protestors are getting close to the Capitol but have not reached the scaffolding, which can be seen on the upper right.

Notice the section of stand-alone fencing on the ground in the middle left, and the gaps in a third plastic mesh barrier with the signs on it.

More protestors arriving at the scaffolding area 25 seconds later. It is very close to 12:59 pm. The Police Lives Matter flag was prophetic.

President Trump’s speech ended about 01:12 p.m., about thirteen minutes later. The protesters were overwhelmingly supportive and protective of the police.

There were very rare exceptions.

The post Minimal Barriers and Timing at the US Capitol, 6 January, 2021 appeared first on AmmoLand.com.