Democrats Imposing Measures on Citizens They Condemn for ‘Undocumented’ Foreigners 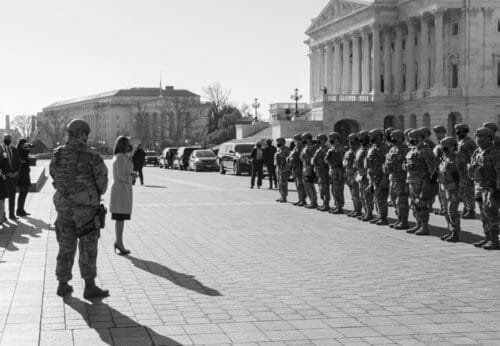 U.S.A. – -(Ammoland.com)- “Following the January 6 insurrection, a seven-foot, non-scalable fence was added around the Capitol Hill complex,” Business Insider reveals in a Sunday article on “ramped up” security for the Biden inauguration. “Barbed wire sits atop the fence, providing an additional barrier to entry to the grounds.”

“This morning while in that half-awake /half-asleep state, out of nowhere I thought ‘Green Zones,’” WarOnGuns Correspondent DDS told me in an email sent over the weekend. “In places like Baghdad and Kabul, we built secure areas to protect our people and the government we were trying to establish from hostile militias. I never thought I would live to see a similar process going on in our national and state capitals. Yet here we are.”

These changes appear slated to last beyond the inauguration and become “the new normal.”

“Dems Demand Public Locked Out of Capitol Grounds Forever – Publish Bill To Install Fence Despite Claiming Walls Don’t Work,” The National Pulse observes. “The bill – H.R.339 – seeks to ‘direct the Architect of the Capitol to design and install an appropriate fence around the perimeter of the United States Capitol, including the East Front and the West Front.’”

Curiously, bill sponsor Ritchie Torres has in the past condemned such efforts, at least when meant to secure the country from foreign nationals attempting to bypass immigration laws.

“@realDonaldTrump is diverting money from important infrastructure, military projects & #PuertoRico for a border wall intended to divide our country,” Torres tweeted in 2019. Evidently, keeping unvetted aliens out of the country divides us but keeping citizens out of a Capitol that they paid for unifies us. Or something.

That’s not the only cognitive dissonance on display.

“The Capitol Police arrested a man for possession of a handgun and over 500 rounds of ammunitions [sic] after he presented ‘non-government issued’ inaugural credentials at a police checkpoint in Washington, DC,” Mediaite reports. Sounds like a real threat, doesn’t it? Especially with initial fake news reports saying he tried to use a “fake” ID.

Except you need to go to a source that fleshes out more details to find he’s a security guard, he was lost and asking them for directions, he is licensed to carry in Virginia and says he forgot the gun was in his vehicle, and the search was predicated on Capitol Police noticing pro-gun decals on his truck. Where have we seen that danger to supposedly protected speech before?

And while inaugural credentials are no doubt necessary security measures, the thought can’t be ignored that one of the points Democrats make about voting (and isn’t that what this whole electoral “controversy” necessitating increased security is about?) is that requiring government-issued IDs to vote “disenfranchises” minorities?

Apparently, the problem is (or was) recognized enough to hold a House committee hearing in 2006 on “’You Don’t Need Papers to Vote?’ Non-Citizen Voting and ID Requirements in U.S. Elections.”

“U.S. defense officials say they are worried about an insider attack or other threat from service members involved in securing President-elect Joe Biden’s inauguration, prompting the FBI to vet all of the 25,000 National Guard troops coming into Washington for the event,” Chicago’s WGN9 reports.

That’s a lot of government guns being deployed against unarmed citizens whose right, by Constitutional mandate, “shall not be infringed.” Hey, it’s not like Democrat gun-grabbers are really “anti-gun.” They just want to be the ones controlling them all.

We should have no problem with vetting the troops, although you’d think that would be a condition of continued eligibility to be in the Guard. Unlike Fort Hood. More likely, this is a political purge that will be used to conflate members who take their oaths seriously (including refusing unlawful orders to disarm American citizens) with white supremacists.

What we should all have a problem with – except for Democrats and “cheap labor Republicans” – is the foreign nationals who enter this country illegally who undergo absolutely no vetting and put the entire population, not just protected politicians, at risk. Unlike the “rigorous security screening” politicians lie about when “legally” admitting “refugees” from places it is impossible to obtain complete records from, those who sneak into the country undergo no scrutiny at all.

No problem, Joe Biden says. In fact, he’s counting on it.

“Biden will announce legislation his first day in office to provide a path to citizenship for millions of immigrants in the United States illegally,” the Associated Press reports. That’s because, unlike head-in-the-sand state and national “gun rights groups” that refuse to even talk about it, he knows they will vote overwhelmingly Democrat and overwhelmingly anti-gun, meaning an unchallengeable majority will be able to pass whatever gun grabs they dream up and be upheld by judges they appoint.

Lured in by such promises, a “caravan” comprised of thousands of Hondurans is on its way to our southern border. The Biden administration’s response?

“[C]oming right now does not make sense for their own safety…while we put into place processes that they may be able to access in the future.”

The great object is not to protect U.S. sovereignty, or even pretend to adhere to COVID-19 restrictions being used to decimate the economy of the middle class. It’s to make sure the tax-funded infrastructure is in place to process them and locate them to where it will have the most impact. Like “red states.”

And why stop there? If the Democrats repeal the 60-vote Senate filibuster/cloture rule, as Biden “signaled openness” to, it will take only a simple majority to pass new gun controls, pack the Supreme Court, provide statehood for the District of Columbia and Puerto Rico, which will result in four new anti-gun senators, and millions of new anti-gun Democrat voters.

On the bright side, they will no longer need to steal votes.

I was going to point out the hypocrisy of how, in order to even pretend to be consistent, requiring a government ID to buy a gun must also disenfranchise minorities the same way it (supposedly) does with voting, but the thought strikes: Give it a few years under total Democrat rule and we won’t be able to do that anyway. At least “legally.”

Unless you believe the lie that “no one is talking about taking your guns.”

The post Democrats Imposing Measures on Citizens They Condemn for ‘Undocumented’ Foreigners appeared first on AmmoLand.com.