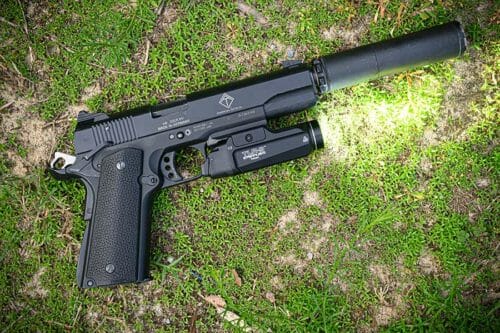 U.S.A. -(AmmoLand.com)- When it comes to tactical lights, more is always better. Sure, some companies will tell you that you only need a few hundred lumens for indoor work, but I need to wield the power of the Egyptian-Sun-God, Ra whenever I hit my light’s “on” switch.

Problem is, the majority of the guns I carry or use for home defense are designed around fitting mid-sized or compact firearms. And as a result, don’t tend to be overwhelmingly bright – and I mean that in the most literal sense. Sure, 400-lumen pistol lights are bright as hell in a dark house, but I live out in the sticks. That means I often want something with a little more throw and lumens for positively identifying predators of the animal or hominid variety at a distant treeline.

This is why I was thrilled at SHOT Show 2020 to see Streamlight release their new tac-light – the TLR-9. For the uninformed, the TLR-9 is an extra-long version of the TLR-7 pistol light that uses a pair of CR-123 batteries to power its retina-melting 1,000-lumen emitter. The thing looks like the stretched limo version of the compact Streamlight options.

Which is why it pairs perfectly with long-barreled firearms like the Glock 40 Pistol, or my favorite, the M1911.

And it just so happens that my favorite tool to discreetly dispatch the smaller critters is a rimfire 1911 from ATI – the GSG 1911. While already a slick setup with just the light, add in a quality lightweight suppressor like my SlingShot Ti from Innovative Arms, and you have a real winner. It’s Hollywood-quiet, silly accurate, and bright enough to clearly illuminate targets past 50 yards – what more could a shooter ask for?

The Streamlight TLR-9, like all the models, features fully ambidextrous controls that toggle the light on and off. If a shooter presses and holds the buttons down, the light will only stay on for as long as the button is held. This is ideal for when shooters want to quickly verify a potential threat without giving themselves away too much. Though truth be told, with a 1,000 lumens bellowing out of the TLR-9, everyone will know exactly where you are – except whom or whatever was foolish enough to look directly into the light.

Another great thing about the TLR-9 is that it’s one of the new Flex models from Streamlight. Meaning, it ships with both a high and low switch. This may not seem like much, but it can make an enormous difference for shooters with either small or large hands that would otherwise struggle to actuate the switches.  Speaking of which, both of the sets of Flex buttons are designed to protrude just barely behind the trigger guard on both sides. This allows a shooter to either use the button with their trigger finger or with their support hand’s thumb.

One thing about other tactical lights that always bothers me is the lack of mounting options on many of them. For certain guns, this equates to the shooter having to contort their grip to use the light. Which is an annoyance on a gun range, but could be a serious issue in a gunfight where adrenaline dumps make even the most dexterous shooter’s hands into an all-thumbs mess.

Thankfully this isn’t an issue with Streamlight products. Most of their TLR-series ship with what they call a key kit. This kit consists of six interchangeable plates that permit mounting the Streamlight product on a very major variety of handgun. Moreso, it also has a mount for Picatinny rails and a pair for mounting more forward and more rearward to better suit an individual shooter’s taste.

Here’s one that gets me in trouble oftentimes. Once you get a taste of the good stuff, it’s hard to go back to boxed wine. As a result, I’m very accustomed to high-quality lights with great features, solid durability, and incredible performance. But there’s no free lunch, so the Streamlight isn’t a bargain-bin $30 light.

That said, with an MSRP of $200 (cheaper $$ online) the TLR-9 Flex isn’t exorbitantly expensive. But that price point will put it beyond the financial means of many new, or cash-strapped shooters. The great news is that these lights are rarely ever found at MSRP, and often $50 or more below it. In fact, after a quick search, I was already able to find it for $35 less than retail. So shooters should keep an eye on AmmoLand’s daily deals to make sure they get it for as low a price as possible.

But even if a shooter pays full retail for the Streamlight TLR-9 Light, they’re still getting their money’s worth. It’s a high-quality, super-bright tactical light with excellent ergonomics, tons of different interfaces and it uses common batteries. In fact, the only thing I wish they would have changed on the light would be to incorporate their rechargeable 18650 battery instead of a pair of CR-123s. But, that’s a minor gripe.