SAR-USA Magic Shotgun Review – Do You Believe in Magic? ~ VIDEO 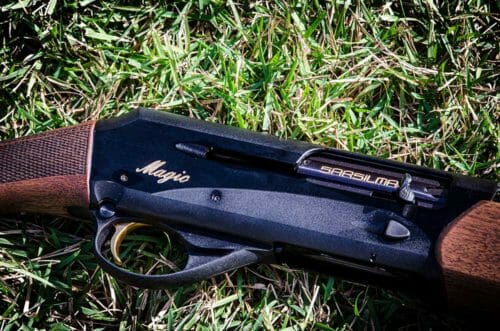 U.S.A. -(AmmoLand.com)- A shooter’s choices when selecting a semi-automatic sporting shotgun are vast. The market is teeming with options of all varieties. Some brands focus on luxury, charging premium prices, and providing beautifully crafted firearms. Others focus on providing more affordable firearms that still attain high levels of reliability. SAR USA has brought several interesting firearms to the U.S market in recent years, including shotguns that give shooters the best of both worlds. The SAR Magic bridges the gap between luxury and economy autoloading shotguns.

It sports beautiful walnut furniture and is available in three different finishes, the magic black seen in the pictures, as well as the visually striking magic red and brown. The gun has a 5-round magazine tube and is chambered for up to 3-inch 12 gauge shells. This ensures that the shooter has a variety of choices when it comes to selecting ammunition. It comes equipped with either a 24-inch or 28-inch barrel, (the latter is shown in the pictures). The gold-colored markings on the bolt and receiver and the gold trigger all give the gun a very distinctive look. The SAR Magic gives shooters a rugged shotgun to bring into the field with a more refined form factor than many peers in its price range.

The SAR has an MSRP of $777.77. This price is comparable with many popular American offerings, such as Remington’s V3. The SAR does have some features that separate it from the competition in a number of ways. Its weight, at just over six and one-half pounds, is more in line with that of a more expensive Benelli field shotgun than it is with similarly priced offerings like the Mossberg 930 or Remington 1187 Sportsman Field. Its light and agile feel make it a great choice for shooting sporting clays or winged game. The balance of the weight also plays a big part in the gun’s overall feel. The combination of lightweight and sturdy-feeling construction allows the gun to avoid the pitfalls of many overly light firearms. The Magic does not suffer from the issues of some 12-gauge shotguns that become violently jumpy and hard recoiling as a result of their lightweight.

The gun can also be held to the shoulder and aimed for long periods of time without the discomfort that can set in when trying to do the same with a heavy shotgun. The benefit of the light weight becomes instantly recognizable when moving around with the shotgun. For instance, walking from station to station at a sporting clays course is much less tiring when your gun isn’t weighing you down. This is the kind of gun you could sling over your shoulder and virtually forget it’s there. You might think a pound or a few ounces wouldn’t have much effect on a shooter carrying a firearm, but after over an hour of moving around with a gun, it becomes all too clear that it does.

The Magic’s controls feel smooth under manipulation. The loading port works well and doesn’t tend to eat the shooter’s thumb up over the course of a long shooting session. The bolt release is generously sized and easy to actuate. One control on the gun that took some getting used to for me, even as a long-time Benelli fanboy who had to adapt to many manuals of arms, was the carrier lock. The small button located at the rear of the loading port must be pressed in order to lock the bolt to the rear when the hammer is back. While this may be natural to owners of certain shotguns with similar mechanisms, those with mechanisms where the bolt locks back every time the bolt is pulled to the rear with an empty gun, and other differing mechanisms, will need some time to get used to it. Unless you fire the gun until empty, or dry fire it when empty, the bolt does not lock to the rear until the shooter depresses that button before pulling the bolt rearward.

The SAR Magic performed well over the course of testing. It handled a variety of birdshot from various brands with no malfunctions whatsoever. Even when dirty, the gun can be shot fast without hanging up. The gun does have some quirks that take a little bit of getting used to. Even with generous lubrication, the shotgun has a loud action. Even with the high volume of a 12-gauge round going off, shooters–especially those using electronic hearing protection–can hear a loud metallic clunk as the bolt reaches its rearmost position. The audible clunk isn’t all that distracting and doesn’t worry me considering the fact that the action performs smoothly.

The trigger is crisp and not too heavy. In fact, I would say it is on the lighter side compared to other field shotguns. This makes follow up shots on moving targets more obtainable. The red fiber
optic front sight is easily visible. It glows brilliantly when the sun is beaming down directly onto the gun. It is still visible in the shade, but harder to pick up in fading light conditions. The gun mounts very comfortably. The stock has a generous comb that is friendly to both left- and right-handed shooters. The position of the stock in relation to the top of the gun’s receiver really locks the shooter into place with a solid cheek weld and good sightline along the rib. It puts the shooter’s eye right where it needs to be to line up the fiber optic bead with a target. Overall, the gun is a pleasure to shoot with target ammunition and does not leave anything to be desired in terms of shootability and performance. After shooting, the Magic was a breeze to field strip and clean.

The SAR Magic is a good value at just under $778. For your money, you are getting a gun that looks and feels like it should be more expensive than it is. The only part of the gun that I feel could have used more attention was the box. This is more of a nitpick than a real problem, but it seems fitting for such a nice gun to come in some form of the useful hard case rather than a cardboard box. While adding a nicer box or case for the gun may add to its high-quality feel, the price of the gun as it ships is hard to argue with, and could be slightly more expensive with a hard case factored in. As someone who loves shotguns, especially higher-end semi-automatics, I find that the Magic checks many of the boxes I seek to fill when choosing a semi-automatic sporting shotgun. It has intriguing aesthetics that set it apart from other field shotguns. It’s lightweight, great trigger, fiber optic bead and the comfortability of its furniture all add up to make it a solid choice for the discerning shotgun shooter who wants a good quality gun at a price that doesn’t break the bank.

Sam is an NRA certified instructor and a videographer. His love for guns of all kinds started at a young age with an interest in military history. He began working with Renaissance Firearms Instruction while still in High School and continues to film videos for their channel to this day. He is currently pursuing a career in Law Enforcement in North Carolina. Sam is an avid shooter and is especially fond of handguns and braced firearms.

The post SAR-USA Magic Shotgun Review – Do You Believe in Magic? ~ VIDEO appeared first on AmmoLand.com.