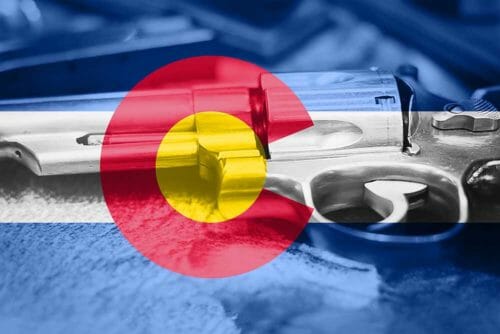 U.S.A. –-(AmmoLand.com)- As freshman Colorado Rep. Lauren Boebert uses the Jan. 6 storming of the U.S. Capitol building to underscore her desire to carry a sidearm while serving in Congress, back home Centennial State lawmakers are reportedly preparing legislation to mandate a waiting period for the purchase of a firearm, and a safe storage requirement.

The Colorado Sun reported that Democrat State Rep. Tom Sullivan will introduce the waiting period measure. It would prevent Coloradoans from purchasing and taking possession of firearms on the same day, instead imposing a waiting period “potentially of five days,” the newspaper said. According to the report, Democrat Rep. Steve Woodrow of Denver is assisting Sullivan on the bill.

Sullivan is a gun control supporter and the father of a victim of the Aurora movie theater shooting in 2012. The killer in that case passed background checks.

The newspaper noted Colorado Democrats held onto their legislative majority and “are emboldened to press forward with more new gun regulations.”

But do waiting periods work? A detailed account of the period leading up to the Aurora shooting at Wikipedia suggests a waiting period would not have mattered. Killer James Holmes legally purchased the guns he used in the July 20 mass shooting weeks before the attack. He bought a Glock pistol on May 22, 2012, and a Remington shotgun on May 28. On June 7, he purchased a Smith & Wesson semi-auto rifle. He was able to pass background checks all three times because he had no prior criminal record.

Another Democrat, Rep. Kyle Mullica of Northglenn, will reportedly introduce the safe storage measure. According to the Colorado Sun, his bill “would impose fines and potentially even jail time on gun owners who don’t use a safe, trigger lock or cable lock when their weapons are being stored. It also would also require gun shops to distribute trigger or cable locks with every sale or transfer of a firearm.”

House Bill 2510 “Requires (the) owner or possessor of (a) firearm to secure (the) firearm with trigger or cable lock, in (a) locked container or in (a) gun room except in specified circumstances.” Violators would be punished by a fine of up to $500. In the event a minor obtains an unsecured firearm as result of the violation, the gun owner could be fined up to $2,000.

But possibly the worst of several gun control bills filed in the Oregon Legislature this year is Senate Bill 585, which would repeal the state preemption statute. This would open the way for anti-gun Beaver State politicians, in cities such as Portland, Salem or Corvallis, to set up their own gun laws. The Oregon Firearms Federation has a list of proposed gun laws on its website.

Anti-gunners have targeted preemption laws since they were first adopted in many states beginning more than 30 years ago. These statutes guarantee uniformity of the gun laws from border to border in the states where they are in force. A prime example is Washington’s law, which dates back to 1983 with an update and revision in 1985. Here’s what the Washington statute—which is also under repeated attack—says:

“The state of Washington hereby fully occupies and preempts the entire field of firearms regulation within the boundaries of the state, including the registration, licensing, possession, purchase, sale, acquisition, transfer, discharge, and transportation of firearms, or any other element relating to firearms or parts thereof, including ammunition and reloader components. Cities, towns, and counties or other municipalities may enact only those laws and ordinances relating to firearms that are specifically authorized by state law, as in RCW 9.41.300, and are consistent with this chapter. Such local ordinances shall have the same penalty as provided for by state law. Local laws and ordinances that are inconsistent with, more restrictive than, or exceed the requirements of state law shall not be enacted and are preempted and repealed, regardless of the nature of the code, charter, or home rule status of such city, town, county, or municipality.”

Currently, the City of Seattle is being sued by the Second Amendment Foundation and National Rifle Association, along with two private citizens, for adopting a “safe storage” ordinance in direct violation of Washington’s law. A similar lawsuit against the City of Edmonds won at trial.

Guns are a hot issue for a number of reasons. An admittedly anti-gun administration is coming into power with its widely reported gun control agenda. And now, thanks to a gutsy, freshly-minted congresswoman from western Colorado, the right to keep and bear arms is in the spotlight because of what occurred on Jan. 6 in the nation’s capital.

Rep. Boebert arrived in the District of Columbia intent upon carrying a sidearm for personal protection. The deadly demonstration at the Capitol brought that issue to the front burner. She was not armed on the day of the riot, but in an interview with Fox News, Boebert asserted a few other members of Congress were armed.

“And we kind of all huddled close to the ones who did” have guns, she said.

“It was just like this ‘I told you so’ moment,” Boebert said. “I wish that I would have just not listened. Because my life is worth defending. The people next to me, their lives are worth defending.”

There is no small irony in Boebert’s saga. While she has traveled to Capitol Hill in order to defend the rights of her constituents and fellow Colorado gun owners, there are efforts underway in Denver to further erode those same rights.