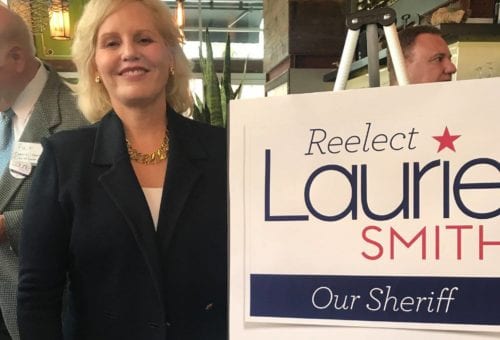 It’s yet another part of an unfolding saga AmmoLand has been covering on the corruption that California’s “may issue” concealed carry permitting scheme makes inevitable. Limiting issuance to politically connected and well-heeled campaign donors not only denies equal protection to all but particularly discriminates against the economically disadvantaged and minorities. Unsurprisingly, no one in a position to do something about it wants to even admit that dimension of the scandal, let alone investigate it.

While so far Smiths’ underlings have taken most of the legal heat, grand jury testimony that she tried to hide her snout in the trough with a cheap seat deception ploy tells us much. And the transcripts tell us a lot more about elitist hypocrisy that relies on bought government officials to enjoy “privileges and immunities” over the unalienable rights that they would deny the masses.

The CEO who “calls US inaction on gun control ‘insanity’?”

The CEO of a company so ludicrously “virtue-signaling” that it bans gun emojis?

The CEO who shows bipolar-grade cognitive dissonance when you take his statement on encryption and substitute the word “gun”? And how does that square with Apple tag-teaming with Amazon and Google to destroy alternative social media site Parler?

The CEO that Apple spent $310K providing “personal security” for in 2018? In fairness, that’s dwarfed by the $1.6M Amazon spent on Jeff Bezos. And Facebook spending $10M on Mark Zuckerberg is practically an admission of the megalomaniacal delusional paranoia going on in that guy’s head. No wonder these people are “anti-gun,” at least for the rest of us.

What does it matter to them if one of their disarmed customers obeying manifestly unconstitutional disarmament orders is killed because he or she can’t afford to “donate” enough to get one of those permits that shouldn’t exist in the first damn place? They have millions of customers to replace the fallen. Besides, they’ve got theirs, or a least their “executive security agents” do. That’s thanks to “common-sense gun safety laws” exploited by trough-feeding, oath-breaking “Only Ones” like Sheriff Smith, who not only doesn’t have to sit in the nosebleed seats she had her flunky buy for ethics policy subterfuge, but she also doesn’t have to walk back to her car in the dark after the game unarmed.

Like the [LANGUAGE ALERT!] George Carlin routine went, “It’s a big club and you ain’t in it.”