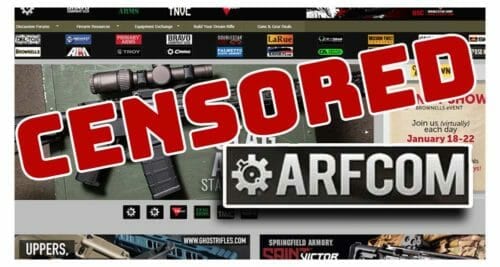 U.S.A. –-(AmmoLand.com)- In what can only be assumed to be a concerted effort by the technocracy, a new round of conservative purges hit social media platforms.

Twitter banned the President of The United States shortly before also banning General Mike Flynn. This move came after protestors entered the Capitol Building on January 6th. President Trump called for calm and asked protestors to go home, yet that wasn’t enough for the social media giants not to take advantage of the situation. They exercised their immense power to silence and deplatform the leader of the free world. YouTube actively removed videos of Trump speaking, claiming that they violated their terms of service.

CNN, MSNBC, and even a pro-gun advocate tried to blame Trump for a Capitol police officer firing his gun through a locked door hitting and killing unarmed Air Force veteran Ashli Babbitt. These are the same people that tried to blame Officer Darren Wilson for shooting Mike Brown when the strong arm robber tried to grab the cop’s gun.

It seems like these media giants only lay the blame at the feet of those that fall on the opposite side of the political spectrum from themselves. When the cities burned all summer long, and Anarcho-communist held control of large parts of cities, the talking heads called the protest “mostly” peaceful. They repeated the day’s slogan, and Kamala Harris told the rioters and looters to “keep it going” as cities were turned into warzones.

Those that spoke out against vandalism and targeted violent attacks were called hate mongers. Big tech companies banned patriot groups while letting Antifa organize and run wild over their platforms. Leftists even blamed a Trump supporter in Seattle when a hate-filled Antifa member shot and killed him in an unprovoked attack because of his MAGA hat.

The election came, and the media crowned Biden as the president-elect before the votes we even counted. Anyone who pointed out blatant voter fraud was marked a conspiracy theorist by social media fact-checkers. These are the same fact-checkers that marked Kamala Harris’s amicus brief as fake when I posted it to Facebook without any context. This Silicon Valley giant is the same company that banned me for life when I reached out for comment on the obvious bias as mismarking my post. It is the same place that employed me for six figures before I had to quit and walk away because I couldn’t look at myself in the mirror anymore.

Remember, last year, when the VCDL held their lobby day, there was only one arrest, and that person wasn’t involved with the event. The tens of thousands of gun owners left Richmond cleaner than when they arrived. There was no violence or burning of cities, yet we were the extremist.

“These social media companies are private companies and can do what they want,” they tell us. If you don’t like it you can always build your own platforms,,, right? At least, that is what the left has always told us. That is until they move the freedom goal post further left.

So that is what conservatives did. Conservatives started real free speech platforms like Parler or Gab. It was going great for a while. Then on Wednesday, The New York Times attacked Gab and blamed them for the events at the Capitol. Make no mistake; their goal is to shut down the platform because they can not control it.

Parler has been the go-to platform for conservatives who were sick of the left-wing tech giants’ censorship. We did our own thing, but the left-wing technocrats couldn’t let that happen. That is why on Friday, January 8th, 2021, Apple gave Parler 24-hours to goose-step back-in-line and purge their site of “objectionable content,” or Apple threatened to remove the app from the app store. They eventually did along with Google, but Parler was still up on the web.

They were still up on the web until Amazon booted them off their server cloud with little warning. Parler is now scrambling to find a new host. The site is currently down. The techno-brown shirts are trying to be thought police and play out Stalin’s wildest fantasy of complete control over the populace.

AR15.com was next to fall victim.

The attacks continued today as GoDaddy removed the popular AR15.com  forum from their servers without a single warning. ARFCOM is home to one of the biggest gun communities in the world.

AR15.com Backup Site [is now] Live, Switching to First Amendment Friendly Site Registrar On Monday, January 11, 2021, I received notice from our site registrar that AR15.com had violated their terms of service and that AR15.com would be shut down immediately. The registrar’s decision to de- platform AR15.com was final and no method to appeal was offered.

It remains unclear specifically what content allegedly violated the registrar’s terms of service. However, I am happy to report that we have found a new, First Amendment-friendly site registrar and we have begun the process of transitioning AR15.com to the new registrar. We expect the switchover to take up to 5 days. During that time, our famous “AR15.com” URL will not be usable. Once the switchover is complete, AR15.com will be fully restored to normal function. In the meantime, I welcome freedom lovers and firearm enthusiasts to visit us at our temporary URL: www.ar15-backup.com. We will post on the backup site when the normal AR15.com has been completely restored.  ~ Juan Avila, President & Co-Founder, AR15.com

We can only assume that with a new Democratic administration coming in that they and their sympathizers in big tech are targeting not only conservative websites, but also pro-gun websites. Owners of gun websites are left wondering who is next and when the hammer and sickle will drop again.

So it brings me to the question, what can we do to fight back against the tech billionaires and crony politicians that are now in charge of the country and much of the world? I am not sure, but a person can only be pushed so far.