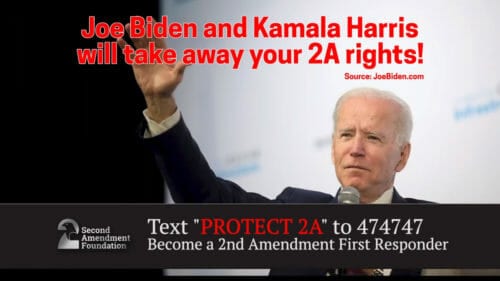 U.S.A. –-(AmmoLand.com)- With Capitol Hill now under Democrat control and Joe Biden preparing to fulfill a lifelong dream of being president Jan. 20, rough times may be ahead for the firearms community, so the Second Amendment Foundation is taking an aggressive posture “to protect the Second Amendment” from Biden and Kamala Harris.

The two-pronged effort began with the announcement that SAF had signed an agreement with Parscale Strategies to produce digital media marketing and social media advertising. Founder and CEO Brad Parscale served as a digital consultant and political adviser to Donald Trump’s 2020 presidential campaign, and also served for a time as campaign manager. He also served as the digital media director on the president’s 2016 campaign, SAF said.

The ad tells viewers their Second Amendment rights “are under attack like no other time in history.”

“Biden and Harris have pledged to make taking away your Second Amendment rights a top priority of their administration,” the hard-hitting message says.

“Joe Biden and Kamala Harris have been crystal clear about their gun control and confiscation intentions since Day One,” said SAF founder and Executive Vice President Alan M. Gottlieb. “There is no way to misunderstand where they want to take America, and in order to get there, they plan to trample the Second Amendment. We’re launching a new television advertising effort to recruit more 2A First Responders.”

Regarding the agreement with Parscale, Gottlieb noted in a prepared statement, “This will take SAF to new levels of support and influence at a time when it is most needed to counter the radical gun ban lobby and the Biden Administration.”

Gottlieb called it “a major step” for SAF, which has increasingly gained prominence over the past several months.

“Brad built the whole Trump Facebook, Google, Twitter and other digital media campaigns,” he noted. “This will undoubtedly take SAF to new levels of support and activity, which we predict will become increasingly important as 2021 unfolds.”

Parscale, quoted in a SAF news release, was blunt.

Gottlieb told Ammoland News the “2nd Amendment First Responder” project has brought “tens of thousands of gun rights activists to the front lines” of the gun rights battle, at a time when things are just beginning to heat up. Biden’s controversial gun control scheme has been posted online for months, and covered extensively by Ammoland. The most alarming tenets of what some believe is a “Biden blueprint” for reducing the Second Amendment right to a regulated privilege are these:

“We’ve got a fight on our hands,” Gottlieb acknowledged. “Protecting the right to keep and bear arms is going to require every resource we can muster.”

It’s not just a federal threat gun owners are facing.

In SAF’s home state of Washington, legislation was pre-filed to prohibit the open carrying of firearms at demonstrations in public places, especially on the capitol campus in Olympia. In years past, gun rights activists have appeared on the Capitol steps with rifles and exposed sidearms. Washington is an “open carry” state.

Senate Bill 5038 is sponsored by two anti-gun-rights Democrats, State Sens. Patty Kuderer and Mona Das. Both maintain it is a “commonsense approach to prevent tragedy during emotionally charged situations.”

They were scheduled to formally introduce the bill on the opening day of the Legislature, Jan. 11.

One reason might be that demonstrations are held outside, and court proceedings are held inside courthouses.