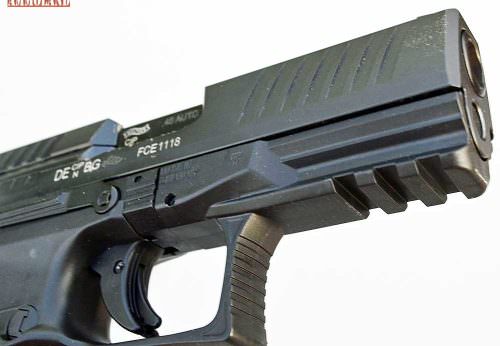 Mike Searson, takes the Walther PPQ M2 Pistol in 45 ACP to the range and comes back very happy.

I have yet to meet a shooter that purchased a Walther PPK that did not do so on account of watching a James Bond movie or reading one of the books and when Walther turned to polymer in the mid-1990s with the P99, they lost me as a fan. Not that it was a bad pistol; it simply lacked the classic lines of the PPK, P5 or even the P-38.

In the years since the company has been improving by leaps and bounds in the realm of the polymer pistol and I would give them a second look when I would see deep discounts or fantastic rebates, yet that is about as far as it went.

Let’s face it, most gun shops place them on the second or third shelf, so they don’t jump out at you, and truth be told, my tastes go for the older firearms. Not necessarily curios, relics or antiques, but the guns they made when I was a kid.

That’s when it hit me.

I literally could not remember the last time I saw a Walther that had been traded in, offered on consignment, etc. and I say this as the guy who gets the first dib’s on trade-ins on my local gun shop circuit because my collecting habits are known far and wide.

Apparently, when people buy them, they tend to hold on to them.

So when I was offered a chance to not only test a new Walther but the company’s first pistol chambered in 45 ACP; I was on it like a fat kid on a ham sandwich.

The Walther PPQ (Police Pistol Quick Defense Trigger) 45 M2 is the company’s first effort in a 45 ACP pistol and it is a damn good one. The pistol ships in a hard case with a standard and larger interchangeable back straps. It sports adjustable sights, a polygonal rifled barrel, Tenifer finish, and is fully ambidextrous.

When the pistol arrived the first thing I noticed was the grip and how perfect it felt when I grabbed it. If Walther has ever consistently gotten one thing right over the past three decades, it is the grip angle. Then I noticed the proof marks on the slide and probably said aloud how they reminded me of the same markings on my H&K pistols (well duh, they’re German proof marks, idiot).

At the range with a few hundred rounds of Freedom Munitions 230 grain FMJ, we were treated to one of the finest factory striker-fired trigger pulls in recent memory. Crisp with no slop, it was somewhere between that of the HK VP-9 and the Steyr series of striker-fired pistols. Checking our target downrange we achieved multiple sub 1.5” groups and a few outside of that extending to 2.95”

Because it is a relatively new pistol to the market, you may have a hard time finding holsters and such. You either need to choose from what’s out there, go the custom route or wait for the aftermarket to catch up.

This happens with every new pistol and hopefully, we will see more accessories for the Walther PPQ M2 down the line. As mentioned previously the pistol has a distinct look that may be off-putting to some shooters. It may look ungainly, but we found it to be extremely well-balanced.

Our only real complaint was the lack of a threaded barrel. We are sure that some aftermarket companies will offer some, but hope that there will be a threaded option from Walther down the road. They offer this on a 9mm version

Walther’s PPQ M2 in 45ACP is a well-made and reliable handgun. It is priced below similar pistols in this category from HK, Glock, FN, and S&W making it a very ambitiously priced handgun with an even lower actual price than MSRP.

Mike has written over 2000 articles for a number of magazines, websites and newsletters including Blade, RECOIL, OFF-GRID, Tactical Officer, SWAT, Tactical World, Gun Digest, Examiner.com and the US Concealed Carry Association as well as AmmoLand Shooting Sports News.