Most Organized Pro-Trump Group at the 6 January Protests: Anti-CCP 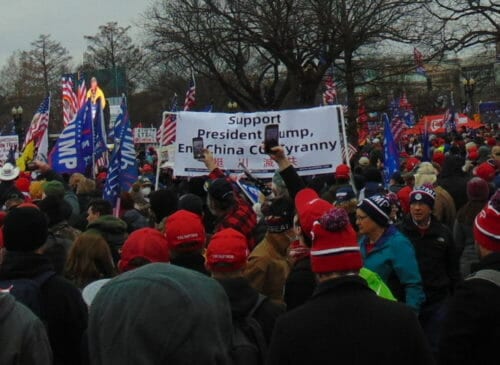 U.S.A. –-(AmmoLand.com)- The fight to restore and retain the most basic freedoms in the United States may be most well understood by people who have experienced oppression in other parts of the world. Most of the world has no First or Second Amendment rights.

They could see what was happening in the United States with a clarity lacked by many Americans.

As Trump supporters, patriots, and attendees walked along the Mall toward the Washington Monument, there were many Chinese Americans asking for signatures to oppose the CCP and handing out literature. They were well organized. In perhaps 3/4 of a mile, this reporter saw a dozen couples stationed along the way. This married couple was happy to pose for a photograph.

Closer to the Capitol, this wall of signs protesting the disputed election, and the close ties between former President Joe Biden and the CCP were prominently displayed for all passersby. This sort of display takes planning, forethought, and organization.

The anti-Chinese Communist Party group had an organized car caravan driving around the capitol. Their signage was clear. It took time and efforts to create those signs and organize the caravan.

The spelling on the sign below is less than perfect, but the message is clear.

Those who have lived under the rule of the CCP are warning the citizens of the United States. There were other, smaller, individual protest signs against China Joe as well, displayed by people who did not appear to be from China.

The Chinese Communist Party’s plan to dominate the world and supplant the United States as the foremost world power is now well known. The best, most unified, and clear exposition of that plan is put forward in The Hundred-Year Marathon,  The author is a noted sinologist, who speaks and writes fluent Mandarin. He supported the transfer of wealth and technology to China for decades until he became aware of the Chinese plan to use the largess of the West to supplant the United States as the dominant power in the world. President Trump made the world aware.

There were several smaller groups that had organization and cohesion.

The most prominent was the Proud Boys. As a group, they seemed to have the largest percentage of black and Hispanic members. I did not see them engage in any violence, although they chanted their antipathy toward Antifa.

After the rally/protest/march, this reporter and a correspondent from Italy had a conversation. Max, as the correspondent introduced himself, said the whole world was watching the events in Washington, D.C.

He said the whole world is facing an extinguishment of freedom for the foreseeable future. Your rights, he said, are being taken away in small nibbles, so you do not notice. You give up a little here, a little there, and soon you have no free speech. He said free speech no longer exists in Europe in any real sense.

Dean Weingarten has been a peace officer, a military officer, was on the University of Wisconsin Pistol Team for four years, and was first certified to teach firearms safety in 1973. He taught the Arizona concealed carry course for fifteen years until the goal of Constitutional Carry was attained. He has degrees in meteorology and mining engineering, and retired from the Department of Defense after a 30-year career in Army Research, Development, Testing, and Evaluation.

The post Most Organized Pro-Trump Group at the 6 January Protests: Anti-CCP appeared first on AmmoLand.com.

Is Steel-Cased Ammunition Really All That Bad? ~ VIDEO