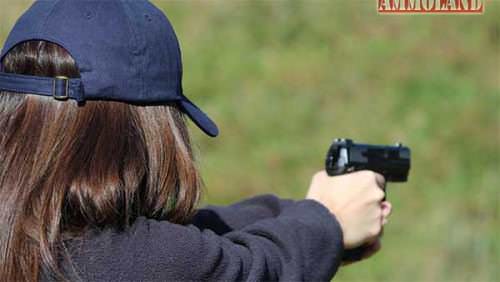 U.S.A. -(AmmoLand.com)- We start with a news report from the Star-Telegram in Fort Worth, Texas.

You are a 67-year-old woman. You live outside of town. You return home with two friends shortly before 8:30 in the morning. As you head down your driveway, you notice a strange car parked near your house. All three of you get out of your car and go look for your unscheduled visitors. You find two men stripping the property from one of your buildings.

You’re armed. You draw your firearm and tell the two criminals to stop. Your friends call the police. You and your friends hold the burglars until the police arrive.

Officers arrest your two criminals on burglary charges. One of the robbers is also held due to outstanding drug and firearms warrants from another county. The police return your property.

This wasn’t her usual morning. Our 67-year-old female defender recognized that two men in their twenties were a potential menace. She presented her firearm, but did not see an immediate unavoidable lethal threat. She got help from her friends. She called 911 and remained at the scene to talk to the police.

Newspapers print shocking stories because we love to read them. When it comes to self-defense, the news media barely covers the day-to-day events that don’t end in violence or injury. In this case, our defender protected herself and her friends, she stopped a crime in progress, and she never had to fire a shot. That is what usually happens.

We see armed defense thousands of times a day and nine times out of ten the defender never has to fire a shot. Just as in this case, criminals usually stop what they are doing when they see that their intended victim is armed. That means that most of the time when we present our firearm we don’t have to press the trigger.

That is a lesson worth learning because it can keep us out of jail. When we go to the range, make it a point to also present our firearm, line up the sights, and not press the trigger. We should include that don’t-shoot exercise in our dry-practice sessions as well.

If we’re going to meet criminals in our backyard, it is good to have friends along. It is better to have friends who have guns, phones, and a plan. I’ve tried it, and it is hard to hold your gun and dial your phone at the same time. Use your resources. You have a phone, so take a picture of the strange car in your driveway. Have your friends call the police while you watch your robbers. Conversely, maybe your friends are armed and you can make the 911 call. Take a picture of the criminals if you can do so safely. You don’t know if they are armed and you don’t want to get close enough to find out. Leave that to the police. (Remember that one of the robbers in this story was wanted on drug and weapons charges.)

Suppose the bad guys ran away. If you touch your gun, then you want to call 911 and file a report. Plan on calling your lawyer as well, even if there were no shots fired.

Here is another important lesson; holding someone at gunpoint is extremely dangerous. It gets more dangerous every second we do it. We see security videos of armed store clerks who chase away a robber. After the robber runs out of the store, the clerk unintentionally shoots the floor. Adrenaline made the clerk’s hands go numb. The clerk grabbed the gun tighter so it felt secure in his hands. If you have poor trigger discipline, then you have a negligent discharge.. or worse.

Keep your gun pointed down and keep your finger off the trigger until you’ve made the decision to shoot and your sights are on the target.

We used to say that you should only present your firearm if you need to shoot. Most states recognize that having a drawn firearm gives you more time to not shoot someone. That is certainly true in your home. The law of self-defense changes as we move from inside our home, onto our property outside our home, and to being in public. Talk to your concealed carry instructor or to a lawyer who practices self-defense law in your area. They can help you understand when you are allowed to present your firearm, and when you have to press the trigger.

You studied self-defense so you know what to say to the police. That might not be true of your friends who are making the 911 call for you. Give the 911 operator your address and state the nature of your call. Stay in touch with the dispatcher so you know when the police will arrive. Tell them what the good guys look like and what the bad guys look like. Have one of your friends guide the police to you. You want to holster your firearm so you don’t have a gun in your hands when the police see you.

Now you follow the officer’s instructions. They don’t know who belongs where but they are good a figuring it out. Another reason to have your concealed carry license is that it shows you are a card-carrying good guy and have no disqualifying criminal history. Also, you have a holster, and good guys carry their guns in their holster. The police may, or may not, want to take possession of your firearm during their investigation. Follow their instructions.

Make a simple statement to the police and tell them you will say more after you’ve spoken with your lawyer. Ask your friends to file a written report as well. Then, call your lawyer so he files a complete report. Plan to do so every time you touch your gun even if you don’t draw or press the trigger. Thousands of us do so every day.