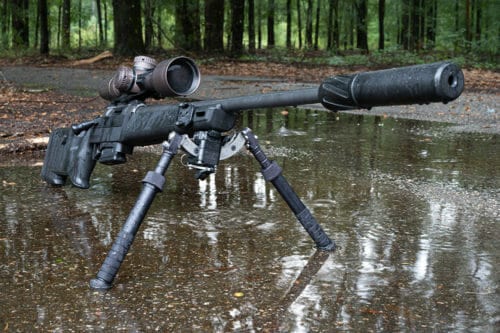 U.S.A. -(AmmoLand.com)- When Daniel Defense announced the introduction of the Delta 5 Rifle, my first question was why?

It’s like hearing that Ferrari is getting into pickup trucks. Doesn’t mean they won’t make a great one, but it’s not exactly their core market. Don’t get me wrong, all the marketing material, glamor shots, and massive billboard ads at SHOT Show 2020 definitely got me salivating, but there are plenty of great, established bolt-action rifle designs on the market.

Which begs the question, why would a shooter take a chance on an unproven design when there are dozens of designs with decades of performance?

Indeed, the Daniel Defense Delta 5 will have to beat out several designs with decades of experience and proven track records of reliability under combat conditions if it wants to be successful in the civilian market. So, does it? We stretch the Delta 5’s legs and find out.

The Daniel Defense Delta 5 is a magazine-fed, bolt-action precision rifle available in both .308 Win and 6.5 Creedmoor. The .308 version sports a 20in barrel, while the 6.5cm rocks a 24in one. For the review, we tested the 6.5cm model. All versions of the gun feed from detachable, single-column AICS magazines and ship with a single 5-round polymer Magpul example in the box.

As for features, the Delta 5 is slam-packed with so many that it would be very easy to miss some if mentioned or laid out a la carte. So, we’ll start at the stock and move our way forward.

The Daniel Defense Delta 5 ships with an injection-molded, high-strength polymer stock. At the rear, it includes a length of pull adjustable buttpad that uses spacers, and a tension-secured adjustable comb to allow shooters to get behind their favorite optic no matter how large it is.

But the rifle itself doesn’t just sit inside the stock. It actually resides in a small aluminum, two-piece mini-chassis which allows the action to be clamped into the stock securely without the need for traditional bedding of the rifle. This combined with the rigid material used in the stock’s construction ensures the barrel is perfectly free-floated for maximum consistency/accuracy.

Above this, the bolt itself is a three-lug, push-feed design with a short, 60-degree throw. This is an ideal combination of features for strength and rapid operation. Beneath this, the magazine well is cut for AICS-pattern magazines, and the gun features a slightly over-sized ambidextrous paddle release for quick magazine changes.

Above all that, the Delta 5 ships with a 20 MOA Picatinny optics rail that is secured directly to the recoil lugs to ensure that it never rattles loose even with powerful magnum chamberings potentially available in the future. This rail is also ideal for the Delta 5’s role as a long-range, precision weapon, as it affords the shooter extra elevation adjustments for those really long-range shots.

Forward is the heart of any precision weapon – the barrel. And Daniel Defense didn’t skimp on it at all. The Delta 5 has a hammer-forged barrel built by Daniel Defense themselves, and it ships threaded from the factory to standard 5/8x24in. The 6.5 Creedmoor model tested has a 24in barrel, but the 308 model includes a slightly shorter 20in barrel.

Under the barrel, the Delta-5 includes three strips of M-Lok slots at the three, six, and nine o’clock positions.

Since the Delta 5 is supposed to not only be a precision rifle but one capable of hard field use under a variety of conditions, I wasn’t content to just punch paper from a bench. So instead, I ventured out to a friend’s property in sunny South Carolina and we set up some steel targets at various distances ranging from 200 to 750 yards. For glass, Vortex loaned me a Vortex HD Razor Gen 2 Rifle Scope so I could get enough magnification and clarity to maximize the Delta 5’s potential.

Additionally,  I utilized an Atlas bipod from Accu-Shot mounted on a Magpul polymer M-Lok Picatinny rail segment.  This is an extremely durable, well-made bipod that even huskier shooters can feel comfortable doing push-ups on – yeah, it’s really that sturdy.

Throughout the test, the Delta 5 never failed to be capable of hitting five-inch steel swingers provided the shooter did their part, while engaging man-sized targets out to 750 yards was fairly effortless. In fact, I’d argue that every miss was shooter-error. Because of COVID, this shooter hasn’t been able to do much long-range shooting in a long time.

But since this is a precision weapon, so it’s equally important to test it at a known distance under conditions that are as controlled as possible. So before I headed out to the farm to shoot at long range, I tested the gun at 100 yards with three different loads of 6.5 Creedmoor. Normally, I like to do three sets of five-round groups, but given the sky-high price and limited availability of ammo at the moment, I decided to just do a single five-round group for each after the gun was zeroed and allowed to cool for five minutes.

The results were very impressive, with the Delta 5 achieving groups slightly above half MOA, or half an inch at 100 yards. But given Daniel Defense’s history of making quality, accurate firearms, this should come as no surprise.

From the previous paragraph, it’s obvious the Delta 5 is capable of incredible feats of accuracy, but there is more to the gun than that. So let’s dig in.

Personally, I really enjoyed the stock’s adjustable length of pull and the adjustable comb. The stock itself felt durable, rigid, and all-around well-made. That said, I wasn’t a huge fan of the pistol grip palm swell, though this isn’t something that Daniel Defense screwed up, just a personal preference for guys like me with small-to-medium-sized (schmedium?) hands. That said, I was still able to get behind the rifle comfortably, and engage targets with ease.

Another minor qualm I had with the gun was the bolt design philosophy – It’s a push-feed design. Most people don’t care either way, but if I was going to build a gun designed for a TEOTWAWKI scenario, it would be a control-fed design. For the uninitiated, the difference is that control-feed bolts retain the cartridge until pulled all the way back, where push-feed simply slides the round from the magazine, up the feed ramp, and into the chamber.

When everything works, the difference between the two is academic. The problem that can occur is when a shooter is hastily working the bolt it’s possible to double-feed the gun and cause it to malfunction. That said, I never encountered any reliability issues stemming from the bolt, so make your own decision.

Speaking of reliability, there was one odd issue with the gun when I received it. Occasionally, the supplied magazine would fail to sit high enough for the bolt to strip a round from it. I confirmed that it was a magazine issue by testing a different capacity AICS-pattern Magpul magazine in the same gun with the same ammo and encountered no issues whatsoever. That said, the gun tested was a review/loaner gun from Daniel Defense. So I’m definitely not the first one to run it hard, probably more like the 15th. So it’s certainly possible that a previous reviewer at some point man-handled the magazine or damaged it in some way.

So, what’s the verdict?