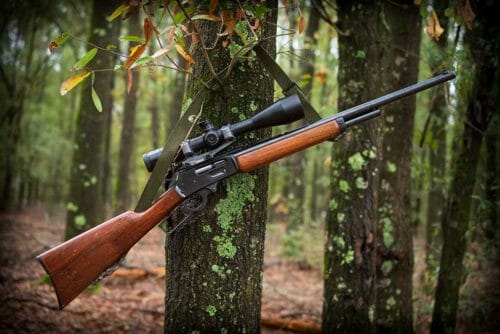 U.S.A. -(AmmoLand.com)- Last year I was inspired to ditch my AR-15 for a Marlin 1895. See, I shot a mid-sized doe with an AR-15 firing a supersonic 300blk round designed specifically for that purpose; Problem is, even with a broadside angle on the deer and shot placement behind the shoulders, the doe still managed to run 60 yards before expiring.

To be honest, I felt sick. The last thing any ethical hunter wants to do is let his prey suffer. So I decided then and there, that I’d never shoot whitetail deer with anything smaller than a .308 win. But since I’m primarily a tactical and competitive shooter, the majority of the 30-caliber weapons are precision rifles equipped with suppressors. This heft and bulk make them wholly unsuited to SC Low Country hunting, where lightweight, handy rifles rule the day because sightlines are limited to around 100 yards.

So I dug through all of my gun safes and pulled out an old favorite I had bought at a pawn shop a few years prior – a Marlin 1895 lever-action rifle chambered in the hard-hitting .45-70 Gov round. I figured the combination of massive size, and impressive ballistic energy would make short work out of anything on four legs in the South East. But I ran into another problem. The previous owner had installed an old school Weaver scope mount, and my eyesight is too crappy to confidently hunt without glass. That’s when I sent off an order to the folks at Midwest Industries.

The Midwest Industries 1895 rail is very simple but rock-solid. Basically, it’s just a Picatinny rail segment with a slight curve to the bottom of it with four holes in it. These holes are for securing the rail to the Marlin 1895’s receiver with the included hex screws and hex wrench.

But I’m sure you’re thinking, “so what, who cares it’s just a Pic rail!” Fair enough, but the engineers at Midwest really had to know their stuff, since many Marlin shooters load very high-pressure 45-70 loads like the Hornady 325gr FTX I prefer. This round offers unbelievable ballistic performance and incredible expansion – fully dumping the majority of the round’s 4,000 plus joules of energy into the target. For white rail, it is honestly overkill. But shooters who want a round that can also take elk or mule dear at mid-range would also be well-served by it.

But I’m straying off topic slightly simpy to demonstrate how incredibly powerful the round is, and consequently how robust the Marlin mount must be to hold up to punishing recoil impulse. One thing to note is that if you have no intention of removing the mount, I would advise shooters to use permanent Loctite on their Marlin 1895 to ensure the rail never shakes loose during a hunt. For me, I wanted to see if it would hold up without thread-locking adhesive.

The result? Initially, I only torqued the screws until I felt moderate resistance and then turned them another half turn. But that proved inadequate as after 4 rounds fired the mount was rattling on the gun. So for the second test, I tightened these screws to one step beneath what I consider, “gorilla tight”. Or the approximate torque an enraged gorilla would put on the wrench in a fury. Don’t go that hard, but I would recommend just putting as much force as you can on the included wrench. Don’t utilize anything else to give you better leverage, as I’m sure you’ll likely strip the screws or the threaded holes.

Since today is actually the last day of hunting season, I limited testing of the mount to 40 rounds of cowboy load .45-70 and 20 rounds of the massively powerful 325 FTX rounds. I would have done more, but with the insanity of ammo prices right now, each one of those rounds will cost me $3 to replace!

Bank account damage notwithstanding, I loaded up the Marlin with a Nikon BlackForce optic in a pair of quality Warne rings and mounted to the rail, and after the initial 40 rounds fired I saw no shift in zero or any visible play in the mount. Confident in the mounting job I did, I loaded up the artillery rounds from Hornady and knocked over every steel target on my gun range out to 150 yards. The Midwest Industries Marlin 1895 rail held up flawlessly!

Overall, the Midwest Industries Marlin 1895 Picatinny optics rail is a very solid investment for shooters looking to stretch the legs of their Marlin lever-gun by adding optics. Especially those who have their guns chambered in the hard-hitting 45-70 round and want to be absolutely sure of their zero before heading out into the bush.