Media and Washington Team Up To Deplatform Trump Supporters ~ VIDEO 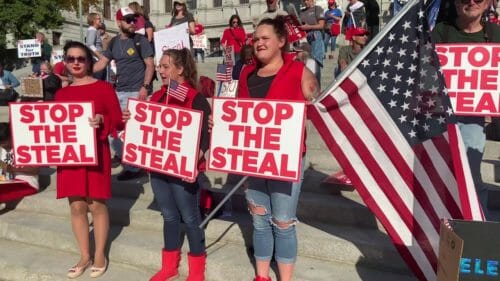 Washington, D.C. –-(Ammoland.com)- The historic Harrington Hotel in the District of Columbia [DC] will close during a planned massive pro-Trump rally in a bid to deny access to the city by those planning to protest the election results.

On January 6th, 2021, Trump supporters plan to descend on the capital city to protest the stolen presidential election results’ certification peacefully. They claim that Biden won the election due to massive widespread fraud. The protestors point investigations by James O’Keefe and Project Veritas that show left-wing ballot harvesting efforts. They also point to the mathematical discrepancy that the statisticians can’t easily explain away. They also claim that states broke their election laws to help Biden win and points to big tech interfering in the election process.

The city has been hostile towards the protestors. The Mayor is an outspoken critic of Donald Trump and is an admitted leftist.

City media such as the Washington Post have attacked venues used by the pro-Trump proud boys. The post stories pressured the Harrington Hotel to shut down and cancel reservations of people planning to attend the January protest. Other media outlets in the city jumped on board in attacking the hotel.

Harry’s Pub will also shut down during the protest. The bar has been a meeting point for Trump supporters in the past, and the mainstream media noticed that conservatives like to frequent the establishment. The Washington Post once again applied pressure on the business to shut down during the planned protest. There seems to be a concerted effort by the city and mainstream media against the pro-Trump protestors.

The primary protest is organized by “Women for America First,” and it is scheduled for noon to 5 PM at Freedom Plaza. The group is expecting that the rally will draw over 5000 people. President Trump said the protest would be “wild,” and left-wing pundits have insinuated that the phrasing the president used was some type of dog whistle to groups like the Proud Boys.

The Proud Boys plan on attending the protest but will be without their trademark Fred Perry polo shirts. The media have tried to tie the group to white nationalists despite the fact that the group is open to any race. The group’s leader, Enrique Tarrio, is Afro-Cuban and would be an odd pick to lead a white nationalist group.

Two groups that plan on being in DC to counter the protestors are Black Lives Matter and Antifa. Antifa and left-wing violence are on an upswing across the country since the death of George Floyd. In Seattle, an Antifa member shot and killed a Trump supporter in an unprovoked attack. On December 12th, Antifa members stabbed four Trump supporters in front of Harry’s Pub.

Over the summer, Antifa protestors took over parts of Portland and Seattle and demanded extortion payments from local businesses. Antifa “security” has been responsible for multiple shootings, including the death of an unarmed black teenager in Portland.

At the same time, BLM protestors have burst into restaurants and demanded patrons raise their fists in solidarity. They intimated anyone that wouldn’t comply with their demands. Continuing to terrorize America BLM protestors have attacked and beaten Trump supporters and caused billions in damages across the country. The trained Marxist are using Stalin’s tactics when dealing with critics.

Mainstream media totes the line that right-wing protestors instigated the attacks on them because they were present. If the journalist were to report the attacks’ actual facts, left-wing groups would try to end their careers because “they are racist.” No reporters want to be called racist.

This reasoning lines up with Antifa’s twisted philosophy. The group considers any idea that goes against their core beliefs as the same as a physical attack. They claim that their shootings and stabbings are “self-defense” against ideas they find objectionable.

One thing is for sure. The January 6th protest will be a “wild” affair.

The post Media and Washington Team Up To Deplatform Trump Supporters ~ VIDEO appeared first on AmmoLand.com.