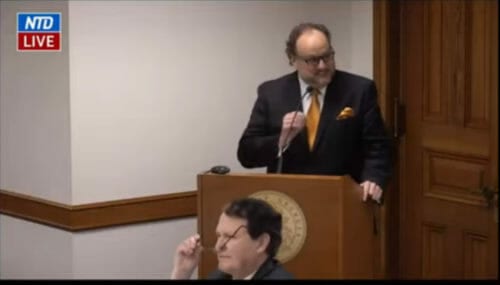 U.S.A. –-(AmmoLand.com)- On 30 December 2020, Jovan Hutton Pulitzer gave a presentation to the Georgia State Senate Judiciary Subcommittee, on how he and his company can detect many types of election fraud with a simple, easy examination of the physical ballots, by running them through forensic machines designed to detect physical signatures of the ballots. Pulitzer is a pattern recognition expert holding over 200 patents. His patents are used on 12 billion handheld devices around the world.

They would not be looking at handwritten signatures. Those are not on the ballots. The would-be detecting physical signatures of folding, printing, marking and codes that exist on the paper used for the ballot.  Every physical process done to a ballot leaves marks. Those minuscule marks, often invisible to the human eye, are the physical signatures Mr. Pulitzer is talking about.

This physical forensic audit of the paper ballots completely circumvents the election software. From a comment on freerepublic.com:

Sorry if I’m repeating something…

His method is to examine the folds on the paper ballot.

These ballots were folded by machine, and each valid one
was folded identically.

He can run the ballots through a device, and it will spit out
the ballots that weren’t folded by an official machine.

If they slipped fake ballots in, his system will pick it
up at once.

He claims his process can tell you, with 100% accuracy:

One of the slides in Mr. Pulitzer’s presentation shows a quote from a Fulton County Election official, saying 106,000 of 113,130  votes were adjudicated, an astounding 93.67% adjudication rate. Pulitzer says that the high adjudication rate shows the machines were not working as they should. This shows similarities with high adjudication rates in Michigan and Nevada, and potentially in Arizona and Wisconsin.

He claims his process can do the forensic analysis quickly and cheaply, for all paper ballots.

Mr. Pulitizer has volunteered to do the forensic evaluation of the paper ballots for free. He has donated his time, expertise, equipment, and company assets.

He says he does not care who wins. He simply wants to ensure an accurate count is made, so this never happens again.

He says, without faith in the election process, we do not have a country.

While Jovan Hutton Pulitzer was giving his testimony to the subcommittee, more information came in. Voting was ongoing in the runoff elections for Senators in Georgia. There is a Twitter video of what Pulitzer had to report.

Twitter link about ability to hack into the Georgia machines live.

“At this very moment at a polling location in the county, *NOT ONLY* do we now have access through the devices to the POLL PAD, to the system, but *WE ARE IN.*”

Here is a partial transcript of what Pulitzer reported at that time:

“At this very moment, at a polling locating in the County, not only do we now have access to the devices, to the poll pad, the system, but we are in.  And it is not supposed to have wifi, and that is not supposed to be able to happen, So we’ve documented now, its communicating two ways, in real time,  mean it is receiving data and sending data, should never happen, shouldn’t be wifi, we’ve now documented it in real time, so we can shut down the data. But that is going on right there where everyone is voting. And, I just wanted to get it into the record.”

The subcommittee was impressed with Mr. Pulitzer’s testimony. They voted to request that the Fulton County Board of elections allow examination of the paper ballots. This is a transcript of the request/resolution of the subcommittee:

The vote was unanimous and affirmative.

The methods portrayed by Mr. Pulitzer are convincing. They offer a simple way to detect several different kinds of election tampering. They are not absolute. They would not detect, for example, double voting with fraudulently obtained ballots, phantom voting, or voting by illegal voters. However, they would do much to restore confidence in the election process.

Will the Fulton County Board of Elections fight this attempt to show transparency in the election process?

If past history is any indicator, they will lawyer up create legal excuses not to allow the examination. Not allowing the examination makes them appear to be guilty. They do not seem to care.