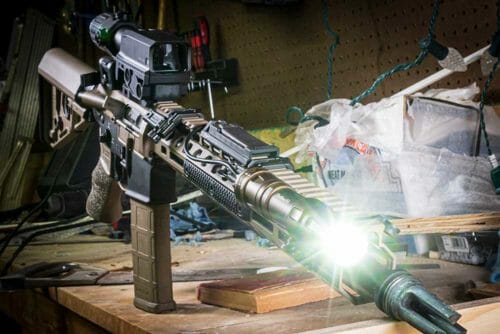 The Olight Odin Mini Mounted on a LaRue Tactical Ultimate Upper AR-15. IMG Jim GrantU.S.A. -(AmmoLand.com)- In the past few years, the tactical weapon light market has seen a deluge of companies and products flooding the market, like the Olight Odin Mini. And with the market so saturated with new-comers, for a company’s product to really shine, it must differentiate itself from the competition in a meaningful way. Whether that’s pricepoint, features or durability, the fact remains that producing an, “OK” weapon light just won’t cut it anymore.

So did Olight produce a light that ticks of enough of these boxes to make their new Odin Mini stand out? Let’s take a closer look at the Olight Odin Mini, and find out.

To be honest, I’m a little skeptical when it comes to Olight and the durability of its products. While I’m sure I’ll be labeled as xenophobic or some other nonsense by some intellectually dishonest ne’er do wells, my experience in the past with new-production Chinese weapon components did not inspire confidence. AK optics mounts that never held zero, handguards that should be drop-in requiring fitting, or components just simply breaking after normal use – in a word, junk.

This isn’t to say that all Chinese-made components aren’t well-made or high-quality. Rather that because most companies that outsource their products to China do so to save money, these products tend to be literally cheaply made.

But does the Odin Mini buck this trend? From my experience thus far, absolutely.

First off, there is nothing, ‘cheap’ about the Olight Odin Mini. From its durable anodized aluminum construction to the included mounting optics and tape switch, the Mini seems to be well-made and deliberately designed for use on a firearm.

For starters, the Olight Odin Mini ships with the following components.

Let’s go down the list of features and get the full details of everything included in the box.

The light itself is built from durable anodized aluminum and is available in black, gunmetal gray, and FDE. It features an LED emitter capable of producing 1,250 lumens at 14,400 candelas with a runtime of six minutes plus 11 plus 39 plus 14 minutes. Which is to say, the light starts off at 1,250 lumens and runs at that intensity for six minutes before stepping down to 900 lumens then 700, and finally 200 lumens. According to the Olight website, this is done to prevent the light from overheating but is a fairly big limitation for shooters expending steady performance over a long period of time.

That said, even 700 lumens is plenty of light for nighttime use, which means shooters will have just shy of an hour of use at full power with the bean dropping down in intensity during that hour. Personally not a big limitation for my uses, which would be property patrol and home defense, but law enforcement may want to stick to other designs. Though I would easily take this statement back if there was a way to toggle intentionally to the 700-lumen setting and leave it there.

The light itself is powered by an included rechargeable 18500 lithium battery that is charged by the included magnetic USB charger. Simply attach the charger to a USB device, and the back of the Odin Mini with the battery inside the light to charge. From empty, the Odin Mini takes about 3 hours to fully charge, and the charger’s LED changes from red to green to indicate when charging is complete.

One unexpected inclusion with the Odin Mini is the offset M-Lok quick-detach mount. The light itself features a bone-shaped extrusion on the bottom which locks into a camming QD mount which secures itself to a handguard VIA an M-Lok interface. To secure it, a shooter slides the extrusion into the narrow channel on the mount, then turns a camming knob 90 degrees. This engages some ball-bearings and a steel recoil bar that prevents the light from shifting during firing.

Behind all this, the Odin uses a magnetic tail cap that interfaces with a tape switch endcap that locks into place with three ball bearings. While seemingly fragile and overly complex, in practice it holds up fine and makes for very quick assembly and disassembly for charging.

Speaking of which, the Odin can be left on the charger indefinitely with no ill effect. The system is designed to not shorten the battery’s lifespan even if left charging for long durations of time. Plus, this means the shooter has the option of either detaching the light for charging or leaving it on the gun to have the entire home defense setup ready at a moment’s notice.

Due to limited ammunition availability, I was only able to run about 80 rounds through the host gun with the Olight Odin Mini attached. But in that time, the light never shut off during firing or came loose from its mount. Additionally, due to my man-handling and clumsy nature, it was dropped on concrete floors, wooden floors, and dirt multiple times during testing and it never affected the light’s functionality. In fact, I accidentally got some fine sand in the tail cap and this didn’t affect the light’s ability to charge to function with the tape switch installed.

As mentioned previously, I wasn’t expecting much from the Olight Odin Mini, but after playing with the light for several days, I’m wholly impressed. Between the performance and all the included extras and features, it seems to be an excellent light for the price – around $130. That said, I don’t like the automatic dimming feature and wish it allowed shooters to manually set the brightness level to allow more consistent performance over the course of the battery’s life.

Still, with similar performance to SureFire lights but at a fraction of the cost, the Odin Mini is an excellent deal for shooters in need of weapon-mounted illumination who don’t have a couple of hundred dollars to spend.