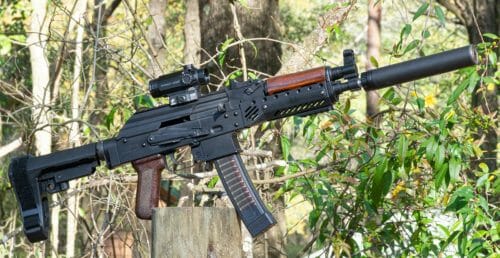 U.S.A. –-(Ammoland.com)-I love the PSA AKV because it reminds me of the Vityaz and the PP-19 Bizon. Both 9mm versions of the AKM. The allure of a 9mm AK is tough to nail down. Objectively, it’s less effective and versatile than a standard 7.62x39mm version, and yet, it’s endearing for several reasons.

Light recoil, inexpensive ammunition, and Spetsnaz cool-factor chief among them. The problem with both of these guns is that they are essentially unobtainable in the United States. A few companies have come along and offered their own take on the 9mm AK. But it wasn’t until PSA released their AKV that the cost and cost of ownership of a 9mm AK hit blue-collar prices.

And while the PSA AKV ships in a very usable condition, shooters willing to spend a little extra cash can elevate their AKV from partisan to glorious pseudo-Soviet plinker. With that said, here are the top five upgrades for the PSA AKV 9mm pistol.

I’m sure more than a few readers are going to tell me that I should have gone with a Zenitco handguard over the Manticore, but I wholeheartedly disagree. Brace yourselves for an unpopular opinion ahead: Zenitco rails are needlessly heavy, poorly engineered and overly expensive.

Yes, Spetsnaz guys love them, but they also don’t have many other options. Plus, they pay drastically lower prices on these handguards over in Mother Russia. For shooters who want a similar look, but with reduced weight/cost and with better versatility, nothing beats the Manticore Transformer rail.

Alternatively, Manticore also offers grip panels that fit these slots for shooters who just want better purchase on the gun. These panels are available in three different patterns and multiple colors. So you’ll be able to dress up your AK however you’d like. For more information, visit www.manticorearms.com .

This upgrade is purely subjective, but since I run them on nearly every AK I own, I wanted to include it on the list. Full disclosure, this is entirely optional; many shooters will find the bakelite grip too smooth or too small. But for shooters with smaller hands, and those who learned to shoot AK’s on surplus rifles like the WASR or SAR-1, these grips are familiar as a favorite worn-out hat.

These bakelite grips are standard AKM-pattern, meaning they feature molded cross-checkering for added grip and a small pommel at the bottom. The later being used like the name implies, to prevent the grip from slipping from a shooter’s hand. To me, and many other AK enthusiasts, without this grip a gun just doesn’t, “feel” like an AK.

Here’s the best part about these grips – they’re incredibly cheap. Thrifty shooters can find them online at various sites for under $15. Sure, they might not be for everyone, but at around 12 bucks, why not give it a try?

If you’re going to run a large format pistol like the AKV or a tiny AR-15, you need a brace if you want to retain any of the versatility of the carbine big brother. Yes, it’s possible to run a single-point sling with success, but with only a fraction of the controllability of a brace.

And as far as braces go, none are as versatile or ergonomic as the SBA3 brace from SB Tactical. Featuring a five-position buffer tube, the SBA3 can be adjusted to fit shooters of virtually all sizes.

Plus, its combination of soft polymer arm straps and rigid polymer frame make the SBA3 virtually as durable as a mil-spec M4 stock while still being as comfortable as the original pistol stabilizing brace from SB Tactical.

So effective is the brace, that I would discourage anyone from buying an AKV without either a brace, or a stock if in carbine configuration. It just makes the gun infinitely more comfortable, controllable and usable. The good news is, the overwhelming majority of AKV pistols sold by PSA ship with the SBA3 installed. But for anyone out there who owns one absent a brace, the SBA3 is a crucial upgrade to the pistol. For more information, visit www.palmettostatearmory.com and www.sb-tactical.com/.

Having run every type of magazine currently available for the AKV, I’ve come to the conclusion that there are two magazines available currently that are totally worth every penny. The first is made by PSA themselves, and the second by Prepper Gun Shop.

Both of these magazines feature the single more important aspect of quality AK-style magazines: steel feed lips. Just like the gold standard of AK magazines, the Bulgarian waffle-pattern 30-rounders, both the PGS and PSA magazines incorporate steel feed lips and a steel collar.

What differentiates PGS magazines from PSAs, is their translucent polymer construction. While just as durable (in my personal testing/experience) as those from PSA, they offer instant ammo checks at a glance thanks to their semi-transparent polymer bodies.

Additional features include molded capacity marks at the 12, 24 and 32 round marks, as well as oversized baseplates for ease of maintenance and disassembly. These magazines are available in either transparent or translucent smoke color. And despite featuring extra steel reinforcements, they are only around $15 apiece. Lastly, if a shooter is torn whether to buy these or PSA brand magazines, I can attest that both are excellent, and given how cheap they are, “¿Por que no los dos?” For more information, visit www.preppergunshop.com.

One of my favorite suppressor manufacturers is Innovative Arms. Located in Lexington, South Carolina, this palmetto-state can maker offers dozens of quality cans as prices that won’t have shooters eating ramen noodles for a month to make ends meet.

The LEX is a prime example of this market philosophy. Retailing for $599, the LEX is fully user-serviceable and can utilize either a fixed spacer or booster for use on standard handguns. Pistons for the LEX are available in 1/2×28, 13.5x1LH, 1/2×36 and 5/8×24. The last one is especially important because the LEX can be used on carbines and pistols chambered in .300blk so long as subsonic ammunition is utilized.

The LEX is a very well made can and full-auto rated. And if you’re wondering how full auto-rated it is, I can attest that at the very least, it can handle 200 rounds of 9mm fired at 1,000 round per minute from an M-11/9 submachinegun. Not even Jerry Miculek can pull a trigger that fast! (probably)

Additionally, the LEX has an excellent 100% lifetime warranty. And they even fixed one issue that a shooting buddy and I had that ended up being our fault – free of charge! And since the can in question is owned by my friend and not me, you know we didn’t get special treatment. Overall, the LEX is just a solid pistol-caliber can at a reasonable price backed up by a solid warranty. What else could a shooter ask for? For more information, visit www.innovativearms.com/.

The PA ACSS Cyclops is an odd duck. It’s a prismatic scope but is unmagnified like a reflex sight. It even features the excellent ACSS reticle found on their magnified optics, but again, without magnification. When I first received the Cyclops I really struggled to find a role that it would excel in that one of my other scopes didn’t already fill.

This all changed when I mounted it on the PSA AKV. I noticed that the special ACSS horseshoe reticle offers the perfect combination of speed and precision. The horseshoe shape itself is massive by comparison to the BDC subtensions beneath it.

This allows shooters to use the donut itself as an over-sized red dot for CQB situations, and the inner chevron for precision shots. What’s really fascinating, is that the horseshoe/donut shape is not just made up, it’s designed specifically for use on moving targets averaging 8.9 mph or running speed. I could write pages on the 200 IQ, galaxy-brain math involved in the reticle’s design, but suffice to say, it’s incredibly versatile and well-thought-out, without being cluttered or confusing. (Plus with the addition of a magnifier, the Cyclops becomes a budget combat carbine sight!)

For our purposes, the scope’s design itself is the main attraction. In the worlds of the engineers at Primary Arms, their ACSS Cyclops reticle is like an analog red dot. So if the unit somehow loses power, it will still function albeit with a black reticle instead of a red illuminated one. And since that is the case, it means shooters with astigmatism can still utilize the optic. One thing of note, however, since it is a prismatic scope without magnification there is one special consideration. Shooters need to carefully adjust the diopter at the rear of the optic or they will get a slight fisheye effect similar to trying on a pair of prescription glasses that are a little too strong. The ACSS Cyclops retails for around $250 and is available over at www.PrimaryArms.com.

Some of these accessories are a little on the pricey side, and shooters might not want to invest in all of them at once. The good news, is that the PSA AKV is a very capable little gun straight from the factory, that in my experience has thus far been totally reliable. While I’ve only had the chance to fire around 800 rounds through mine so far, it has been totally reliable.

Jim is a freelance writer, editor and videographer for dozens of publications who loves anything and everything guns. While partial to modern military firearms and their civilian counterparts, he holds a special place in his heart for the greatest battle implement ever devised and other WW2 rifles. When he’s not reviewing guns or shooting for fun and competition, Jim can be found hiking and hunting with his wife Kimberly, and their dog Peanut in the South Carolina Lowcountry.