LaRue Tactical Ultimate Upper Kit Review – One Kit to LaRue Them All? ~ VIDEO 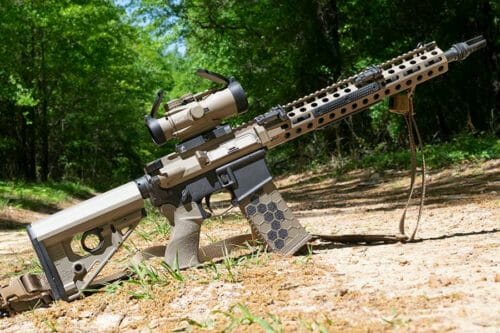 U.S.A. -(AmmoLand.com)- When it comes to AR-15 rifle lowers, I have a problem. It’s a problem that led me to LaRue Tactical – I own far more lowers than uppers, to the point where many of them simply sit on a shelf in the gun safe and look pretty. I’m especially guilty of buying meme lowers from PSA or even just blemished ones when I’m around their brick and mortar stores.

Eventually, I got sick of accumulating so many without an upper on them and began my long journey of building all sorts of firearms from them. Full-size rifles, super short pistols and everything in between – I love them all. But to be honest, I didn’t spend the extra cash to buy the really fine components most of the time. After all, if I’m building a seven inch barreled .223 AR, do I really need the most Gucci-tier handguard and high-end optic? Probably not.

Don’t get me wrong, bargain-priced parts from trusted manufacturers are still solid. But after the firearms equivalent of eating frozen dinners for so long, I started craving something fancier, more refined. Not Michelin Star quality, but maybe something between Ruth Chris and Applebees.

I had my eye on a couple of different brands. Daniel Defense, LMT, LWRC, and LaRue Tactical topped that list, but they all had some downside to them: price. The cheapest offerings from any of these companies were still well over $1,000. While not necessarily an unfair price, it’s still more expensive than 90% of gun-owners would be willing to spend.

Somewhat discouraged, I relegated myself to waiting for a smoking Black Friday sale or maybe someone locally selling an upper used for a more reasonable price.

A few years passed, and while attending a smaller shooting event in Florida, I had a chance to meet Mark LaRue in person. He was showing off his SUURG upper and newly-released .224 Valkyrie caliber upper. I got some trigger time behind both and was thoroughly impressed. I mentioned to Mark that his guns were awesome, but out of the financial reach of most shooters.

He replied, “Just buy a kit, it’s cheaper.” In a sudden flash of brilliance, I uttered, “A what?”

Mark explained that LaRue offers an AR parts kit they call, the Ultimate Upper Kit. It includes everything a shooter needs to build a functional rifle except the stripped lower receiver. This includes their awesome MBT trigger, monolithic rail, unique stock, and ultra-precise barrel.

I assumed when Mark said cheaper, he meant by a few bucks. But the difference is substantial.

The majority of LaRue’s rifles and carbines start at a little over $2,000. With some nearing the 4k mark. The LaRue Ultimate Upper Kit starts at $793! That’s a hell of a price difference. But surely, these guns can’t be on par with the most expensive LaRue offerings, right?

One of the assumptions most shooters have with the Ultimate Upper Kit, is that LaRue must have cut corners somewhere to lower the price so substantially. The reality is quite the opposite in my experience. The kits ship with tons of features normally reserved for $1,000 plus weapons. For example, the LaRue kit features a monolithic free-floated rail and proprietary upper receiver. These two work with any standard AR-15 lower, but lock together with four large hex screws and two steel pegs. This not only ensures perfect alignment of the rails but also that the handguard is rock-solid because it has six points of contact with the receiver.

The rails themselves are numbered to allow shooters to consistently mount accessories and optics to them. The handguard is available in several lengths and either with M-Lok or KeyMod slots. I’ve had the opportunity to try out both, and they are very well made, rock-solid, and remarkably lightweight.

Forward of the handguard, the LaRue Ultimate Upper Kit ships with LaRue’s Tranquillo brake. While I haven’t had a chance to run it with a LaRue can, the Tranquillo is designed to function as both a traditional brake and as a quick-detach mount for their suppressor. Again, I’ve not tested the suppressor, but the brake works wonders for reducing felt recoil. But boy is it ever loud! Though this makes sense, it’s a three-chamber, four-port brake.

Behind the brake and under the handguard, the Ultimate Upper Kit features a medium-contour target barrel that in testing was incredibly accurate. For the review, I requested a 14.5in barrel, and replaced the Tranquillo brake with a SilencerCo ASR flash hider and had my smith pin and weld it on. This allows me to keep the rifle short and handy, without angering the ATF. Plus, it allows a very solid mounting system for my SilencerCo Saker 762 provided by SIlencerShop.

How did it perform?

With factory ammunition, and a (very overkill) Burris XTR II 5-25x optic, I consistently achieved sub MOA groups at 200 yards. In fact, the best five-round grouping of the day measured 1.31in! Though the majority of my group hovered around the 1.7in mark. Why was I using a 25 power scope for 200-yard shots? Because my eyes aren’t great, and I wanted to minimize as much human error as possible.

Would I recommend this combination for most shooters?

No, probably not.  But it is a great combo to really see how a rifle performs at long range but is far too bulky and heavy for three-gun or hunting.

Continuing rearward, the most noticeable difference between the LaRue and mil-spec guns is the pistol grip. Resembling a target .22lr handgun grip mixed with that of an HK PSG-1, the LaRue grip looks as alien as it does uncomfortable. Strangely, not only is the grip very comfortable for both left and right-handed shooters but I have come to prefer it over nearly everything else on the market.

It seems this is because the middle of the grip offers a slight palm swell that forces a shooter’s index finger to rest the pad on the trigger itself. That, and the aggressive, but not excessive molded grip texture. It helps shooters retain weapon control when their hands are wet or oily, but doesn’t destroy a shooter’s hand like skateboard tape-style grips.

My personal favorite part of the LaRue Ultimate Upper Kit is the MBT-2S trigger system. (Well, that and the LaRue Dillo Dust. But that’s only because I’m fairly certain the folks at LaRue put something illicit in that delicious dry rub!) The MBT-3S trigger is a two-stage, 4.5lb trigger. The first stage measured 2.5lbs, and the trigger crisply breaks with an additional two pounds of force. The result is a trigger that helps shooters squeeze every ounce of performance from their rifle or carbine.

To me, this trigger is on par with offerings from Geissele Automatics and nearly on par with super high-end triggers like those from Elftman Tactical. As far as factory triggers go, it is among the best. Another interesting aspect of the MBTS-2 is that it ships in a dry-fire module that also has the grip and hammer installed. It’s a neat device that I drove my good friend Nick crazy with, while we drove home from a distant 3-gun match.

Note to readers, don’t continuously dry-fire the contraption with someone nearby. It is loud and annoying. But aside from friendship-ruining noise when mounted in a plastic housing, the MBT-2S is my favorite trigger in its price range.

Behind the trigger and grip, the Ultimate Upper Kit features a numbered received extension to making consistently deploying the telescopic stock easier. The stock itself is also a very unique aspect of the kit’s design.

LaRue calls their collapsible M4 stock, the Tactical RAT. The RAT certainly looks very different from your standard M4 or SOPMOD stock, but the differences don’t end there. The RAT features a rubberized pull ring that allows shooters to rapidly adjust the stock in the field. IF shooters turn the unlocking knob at the front of the stock, the ring can be pulled all the way back and releases the stock from the buffer extension.

Another cool feature of the RAT is that it houses an entire clearing kit inside the stock itself. To release, a shooter simply depresses a small button at the rear with a cartridge, and slide the butt pad off. It’s a very simple idea, but one that is done so cleanly that it doesn’t add needless bulk to the stock itself.

Additional features include an ambidextrous QD sling mount and two traditional loop ling cuts allowing shooters to run whatever sling they want on their LaRue rifle. All in all, it’s an excellent tactical stock that works for nearly all applications.

What’s the verdict? Is the LaRue Tactical Ultimate Upper Kit the cheapest way for a shooter to enter the realm of so-called Gucci ARs, or is it just a gimmick not worth shooter’s hard-earned cash? From my experience, it’s the former 100%. I’ve had this LaRue for a little over a year and a half now. I’ve fired around 2,000 rounds through it without any malfunctions, and the gun is just as accurate as the day I put it together. More than that, the excellent trigger and quality barrel have allowed me to snipe prairie dogs out to 250 yards, and even take a small whitetail deer with 75gr BTHP within 50 yards.

For me, this is the ideal first AR-15 for a shooter who knows they like shooting but is on the fence about buying an AR. While it’s proprietary upper might prevent them from taking full advantage of the AR15’s massive aftermarket parts selection, the quality components, excellent trigger, and top-notch barrel will allow a shooter to improve themselves without worrying about equipment holding them back.

The post LaRue Tactical Ultimate Upper Kit Review – One Kit to LaRue Them All? ~ VIDEO appeared first on AmmoLand.com.