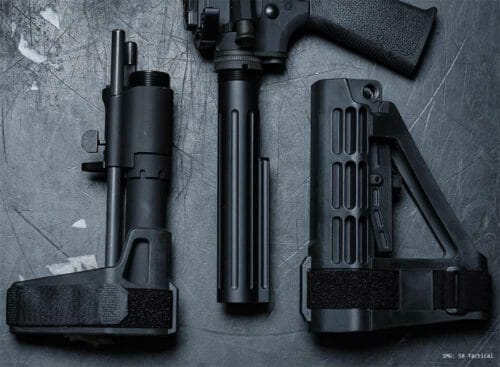 Washington, D.C. -(Ammoland.com)- After tens of thousands of comments left by gun owners over the ATF’s proposed guidance over pistol braces, the agency pulled it from the National Registry.

The agency released the proposal and gave the public two weeks to respond. Many in the gun world believed that the ATF chose to release the document right before the Christmas holiday, hoping that the gun community wouldn’t notice it until it was too late. The American people did notice. Every firearms publication ran non stop coverage of the confusing and nonsensical proposal. YouTubers of all sizes encouraged people to write comments to the government about the new guidance.

One YouTube channel that ran a marathon live stream reading submitted comments was Gunwebsites. During the live streams, the channel’s owner, Pete, gave viewers tips on submitting official comments and could see what other people wrote. He hosted panels of gun-rights advocates that discussed what to write and what not to write.

“I did it so people could see what the comments were like, a random sample of what was being posted five days into what we thought would be a rough ‘ask’ over Christmas,” Pete told AmmoLand. “If you watched, it knocked me on my ass how amazing they all were.”

“Going into it, of course, I assumed we’d find an assortment of the ‘shall not be infringed’ along with the paid-for Bloomberg ‘thanks for doing this,’ but instead, with my random sample, all I found was eloquent, well-thought-out reasoned insightful instructions to our government employees.”

Even the politicians got involved in rebuking the ATF’s power play. North Carolina Rep. Richard Hudson and 89 other Congress members signed a letter urging the ATF to reverse course on the disastrous move. Together they urged the ATF to “correct this injustice” and not infringe on American’s rights.

Every gun-rights group took the fight to the ATF.

Emails went flying out to members of Gun Owners of America, the Second Amendment Foundation, the Firearms Policy Coalition, and even the National Rifle Association. GOA and FPC fired up their legal machines to prepare to sue over the letter. For the first time in a long time, all the gun-rights groups seemed to be on the same page and presented a united front against tyranny.

“This is a great victory,” Gun Owners of America’s Senior Vice President, Erich Pratt, told AmmoLand News, “And I am thankful for all the gun owners who issued their stinging rebukes to the ATF, to the many pro-gun journalists and YouTubers who helped sound the alarm, and to the 90 members of Congress who sent an opposition letter to the ATF. Gun owners will have to stay vigilant and watch these ATF bureaucrats closely. But for now, this is a wonderful early Christmas present.”

Even companies that aren’t gun-related took to social media to encourage their customers to write comments. Defender Coffee is a coffee company that recognized the right to keep and bear arms so much so that all profits are donated to pro-gun groups. They changed the links in their social media platforms to point to the registry where customers could post their comments about the ATF’s move.

Overall it was a victory, but we can not let our guard down now.