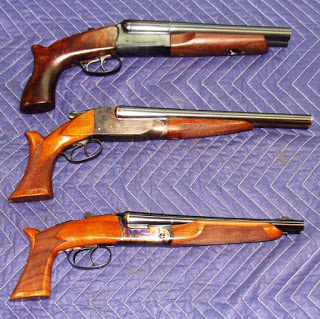 U.S.A. – -(Ammoland.com)- As gun owners react to the Bureau of Alcohol, Tobacco, Firearms and Explosives’ latest bit of mind-changing nonsense on stabilizing braces, it’s not out of line to recall some acts of capricious rulings from the past. They, too, made no sense other than to show gun owners the agency could impose whatever diktats it wanted and that we were being given no choice but to obey or be destroyed.

Did I say “agency”? That, too, became a matter of contention several years back when the “Bureau” tried to weasel out of responding to a Freedom of Information Act request.

“The ATF is not an ‘agency’ within the meaning of the F.O.I.A., 5 U.S.C. § 552 (f) (1), and is, therefore, not a proper party defendant,” Bureau mouthpieces claimed, trying to duck an action I was party to that simply sought to obtain copies of policies and rulings relied on for enforcement and determination actions. In a bit of ironic cognitive dissonance, the Acting Director at the time, Thomas Brandon, referred to the organization he headed as an agency in his executive staff profile, and significantly, ATF referred to itself as an agency in its fiscal year Congressional budget submission.

Why citizens wanting to know what the rules are even had to ask – and why that was being evaded – only becomes clear when you come to grips with the obvious: ATF knows it doesn’t have a consistent set of standards by which to apply its evaluations. And it’s not like everyone hasn’t been aware of the problem for a long time.

In 2005, the Congressional Research Service published a memorandum regarding ATF firearms testing procedures. Among other things, it revealed that the ATF has “over 300 cubic feet of classification letters stored in file cabinets.” The Bureau hasn’t scanned any of these documents into a searchable database to assure consistency of interpretation, to identify and resolve regulatory conflicts. The extent to which this inconsistency has grown and compounded in intervening years is unknown and unknowable without a major organization and review effort.

Why does the Indiana Jones warehouse come to mind?

The results of what appears to be deliberate indifference to disorganization and inconsistent or just plain loopy rulings are what we see unfolding before us today, as ATF adds even more mess to the mix. And it’s been going on for years.

Most readers here have probably heard about the “shoestring = machine gun” determination  (supposedly rescinded, but I wouldn’t count on it). Many have also recently been subjected to the “bump stock” reversal, that contradicted the sworn testimony of ATF’s own former technical expert. What was once approved is now verboten (and woe unto any citizen who runs afoul of the new rules).

I’d like to share a few lesser-known/more forgotten incidents I’ve covered in years past that are representative of the systematic overreach and ludicrous inconsistency. They define an incompetent administration that revels in power but has no idea how to effect basic management controls. I’ll ask in advance for your patience in letting some of the links load. The website two of these stories originally appeared on folded, and they are only available on the Internet Archive/Wayback Machine.

I’ll start with the photo for this article titled “NFA Absurdity in One Photo.” Per friend and firearms designer Len Savage:

The absurdities don’t end there.

ATF’s Firearms Technology Branch deemed “Chore Boy copper cleaning pads, along with fiberglass insulation,” a firearm, subject to registration and a $200 transfer tax, an official letter in response to an attorney inquiry by John R. Spencer, Chief, Firearms Technology Branch declared. It went beyond the “illegality” of using the material to replace deteriorated material in a suppressor without an approved ATF Form 1 (“Application to Make and Register a Firearm”), but also noted mere possession of an undefined supply of such pads could be construed as an illegal “stockpile.”

Speaking of suppressors, my friend and colleague, the late Mike Vanderboegh blogged about ATF approving a shroud and then classifying it a silencer, with the bureaucratic hilarity under threat of having your life destroyed that ensued. All while they tried to hide their screw-up and their correspondence on the matter from public scrutiny.

Speaking of screw-ups, my personal favorite is the conflicting classifications for SM10 and SM11A1 pistols and the SAC carbine held to machine guns. Except when they’re not:

They’re the same gun.  ATF admits it under oath.

If you put one produced before the deadline and one produced after it side by side, you would not be able to tell the difference.  They would look and function identically.  Own one without registration and you’re fine. Own the other without registration and you’re looking at serious time in the federal slammer, as well as becoming a “prohibited person”– for life. Assuming you survive the arrest. And how many of these unregistered machine guns are out there? Savage tells me he’s spoken to former employees and the former owner of the company in question estimates “approximately 50,000 were manufactured prior to the cut-off.”

Then since this article kicked off with braces, Savage tells me about a submission he sent in 2018:

“That submission was sent on October 31, 2018 (see page 1 and page 2) and it contained an AR pistol with an SBA3 brace, the one that ATF has claimed in other documents to not have received any physical sample of from the firearms industry.  To date some two-plus years later I was never answered the ATF has my sample. They do not want to give guidance they refused and waited for the ‘gotcha.’”

Still no answer at this writing…

So the ATF “solution” is to pile on more arcane, contradictory mandates that leave gun owners scratching their heads and not knowing if what they do today will result in the hammer coming down on them tomorrow – depending on which bureaucrat is doing the rule-reading.

We sure have allowed our “servants” to stray a long way from “shall not be infringed.”