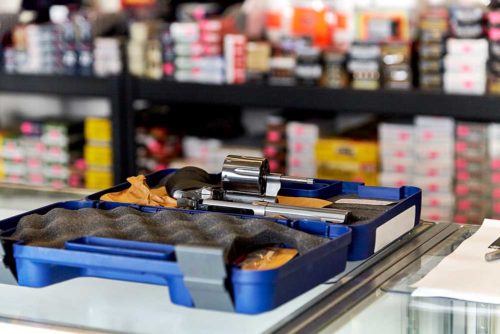 U.S.A. –-(AmmoLand.com)- A coalition of gun rights organizations including the Second Amendment Foundation and Firearms Policy Coalition, Inc. are asking a federal court in California for an injunction against enforcement of the state’s one-gun-per-month restriction on the grounds that it violates the Second Amendment.

The 43-page complaint names California Attorney General Xavier Becerra and Luis Lopez, director of the state Department of Justice, Bureau of Firearms in their official capacities as defendants. The lawsuit was filed in U.S. District Court for the Southern District of California in San Diego. The case is known as Nguyen v. Becerra.

According to SAF founder and Executive Vice President Alan Gottlieb, “California’s one-handgun-per-month purchasing restriction is an unconstitutional prohibition that will also apply to all semiautomatic centerfire rifles starting in July. The policy discriminates against private citizens because it does not apply to motion picture, television or video production companies, which we call the ‘Hollywood exemption.’ The way Becerra and Lopez enforce the law amounts to an infringement on the individual right to keep and bear arms under the Second Amendment, and a violation of the 14th Amendment’s equal protection clause.”

Under the law, there are exceptions to the limitation:

As noted in the lawsuit, “No legitimate—much less compelling—state interest exists in establishing this arbitrarily disparate treatment.”

Gottlieb said the law shouldn’t exist in the first place.

By no small coincidence, the one-gun-per-month limit in California is a restriction incoming President-elect Joe Biden wants to impose nationwide as part of his gun control scheme. How successful he will be may largely depend upon the outcome of the runoff elections in Georgia to fill two U.S. Senate seats. Incumbent Republicans David Perdue and Kelly Loeffler are being challenged by far-left Democrats Jon Ossoff and Raphael Warnock. Biden is appearing in an advertisement explaining how he “needs” both men to win.

A few days ago, firearms attorney and author Ryan Cleckner wrote an Op-Ed in The Federalist, identifying six possible moves Biden will make regarding firearms.

This new California lawsuit is one of several challenging the very kinds of gun control laws advocated by Biden, Vice President-elect (and former California Attorney General) Kamala Harris and the far-left wing of the Democrat party. In recent weeks, SAF and FPC have filed two other legal actions challenging Golden State gun laws. Read about them here and here.

If the lawsuit against the one-gun-per-month restriction is successful, it could lead to the end of such laws in other parts of the country, most notably Virginia, where Democrats quickly reinstated it earlier this year when they took control of the General Assembly in Richmond.