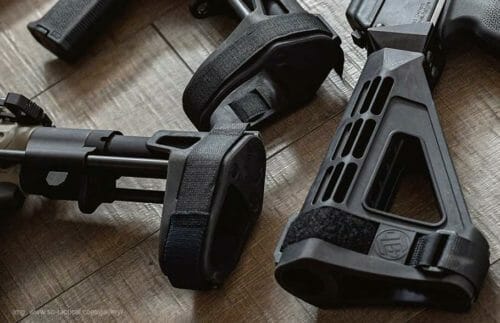 U.S.A. – -(Ammoland.com)- “ATF recognizes that before issuance of this notice, there was a misunderstanding by some that a pistol assembled with any item purported to be a stabilizing brace still would be considered a ‘pistol’ regardless of other characteristics,” the Bureau of Alcohol, Tobacco and Firearms admits in its “Objective Factors for Classifying Weapons with ‘Stabilizing Braces’” rulemaking proposal, posted and accepting comments now at Regulations.gov. “The objective factors discussed here make clear that while some stabilizing braces may lawfully be used on pistols without bringing the firearm within the purview of the NFA, that is not necessarily the case for every ‘pistol’ because some firearms are configured or have characteristics such that they meet the statutory definition of ‘rifle or shotgun’ (hereafter, ‘affected stabilizer-equipped firearms’).”

That any misunderstanding exists is solely on the Bureau.

The contradictory on again/off again back-and-forth over what is or is not considered whatever they want to call it is pretty much their M.O. One day you’re the satisfied owner of the lawfully-obtained property; the next, government diktat transmutes it into a forbidden liability, with life-destroying felony implications for anyone innocently caught up in a capricious bureaucratic net cast by people who either can’t make up their minds or have their minds made up for them by hidden, politically-motivated string pullers.

“ATF understands that most individuals who acquired affected stabilizer-equipped firearms did so in good-faith reliance on representations, made by those selling the stabilizing braces or the firearms, that those firearms were not subject to the NFA,” ATF continues, pointing fingers at and blaming those who rely on its arbitrary rule interpreters to tell them how to navigate through the government’s bureaucratic minefield.

“I can tell you ATF has documented the fact they have not processed industry submissions and are NOT providing guidance to be compliant to the NFA and GCA, but are however more than willing to threaten to prosecute when something is not compliant,”  friend, colleague, and firearms designed Len Savage observed when ATF was still crafting these rules in secret. “They are in effect saying ‘We won’t tell you what’s legal, but we will be more than happy to bust you.’”

They’re saying they won’t – provided they’re convinced that you intend to be obedient.

“Consequently, following issuance of this notice, ATF and DOJ plan to implement a separate process by which current possessors of affected stabilizer-equipped firearms may choose to register such firearms to be compliant with the NFA,” ATF announces. “As part of that process, ATF plans to expedite processing of these applications, and ATF has been informed that the Attorney General plans retroactively to exempt such firearms from the collection of NFA taxes if they were made or acquired, prior to the publication of this notice, in good faith.”

Show them your intentions are submissive and they won’t bring the guns out – yet.

“This separate process may include the following options: registering the firearm in compliance with the NFA … permanently removing the stabilizing brace from the firearm and disposing of it, replacing the barrel of the firearm (16” or greater for a rifle, or 18” or greater for a shotgun), surrendering the firearm to ATF, or destroying the firearm,” ATF recites from its terms of surrender. “Until that process is separately implemented, and absent a substantial public safety concern, ATF will exercise its enforcement discretion not to enforce the registration provisions of the NFA against any person who, before publication of this notice, in good faith acquired, transferred, made, manufactured, or possessed an affected stabilizer-equipped firearms [sic].”

Thanks, guys! That’s mighty considerate of you, especially since you’ve made it more than clear that failure to ask “How high?” when you order “Jump!” will be considered “bad faith,” and bring with it all the attendant enforcement and punishment consequences.

We sure are a far cry from “shall not be infringed,” are we not?

What we’re seeing is an emboldened ATF leadership ramping up those infringements in what looks for all the world like Acting Director Regina Lombardo auditioning for a permanent spot with the Harris administration (and yeah, that was intentional).  Between the braces, colluding with Team Biden and the Polymer80 raid, breaking claims of another company raided over Form 1 suppressor build parts, they are signaling that they are ready, willing, and eager to do whatever it takes to facilitate the Democrat citizen disarmament agenda.

True, we see efforts like the one being led by Gun Owners of America asking Donald Trump to fire Lombardo. I wish them well and I have signed their petition myself, but I’m not holding my breath – on top of having his hands full with “stop the steal,” Trump hasn’t exactly shown himself to be truly understanding of the Second Amendment, especially with the “bump stock” rule his administration imposed. Nor has he been receptive to petitions that point out simple truths and ask him to do easy things. That and we don’t know what his advisors are telling him about how such a move will play in the press for him, and what kind of pile-on he could then expect from outspoken “moderate” Republicans looking to virtue signal for the media.

For the record, I hope he proves me dead wrong.

I encourage every gun owner advocate to comment before the January 4 cutoff. No, I don’t think it will do any good at changing anyone’s minds—they’re telling us what they’re going to do and this is just a formality. Feel free to argue logic and law and technology if you’re capable and so inclined, but my message to them will be a lot simpler:

If there is not massive noncompliance with the rule that comes out of this, they’ll only be encouraged when the time comes to order the surrender of our semiautomatics.

I can only tell you what I have done in the past when confronted with similar demands.

I understand there will be some of you who won’t want to comment because you “don’t want to be on any lists.” It’s a little late for that, and if you exercise a bit of commonsense restraint and don’t write anything “actionable,” you will be well within your rights.

We’re never going to secure freedom if a critical mass is afraid to even speak out.