ATF to Publish ‘Factors for Classifying Guns with Stabilizing Braces’ 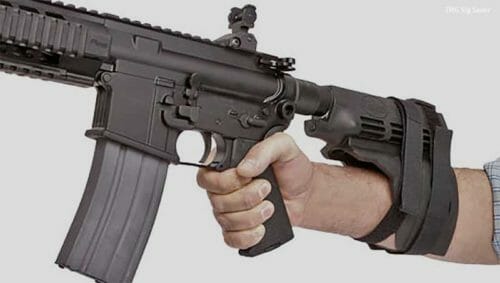 U.S.A. -(Ammoland.com)- Documents leaked to several media outlets Wednesday show the Justice Department is moving to publish in the Federal Registry on Friday, December 18th, 2020 a document titled “Objective Factors for Classifying Weapons with Stabilizing Braces” ( embedded below). Note the document itself is not a ban on pistol braces but it does lay the groundwork for extensive restrictions on what firearms can have the Stabilizing Brace accessories in the typically convoluted and vague ATF fashion.

Not a Pistol Brace Ban…Yet

As AmmoLand has reported, the Bureau of Alcohol Tobacco Firearms and Explosives (ATF) spoke with the Biden transition team. Regular readers of Ammoland News were aware that ATF’s top two priorities were 80% receivers & frames, and pistol braces. In recent days the ATF has moved on 80% frame kits, and now the ATF is issuing a “guidance letter” on how they “Objectively” plan to judge all makes and models of pistol stabilizing brace accessories #ad on firearms.

The first thing that jumps out in this document is page 12 that says, “the contents of this document do not have the force and effect of law and are not meant to bind the public in any way“!? (Emphasis added for clarity.)

Then we get into the “Objective” Parts.

The ATF says that large caliber firearms equipped with a brace are impractical to fire because of recoil of the caliber of the round. Yet, the ATF fails to define or set parameters for which rounds would constitute disqualifying calibers, leaving it up to interpretation.

Another factor is the overall weight of the gun. The ATF says that heavy pistols equipped with a brace are “likely to be considered a rifle or shotgun.” Seems the ATF believes that heavy firearms are impractical for braces. The ATF also states that if a gun is equipped with a drum magazine or other magazines holding multiple (number not specified) rounds, it will make the gun too heavy to be considered a pistol when a brace is attached. What is disturbing is that the ATF does not state how many rounds change the property of the firearm.

Again, the ATF doesn’t specify a weight, or which calibers would be unacceptable for a braced pistol.

The ATF also considered the length of pull of firearms, and under this new guidance document, most if not all braces equipped on AR15 or AK47 type pistols would fail this proposed test. If the brace uses a spacer or other buffer attachment found on a rifle, then the ATF will consider the firearm a rifle or shotgun. Once again the ATF doesn’t give specifics leading many to wonder what type of gun private citizens would have in their possession.

This uncertainty is like giving the police the power to give you a speeding ticket without you having the right to know what the speed limit is on a given road.

Additionally, ATF states that if a brace’s design is similar to a known stock, then that brace itself would be considered a stock. If the pistol has rifle sights, it will turn it into a rifle or shotgun if equipped with a brace. Bipods on a firearm will also turn the pistol into a rifle if it has a brace attached. All braces are similar to stock designs. Does the ATF say that all stabilizing braces fail this test?

The ATF says that each firearm must be examined on a “case-by-case” basis. Except with all the caveats the agency added, it seems unlikely that any rifle-caliber-pistol would pass muster and each would be found to be a short barrel rifle if only one of the criteria is needed to be failed.

The Department of Justice is opening up a two-week public comment period over the proposed changes in the Federal Registry on Friday, December 18th, 2020 ending on January 1st, 2021. The timing of the narrow 14 day comment period with the number of holidays is suspect when most of America is away from work celebrating the Holidays with family. Some believe the timing a week before Christmas was chosen on purpose.

According to the leaked document, owners will have four choices in the eyes of the DOJ and ATF; They can destroy the braced firearm, change out all the prohibited parts converting the weapon into something else, turn over the gun to the government, or register their guns as SBRs in accordance with the National Firearms Act (NFA).

The letter states that for gun owners who acquired the devices in “good faith” the government would exempt firearms owners wishing to register them as NFA weapons from paying the $200 NFA tax stamp because of the policy change. But their guns will be forever an NFA item, registered with the government and subject to all the restrictions that come with having an NFA weapon. This would be the biggest gun registration in history with estimates of 4 million to 6 million stabilizing braces in public hands in the USA.

It is unclear just how the ATF would handle the onslaught of tax stamp applications and how it would affect current wait times. If only 25% of brace owners chose this option the ATF would be flooded with one million-plus submissions. The ATF staff would be overwhelmed. Each ATF employee would be faced with over 100,000 applications in addition to the current NFA application load. This backlog would create an even bigger artificial backlog for SBRs, SBSs, silencers, and machine guns. Many gun-rights advocates believe this roadblock to be intentional.

Under the proposed guidelines ATF agents will have discretion on enforcing the new regulations for a while to allow gun owners to come into compliance with the new standards, but as highlighted above, the document doesn’t do much to specify the standards. Many gun-rights advocates including Gun Owners of America’s Senior Vice President, Erich Pratt, sees these moves as further infringements on the gun rights of Americans.

“If there were any lingering questions as to how far ATF has gone off into the deep end, this document settles it,” Pratt told AmmoLand News. “The ATF is the embodiment the word ‘infringement,’ and GOA is prepared to combat its actions at every turn. GOA will rally the grassroots to fight these regulations, and if they eventually go into effect, we will commence immediate legal action to protect gun owners. This ATF is simply out of control. This agency — which shouldn’t exist in the first place — is not held accountable for its actions, and the honest gun owners who are being turned into criminals are paying the price.”

The document’s stated goal is to clear up confusion around pistol braces and let gun owners and manufacturers know what is legal. If that was the actual goal then the ATF failed miserably. The big take away from the letter is that there is no way to know if you created an NFA item. If you find out that you did create one then that means that it is too late and you need to register your firearms or are likely to face charges in the future. In our opinion, this charge of rules is a blatant attempt to create a gun registry through legal trickery.

Top industry representatives are aware of the document and are pledging to follow up.

NSSF has long urged ATF to provide a clear, objective standard for stabilizing arm braces for industry to understand and apply (self-classify) so that thy manufacturer and sell legal firearms for consumers to purchase from licenses retailers after a background. NSSF is carefully reviewing the notice and seeking input from our members We will submit public comment in a timely manner. ~ Lawrence G. Keane, Senior Vice President for Government & Public Affairs, NSSF

Beginning Friday the public can leave comments at Objective Factors for Classifying Weapons with Stabilizing Braces.

Stay tuned to AmmoLand.com for all the latest information on this developing story.

The post ATF to Publish ‘Factors for Classifying Guns with Stabilizing Braces’ appeared first on AmmoLand.com.