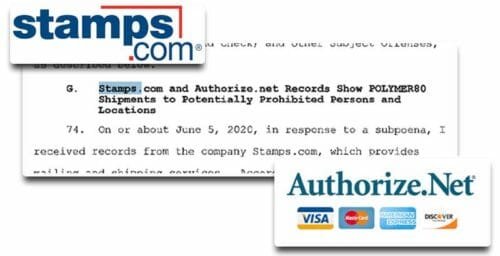 U.S.A. –-(Ammoland.com)-The ATF’s affidavit to obtain the search warrant (embedded below) against Polymer80 confirms the raid’s target was the company’s “Build, Buy, Shoot” kits. The affidavit also says Polymer80 did not supply the customer list that the ATF used in its investigation.

The ATF then ran the customers through the FBI NCIC system to see if those who made purchases were prohibited from buying firearms. Customer records obtained by the ATF were for purchases made between January 1st, 2019 and June 4th, 2020.

The ATF found that there was a total of 9100 purchases from California and 51,000 purchases nationwide. Of these purchases, the company sold 1490 ‘Buy, Build, Shoot” nationwide. Customers in California purchased 202 of the kits. One California man purchased $22,000 worth of Polymer80 products within two months. The ATF is assuming that the man in question is selling the guns on the black market.

The ATF Warrant also points to a couple of kits that the agency determined someone shipped overseas. According to the agency, shipping the 80% frame overseas is a violation of “The Arms Export Control Act.” ATF Special Agent Tolliver Hart said that he used his experience to determine that international arms traffickers use the internet to acquire firearms and firearm parts. The ATF used these two cases to justify the raid further.

Another justification the ATF gave for the raid is that 18-year old adults have purchased products from Polymer80. It is not illegal in most states for an 18-year-old to buy a pistol. The ATF artificially raises the age to buy a pistol by demanding a gun shop customer be 21 to buy a handgun.

The ATF claims that Polymer80 posted a video to its Instagram account showing someone stating that you don’t have to go through a background check to buy an 80% frame. This statement was and still is true. By law, 80% frames are chunks of plastic still, not handguns.

It seems like the ATF wants Polymer80 to market its frames as firearms, which could muddy the waters even further.

Also, in the affidavit, it is mentioned that in 2018 that Polymer submitted the kit to the ATF that included the jig, locking block, and drill bits for approval. The ATF appears to have approved that kit, but for some reason, believes that the inclusion of a lower parts kit somehow changes the property of the product, making it a firearm. If the company didn’t include the lower parts kit in the package, then it appears that the ATF would have had to produce another reason to raid the company.

The document does confirm that Polymer80 did go above and beyond its legal responsibility by asking customer 4473 “like” questions before allowing them to check out.

If a customer did not check the box, they would not be able to purchase products from Polymer80. California and the federal government have a history of believing that criminals obey signs and warnings, so this should reassure them that the company was doing everything in their power to prevent the 80% frames from falling into the wrong hands.

The documents show that the ATF case against Polymer80 was built on circumstantial evidence. Many believe the real reason for the raid was to get more customer information. In our opinion Polymer 80 and their customer’s got ratted-out to ATF by Stamps.com and Authorize.net. Let this be a lesson to the firearms industry be careful who you do business with.